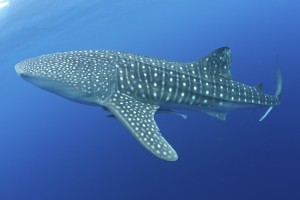 Reaching a maximum length of 18 metres and weighing up to 21 tons, the whale shark (Rhincodon typus) is the world’s largest fish and is found circumglobally in tropical and temperate seas. Though we know surprisingly little about the natural history and behaviour of these massive animals, they are known to gather seasonally in large numbers at specific areas around the globe.

One such recently documented whale shark gathering is in Cendrawasih Bay in the Bird’s Head Seascape of West Papua. Scientists from Conservation International and the State University of Papua have been studying this aggregation since 2010, and since mid-2015, Conservation International has pioneered the use of finmount satellite tags on the whale sharks of Cendrawasih. This has allowed for significantly higher resolution tracking of the movements of these sharks than was previously possible. The satellite tagging has already revealed that many individual sharks make significant journeys out of the bay (some as far away as Yap or northern Australia!), as well as making frequent deep dives below 1000m depth – occasionally going as deep as 1800m or more!

The University of Adelaide’s Centre for Applied Conservation Science is proud to now join forces with Conservation International in this ground-breaking study, having just purchased an additional 6 finmount satellite tags that will be deployed over the coming months. Once deployed, the data from these satellite tags will be displayed on Conservation International’s “whale shark tracker” webpage, allowing the general public to track the movements of these sharks in near real-time. Look for more updates on this exciting new collaboration in the coming months!

If you would like to learn more about the Centre for Applied Conservation Science or to explore potential for engaging with Conservation International, please contact Prof. Lian Pin Koh (lianpin.koh@adelaide.edu.au).

Where are the whale sharks going? Guest Blogger Ana Sequeira