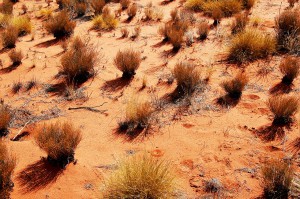 Australia’s arid zone has spread throughout history, and has had a transformative impact on many species. New research has investigated the evolutionary history of spiny trapdoor spiders, in response to changes in Australia’s arid environment.

Published in Molecular Phylogenetics and Evolution, and co-authored by the Environment Institute’s Professor Andy Austin, the paper has been ranked as the ‘Editor’s Choice’ for this edition of the journal.

Josephine Hyde is a PhD candidate at the Environment Institute’s Australian Centre for Evolutionary Biology and Biodiversity (@DNArthropods). Josie has written an exclusive guest post for the Environment Institute blog on her research of microfauna in very isolated habitats in remote WA published in Marine and Freshwater Research. Studying freshwater animals may seem like a weird […]

A paper published in PLOS One today by PhD candidate Sophie Harrison and Professor Andy Austin today tells the origin story of Trapdoor Spider’s arrival in Australia. This new paper challenges the previous theory the spiders arrived in Australia during the break up of the supercontinent Gondwana 95 million years ago. However, the genetic analysis conducted […]

An Australian trapdoor spider, which usually moves no further than a couple of metres from where it was hatched, must have travelled to Australia over the Indian Ocean from South Africa, University of Adelaide research has shown. Found only on Kangaroo Island off the coast of South Australia, the trapdoor spider – Moggridgea rainbow – […]

Recent surveys by Australian scientists have identified an apparent significant decline in the numbers of trapdoor spiders across southern Australia Famous for their carefully camouflaged burrows – some with lids or ‘trapdoors’ from which they launch themselves to catch their prey – trapdoor spiders are remarkable animals. The females of some species are known to […]

A 400 hectare piece of land in South Australia’s outback, 400 kilometres north-east of Adelaide, is providing important data to help researchers and land and environmental managers understand arid zone ecology and the impacts of grazing by sheep and pests. The Koonamore Vegetation Reserve, located in the centre of Koonamore Station, is one of the world’s oldest […]