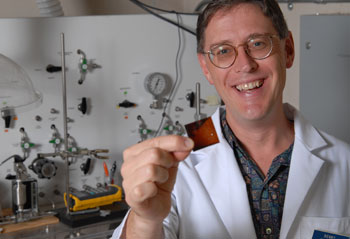 Professor Benny Freeman from the University of Texas will present a seminar. Professor Freeman is a Fulbright Fellow and while the abstract sounds tech-heavy, it will be catered towards a general audience.

Charged polymer membranes are widely used for water purification applications involving control of water and ion transport, such as reverse osmosis and electrodialysis.  Efforts are also underway worldwide to harness separation properties of such materials for energy generation in related applications such as reverse electrodialysis and pressure retarded osmosis.  Additional applications, such as energy recovery ventilation and capacitive deionization, rely on polymer membranes to control transport rates of water, ions, or both.  Improving membranes for such processes would benefit from more complete fundamental understanding of the relation between membrane structure and ion sorption, diffusion and transport properties in both cation and anion exchange membrane materials. Ion-exchange membranes often contain strongly acidic or basic functional groups that render the materials hydrophilic, but the presence of such charged groups also has a substantial impact on ion (and water) transport properties through the polymer.

We are exploring the influence of polymer backbone structure, charge density, and water content on ion transport properties.  Results from some of these studies will be presented, focusing on transport of salt, primarily NaCl, through various neutral, positively charged and negatively charged membranes via concentration gradient driven transport (i.e., ion permeability) and electric field driven transport (i.e., ionic conductivity).  One long-term goal is to develop and validate a common framework to interpret data from both electrically driven and concentration gradient driven mass transport in such polymers and to use it to establish structure/property relations leading to rational design of membranes with improved performance.

Ion sorption and permeability data were used to extract salt diffusion coefficients in charged membranes.  Concentrations of both counter-ions and co-ions in the polymers were measured via desorption followed by ion chromatography or flame atomic absorption spectroscopy.  Salt permeability, sorption and electrical conductivity data were combined to determine individual ion diffusion coefficients in neutral, cation exchange and anion exchange materials. Manning’s counter-ion condensation models and the Mackie/Meares model were used to correlate and, in some cases, predict the experimental data.

As part of the Department of Ecology & Environmental Science Seminar Series Professor Bob Hill Executive Dean, Faculty of Sciences University of Adelaide, and Director, Environment Institute will presented a seminar entitled: Fire, Air, Earth, Water – the elemental drivers of the Australian vegetation. Abstract The living Australian vegetation is the end result of hundreds of millions of years of evolution, but […]