What makes “ghost mushrooms” glow in the dark? 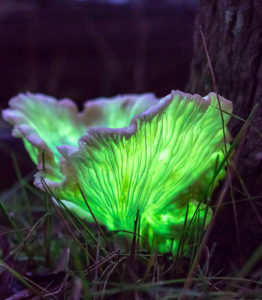 Photographers and tourists alike have been on the search recently for Omphalotus nidiformis, a type of mushroom which produces a luminescence.

The mushrooms can be found in South Australia in the wetter months of autumn and winter near Mt Gambier.
Professor Philip Weinstein from the University of Adelaide and the Environment Institute, says the ghost mushrooms are found in moist woodlands because they feed off dead trees and rotting wood.

There has been some debate about why the mushrooms glow, whether it’s due to defence or attracting food. Professor Weinstein disagrees with both suggestions:

“My studies find that the glow from these particular mushrooms is more likely a chemical accident,” he says.

He says a chemical in the mushroom called luciferin is changed by another substance and in the process gives off light.

To see this delightful nighttime scene for yourself, Forestry SA and a local photographer have made the area has been opened until the end of June.

Just beware: they may look pretty but they’re poisonous and shouldn’t be touched or eaten.