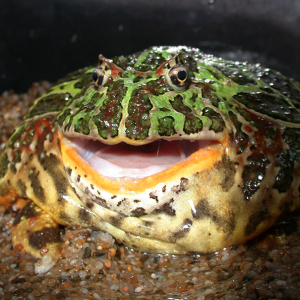 Scientists say that a large, now extinct, frog called Beelzebufo that lived about 68 million years ago in Madagascar would have been capable of eating small dinosaurs.

The conclusion comes from a study of the bite force of South American horned frogs from the living genus Ceratophrys, known as Pacman frogs for their characteristic round shape and large mouth, similar to the video game character Pac-Man. Due to their attractive body colouring, voracious appetite, and comically huge heads, horned frogs are very popular in the international pet trade.

“Unlike the vast majority of frogs which have weak jaws and typically consume small prey, horned frogs ambush animals as large as themselves – including other frogs, snakes, and rodents. And their powerful jaws play a critical role in grabbing and subduing the prey,” says Dr Marc Jones, researcher at the University of Adelaide’s School of Biological Sciences and honorary researcher at the South Australian Museum.

The study found that small horned frogs, with head width of about 4.5cm, can bite with a force of 30 newtons (N) or about 3 kg or 6.6 lbs. A scaling experiment, comparing bite force with head and body size, calculated that large horned frogs that are found in the tropical and subtropical moist lowland forests of South America, with a head width of up to 10 cm, would have a bite force of almost 500 N. This is comparable to reptiles and mammals with a similar head size.

“This would feel like having 50 litres of water balanced on your fingertip,” says Professor Kristopher Lappin, Professor of Biological Sciences at California State Polytechnic University – Pomona.

Based on their scaling relationship, the scientists estimated the bite force of the giant extinct frog Beelzebufo – which is in many ways similar to living horned frogs – may have had a bite up to 2200 N, comparable to formidable mammalian predators such as wolves and female tigers.

“At this bite force, Beelzebufo would have been capable of subduing the small and juvenile dinosaurs that shared its environment,” says Dr Jones.

The scientists measured bite force using a custom-made force transducer, a device which accurately measures the force applied to two plates covered with leather when an animal bites them.

“This is the first time bite force has been measured in a frog,” says Professor Lappin. “And, speaking from experience, horned frogs have quite an impressive bite, and they tend not to let go. The bite of a large Beelzebufo would have been remarkable, definitely not something I would want to experience firsthand.”

Sean Wilcox, a PhD candidate at the University of California – Riverside, says: “Many people find horned frogs hilarious because of their big heads and fat, round bodies. Yet, these predators have given us a rare opportunity to learn something more about the biology of a huge extinct frog.”

Dr Marc Jones writes a guest post on his latest paper on bite force in reptiles Among animals there is great variation in skull shape, and this is related to a variety of environmental factors such as diet and life style. The shape of an animal’s skull is closely linked to its function: the skull […]

Dr Marc Jones has been honoured with Lanzendorf Paleoart Prize

October’s Science in the Pub is on ecology!

This month’s Science in the Pub held at the Rob Roy Hotel has a focus on ecology. Environment Institute member Dr Marc Jones who is an ARC DECRA Fellow, and Honorary researcher at the South Australian Museum is speaking this Friday. Dr Jones has received wide spread media coverage this year with his most recent […]

The Scientific Reports article on the bite force of the extinct Horned Frog dubbed Beelzebufo has received worldwide media attention over the weekend. These results were gained from a model based on the South American horned frogs from the living genus Ceratophrys, and scaled to the large Madagascan extinct frog. These results indicate the Beelzebufo […]

New research by Marc Jones is looking at new ways to measure the bit force of lizards. Bite force performance in animals is important, because it can allow or limit dietary options. Read more in the latest issue of eScience mag.

This entry was posted in Media Release and tagged Dr Marc Jones. Bookmark the permalink.