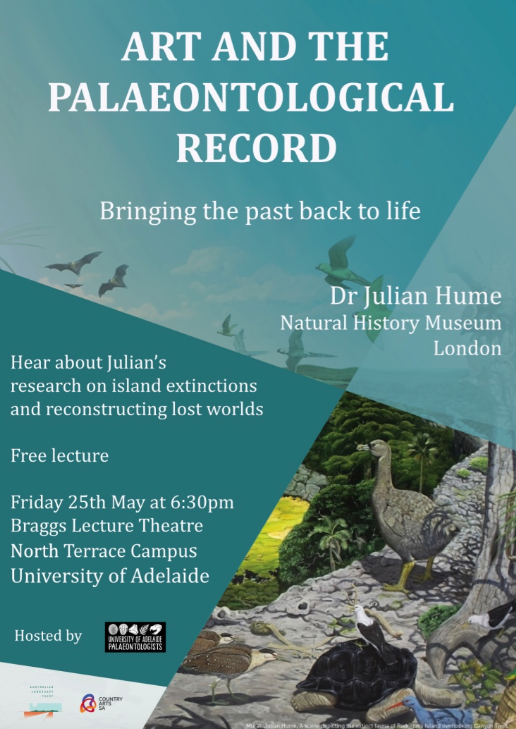 Internationally renowned, Dr Julian Hume, Natural History Museum London, is in Adelaide working on a collaborative palaeontological art project, to produce two paintings depicting megafauna and biodiversity. He will be speaking about the paintings, his work and taking audience questions. 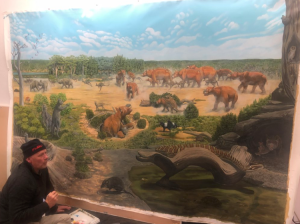 Julian is an avian palaeontologist who studies island extinctions and faunas from Madagascar, Mauritius, Rodrigues and other sites including King Island and Tasmania. He is also an well-known artist and uses art to reconstruct lost worlds and extinct animals. He has consulted on projects with David Attenborough and many others, and written five books on extinct birds julianhume.co.uk

Julian’s recent works produced during this visit, depicts the time just prior to megafauna extinction (around 50,000 years ago) and the other a scene showing the biodiversity just 300 or 400 years ago prior to European settlement. His stories tell of extinction and biodiversity loss, which works well with the palaeoconservation message of using the past to inform us about the present and future. The fossil record gives us the long time-frame of biodiversity records to give us a broader dataset for conservation management and research.

Julian’s painting of the megafauna is based on Naracoorte fossil deposits where Dr Elizabeth Reed worked with him on the types of animals found and habitats. The other work is based on the Renmark area.

Event hosted by University of Adelaide Palaeontologists with support of The Australian Landscape Trust and Country Arts SA.

Bringing the past back to life

Paleoclimate variability in the Mediterranean region during the last 1.4 Ma and a new multiproxy approach using trace metal isotopes for more quantitative estimates of climate-human-landscape interactions Who:  Alex Franke from the University of Wollongong When: Friday 2nd March, 3-4 pm, Where: Mawson Lecture Theatre, Mawson Building, University of Adelaide. The Mediterranean region and its […]