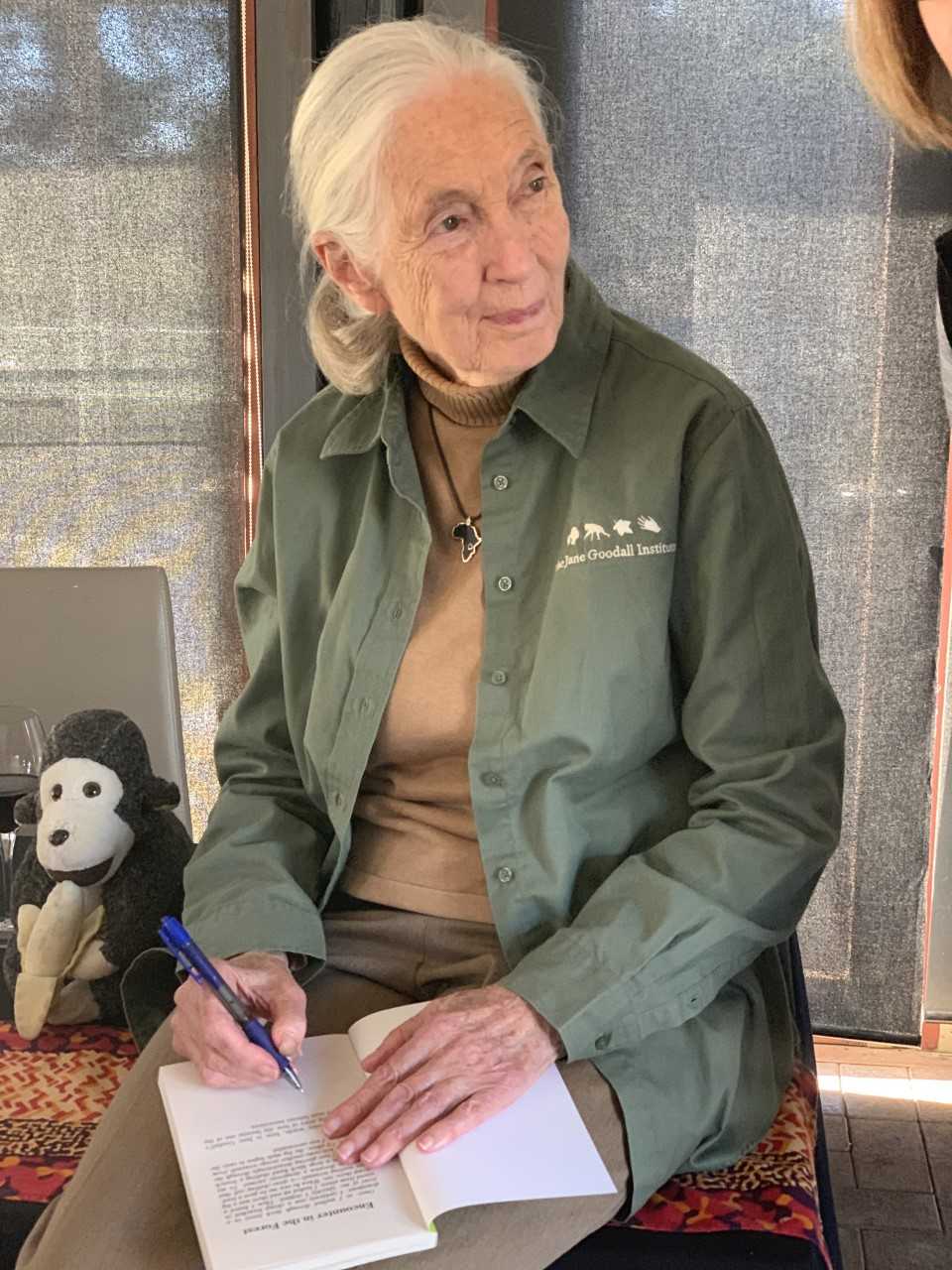 Last week saw the celebration of the 10th anniversary of the chimpanzee enclosure at Monarto Zoo, which coincided with a visit to Adelaide by world-renowned primatologist Dr. Jane Goodall, who opened the enclosure back in 2008. This most recent visit was for the last stop in the Australian leg of her global Rewind the Future 2019 tour, which concluded in Adelaide. During the visit to Monarto, Jane Goodall spoke to a gathering of sponsors, volunteers, researchers and zoo staff at the chimpanzee enclosure, and then again over a vegetarian lunch catered by The Adelaide Oval, proudly sponsored by the Environment Institute.

Jane was the first to reveal the impending birth of a new baby chimpanzee, expected in the spring of this year, and visited the recently born baby chimp ‘Hope’, who she had also been asked to name. Over lunch she generously entertained the gathering with stories and anecdotes about her career studying Chimpanzees, and working for their protection and conservation. She revealed to the audience that despite now being aged 85, since 1986 she has “never in one place for more than three weeks at a time”, living a life constantly on the road to raise awareness for the plight of the remaining wild Chimpanzees, and campaigning for greater awareness of environmental issues. She talked at length about the advocacy and conservation work done by The Jane Goodall Institute, and the new youth program Roots & Shoots, and encouraged people to get involved with the good work these organizations are doing.

Demonstrating the kind of work that the Jane Goodall Institute has been doing, Jane’s parting story was of a chimp named Wounda. Wounda was injured by poachers before being rescued and saved by the worlds first Chimpanzee blood transfusion, performed by veterinary scientist Dr. Rebeca Atencia. After being rehabilitated Wounda was released onto an island sanctuary recently acquired by the Jane Goodall Institute, and although had never met Jane Goodall before, gave her a hug which Jane called “one of the most amazing things that has ever happened to me.” [See video below]

There was hardly a dry eye in the house at the end of Jane’s talk. It was hard not to be encouraged by her message of hope, and inspired by her tireless commitment, passion and dedication to the natural world and its conservation. We wish Jane all the best for the rest of her tour, which see’s her next in New Zealand. If you would like to find out more about the work that Dr. Jane Goodall is doing along with the Jane Goodall Institute, or you would like to become involved in any way, please visit https://www.janegoodall.org.au/, and consider becoming a member, a volunteer or sponsor.