How much do we know about very own impact on the oceans?

Posted on September 9, 2020 by Annemarie Gaskin 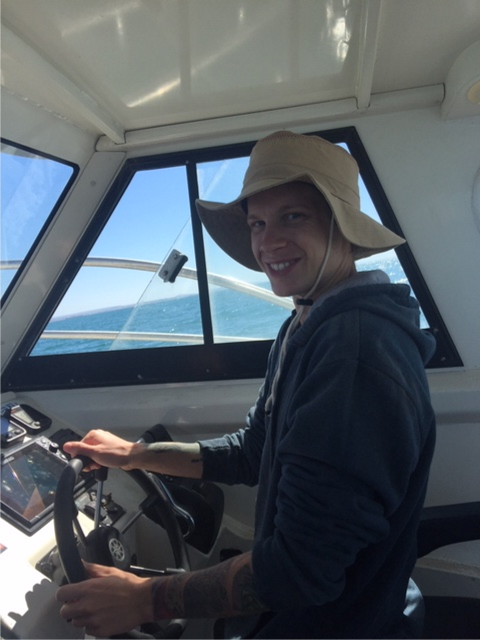 Are human-induced stressors on our oceans interacting in more complex ways than we first thought?

As undergraduate students and keen documentary viewers, we are often shown maps and figures which paint a grim picture of our impact on the ocean. Between overfishing, pollution and climate change, humans seem to be turning even the most pristine oceans into a warm, acidic, plastic soup. However, there is a question that we would like to see asked more, what are these maps and figures based on? How were these maps created? The answer, is spatial models.

When I slowly started to delve deeper into the world of statistical models, I came across a quote by British statistician, George Box, which states, “all models are wrong, but some are useful”. This quote begs a question, how wrong are the models which create these human impact maps? Are they overestimating our impact and causing worldwide panic? Or are they underestimating our impact, leading to the neglect of an ecosystem which desperately needs more help. Here, rather than ask how, we address one of the reasons why these models may be inaccurate. 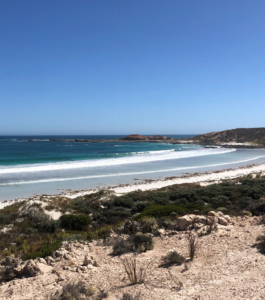 The beautiful south Australian coast line where many endemic seagrass species are subjected to multiple stressors. Photo by Sophie Dolling

The combined impact of multiple, concurrent stressors on a location is known as the cumulative impact, and the maps which depict our cumulative impact on the oceans are often based on additive models. What this means, is that the impact caused by one human-induced stressor can be simply summed to that of a second stressor, and a third and so on, to calculate the cumulative impact. However, non-additive stressor interactions should also be considered. Synergies occur when one stressor exacerbates the impact of another, whereas an antagonism can occur if one stressor mitigates another. Cumulative impact models often do not include these non-additive interactions, and this is likely to produce inaccurate results. But how inaccurate? 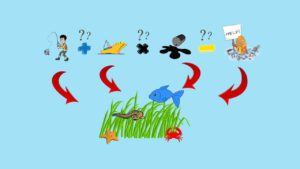 How do stressors interact and combine to impact seagrasses?

In our paper, we have conducted a meta-analysis of studies that looked at the impact of multiple stressors on seagrass and were able to classify whether the multiple stressors had simple additive effects or whether they interacted in a synergistic or antagonistic way. Our main aim was to find out just how common non-additive interactions between stressors were. 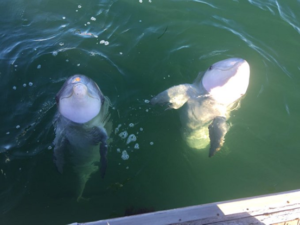 Two dolphins came to check on our progress during seagrass surveys

The bad news? Non-additive interactions are common in seagrass ecosystems. Additive interactions are still the most common (they were found in 57 % of the studies we assessed); but there are many synergies and antagonisms which will cause inaccuracies in cumulative impact models that assume all stressors are additive. This should ring alarm bells, since not only are we underestimating cumulative impact when synergies are occurring, but we may also be cause unintended damage by removing stressors that actually mitigate others. We should be focussing on finding out how stressors are interacting in specific regions so that we can ensure we are removing the stressors which are causing the most damage. And the good news? Well, we are pushing for more marine fieldwork, which means more chance of working with and helping these little folks.

We hope that the results of this study will lead to more accurate cumulative impact maps so we can more accurately predict how we are impacting the oceans. 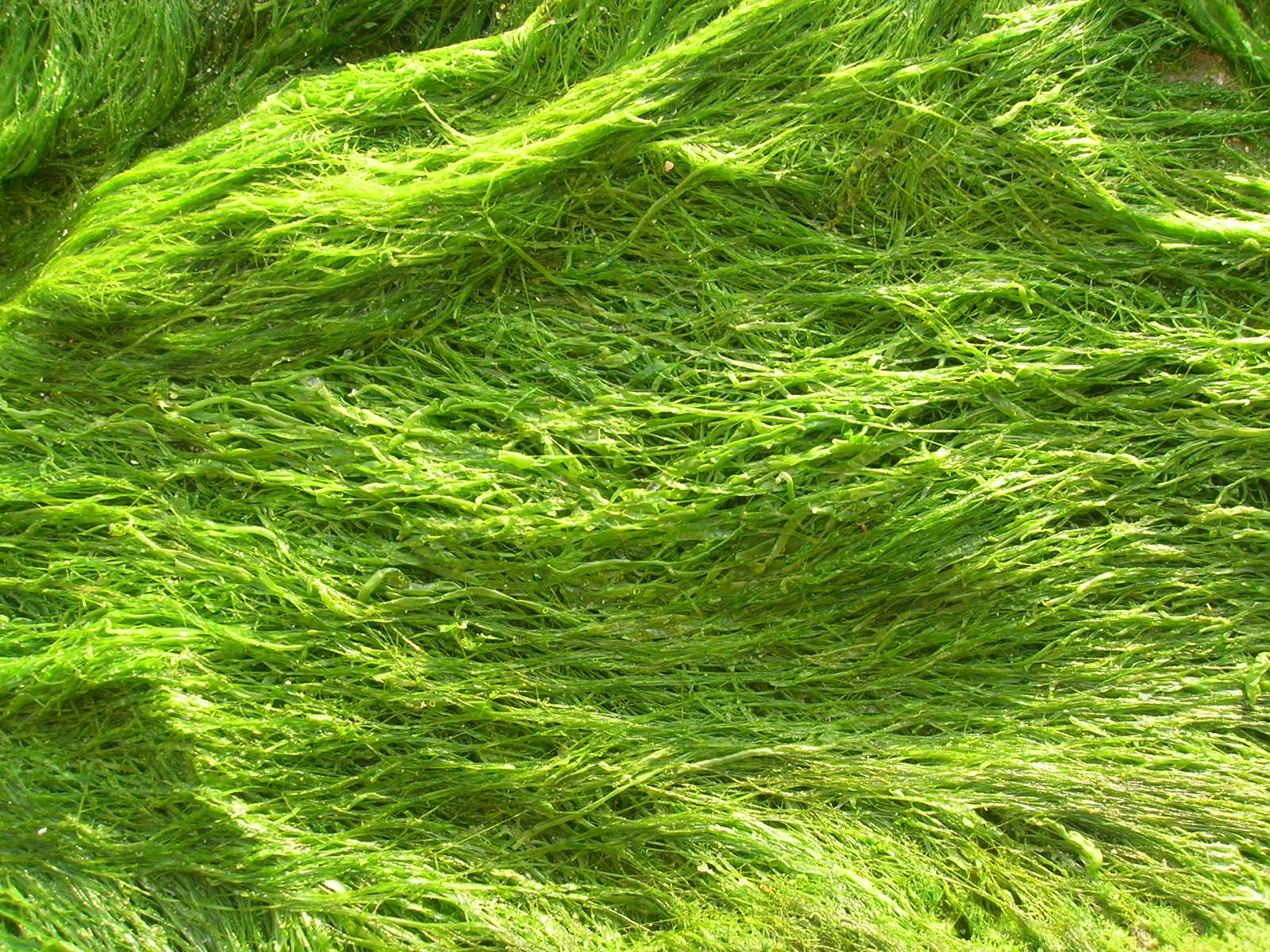 Researchers at the University of Adelaide have been mapping large-scale seagrass cover and genus distribution on South Australia’s temperate coast. Seagrasses are environmentally and economically important. They provide ecosystem services for humans including the provision of habitat for commercial species, protection of infrastructure from erosion and sea level rise, and improved water quality through nutrient […] 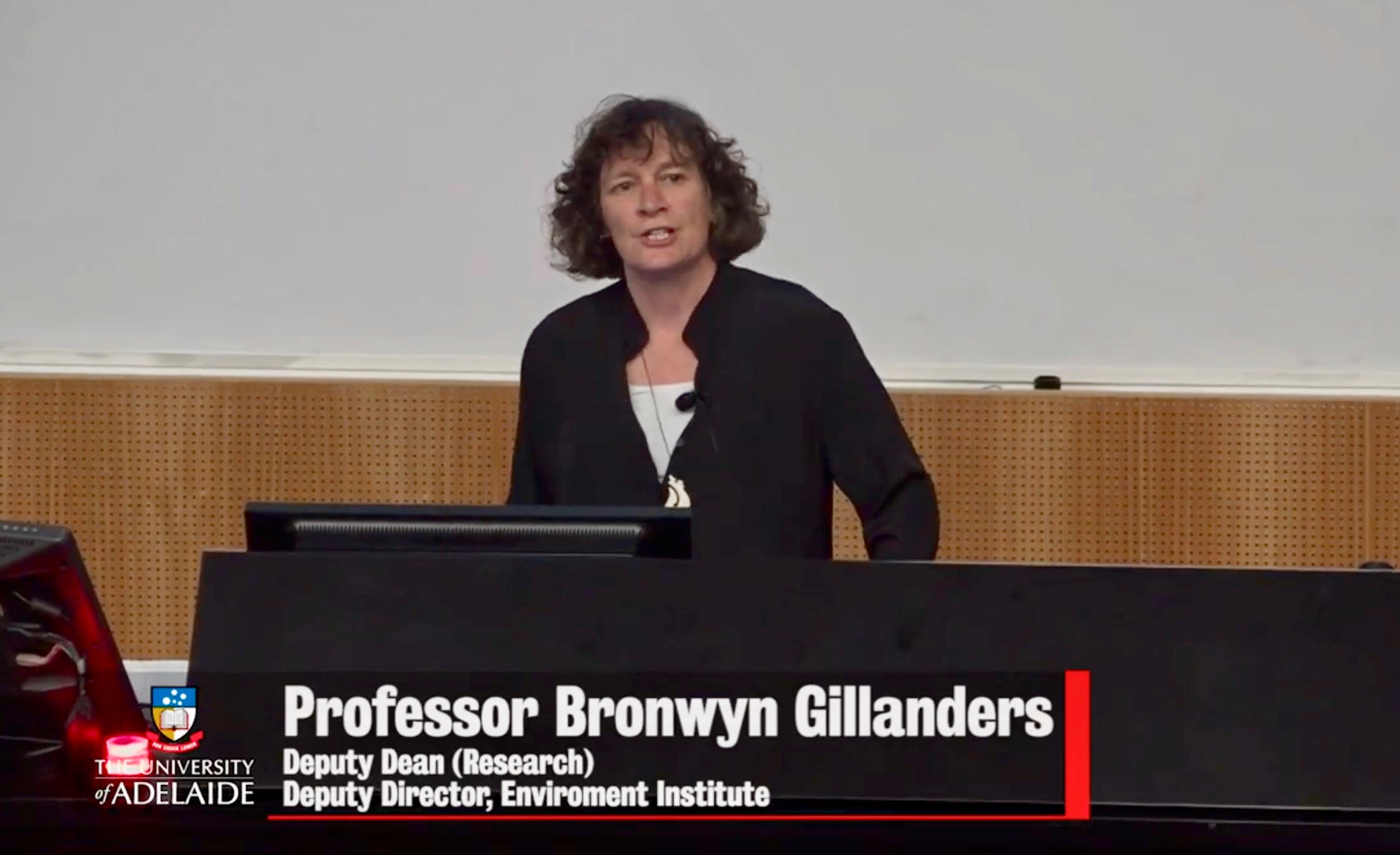 At the Environment Institute and Centre for Energy Technology‘s public forum ‘Meeting Australia’s Climate Change Targets: Price, Opportunity and Pathways’, Professor Bronwyn Gillanders spoke on ‘The world’s largest natural carbon sink on earth: The Ocean’. Professor Gillanders is the Deputy Director, Environment Institute and a marine biologist from the University of Adelaide. She is currently leading […] 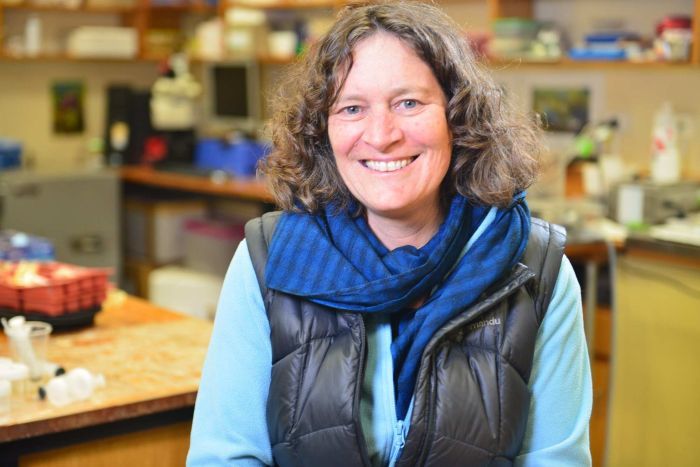 Once know as a ‘dirty, industrial city’, Whyalla, South Australia is becoming a tourism mecca for those wanting to see spawning cuttlefish between May and August each year. It is the only place known to have thousands of these colourful creatures mate (many times), lay their eggs and die before their offspring are born, in one […]