The Third EU-Asia Roundtable was EU Centre’s official inaugural event. It was a roundtable that brought together pre-eminent scholars and experts in the fields of international trade, international economics and political economy from China, Korea, Japan, the EU and Australia.

The roundtable produced a joint statement delivered to G20 Leaders through local Sherpas from participating economies. The overall approach to trade policy in the G20 Leaders Communique appears to have captured, in general terms, the Joint Statement of the participants in The Third EU-Asia Roundtable.

The dinner for the Roundtable was also used as an opportunity to officially launch the EU Centre of Global Affairs. The dinner was attended by the then Governor of SA Kevin Scarce (and the next Chancellor of the University Adelaide). It was officially launched by the Vice Chancellor, Professor Warren Bebbington. Mr Ben Slatter, Trade and Economic Adviser for the EU delegation in Australia and New Zealand, representatives from the UniSA EU Centre, The Hon John Dawkins AO., Professor Christopher Findlay AM., Executive Dean of the Faculty of Professions, EU delegates, Industry representatives and University staff attended the dinner. 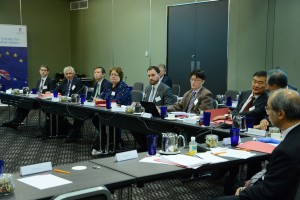 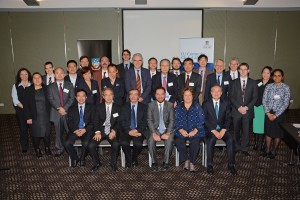 This entry was posted in Events and tagged Asia, EU Centre, Europe, Institute for International Trade, Union. Bookmark the permalink.