On 6 June 2017, the EU Centre for Global Affairs, in collaboration with the Australian Services Roundtable (ASR), the European Australian Business Council (EABC), and MinterEllison, welcomed over 85 interested participants from a broad range of services industry organisations, to engage with a high level panel of informed business speakers, following a Key Note address from the Department of Foreign Affairs and Trade. This business event took place back-to-back with the Europe-Australia Leadership Forum, taking the discussions which had taken place in that context, transitioning it to a broader stakeholder audience that included representatives from the wider business community, in particular SMEs.

We were very lucky to have Laura Tingle, Political Editor for the Australian Financial Review, to moderate the forum, ensuring a concise, content-rich and interactive conversation.

Alison Burrows, Australia’s designated Chief Negotiator for the A/EU FTA reported the finalisation of the comprehensive new treaty-level Australia/EU Framework Agreement, which is expected to be signed in the coming months, as well as completion of the joint scoping study on the FTA, leading the way to likely launch of the negotiations before the end of the year. She outlined Australia’s perspectives and general objectives for the services industries, including for example in telecommunications, financial services and professional services. She also referred to outcomes captured in the proposed text of the Trans Pacific Partnership (TPP) with respect to the digital economy and to investor-state dispute settlement.

Ivano Casella, Counsellor at the Trade and Economic Section of the EU Delegation to Australia and New Zealand, gave a thorough rundown on EU-Australia services trade and investment trade relations, analysing the size and composition of trade flows. He drew attention to the common ground achieved in the negotiations which are now on hold for the plurilateral Trade in Services Agreement (TISA) as a result of which Australia and the EU now know each other very well on the services front. He also provided an up to date briefing on the nature of the European Commission’s mandate on investment.

Pascal Kerneis, Managing Director, European Services Forum, outlined European business interests across several pillars of the FTA, including market access and regulatory disciplines and cooperation, impressing the audience with up-to-date trade in value added data to substantiate his perspectives. He expanded on the EC investment mandate, explaining the recent decision of the European Court of Justice.

Jason Collins, CEO of the European Australian Business Council, usefully coloured the discussion with a broad range of business anecdotes highlighting the very extensive nature of the bilateral commercial relationship.

Over a wide range of discussion on many important issues, two ideas stood out: the importance of a services-focused FTA; and the size and significance of the European Union as a services trading partner. As Jane Drake-Brockman (Director of the EU Centre for Global Affairs) wrote for the EU-Australia Leadership Forum, if we remain focused on merchandise trade, “we risk remaining blind to current Australian business realities.” Data suggests that, now more than ever, an FTA with the EU requires a strong services backbone to fully capitalise on this rich opportunity for Australia.

The EU Centre for Global Affairs is conducting collaborative research with European partners on the Australia/EU FTA and will present additional findings to the business community at an event to be hosted in October 17 in Melbourne.

Please subscribe to our email list to receive frequent updates on events, news, and proceedings from the EU Centre. 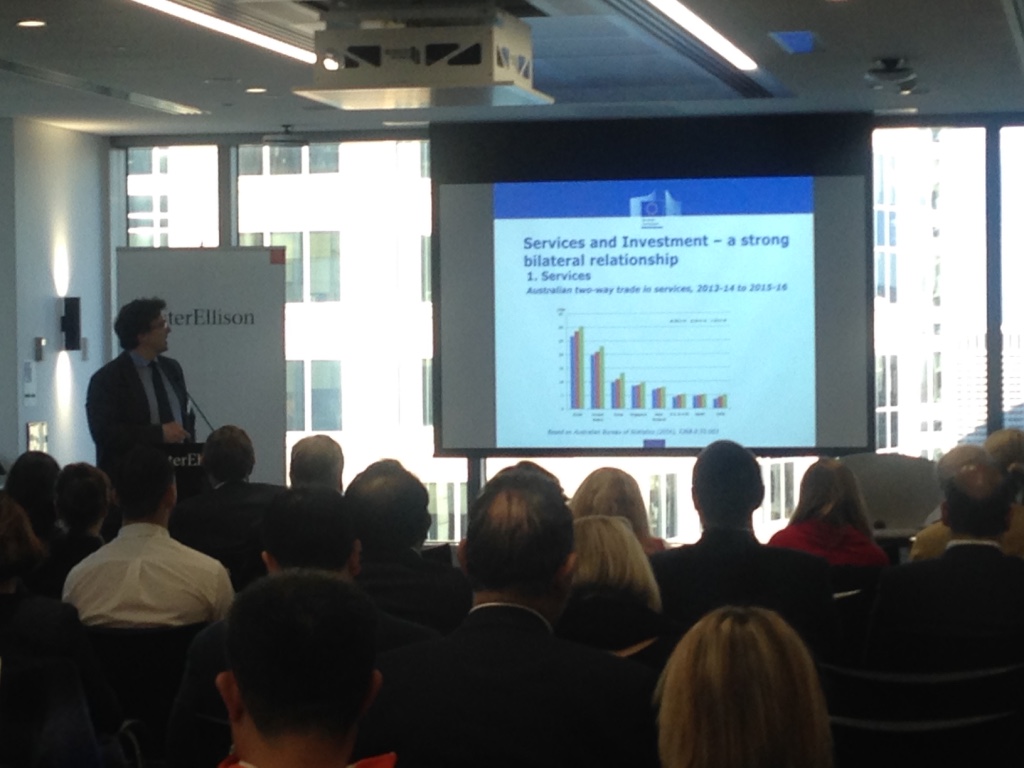 Ivano Casella, Counsellor at the Trade and Economic Section of the EU Delegation to Australia and New Zealand 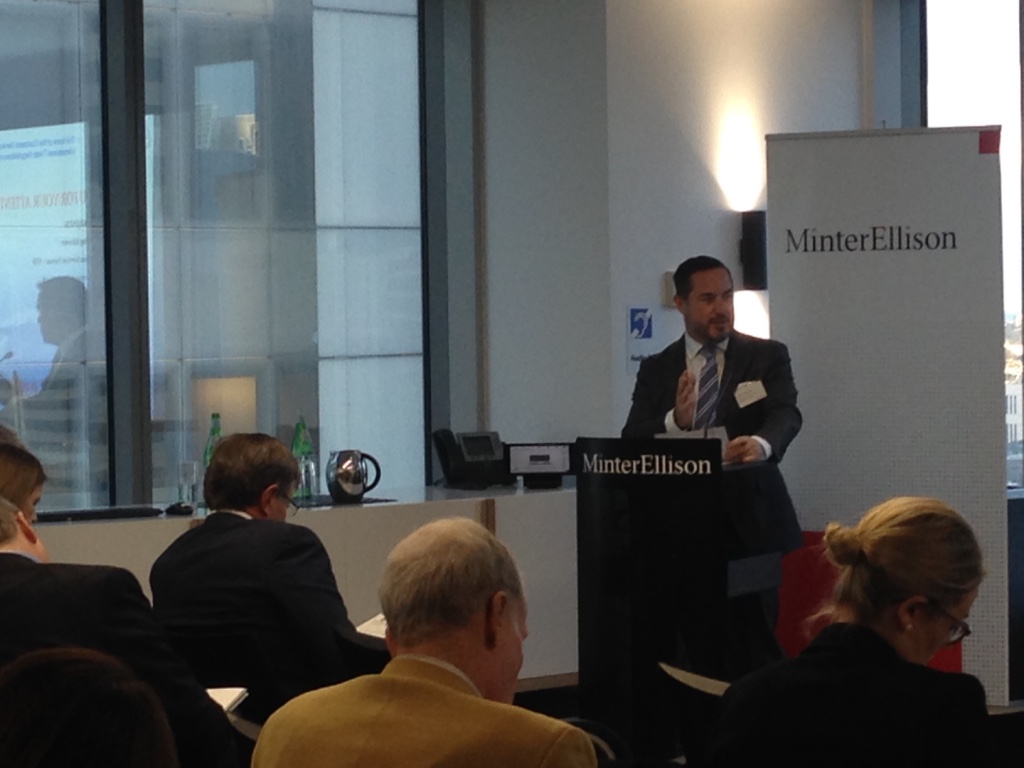 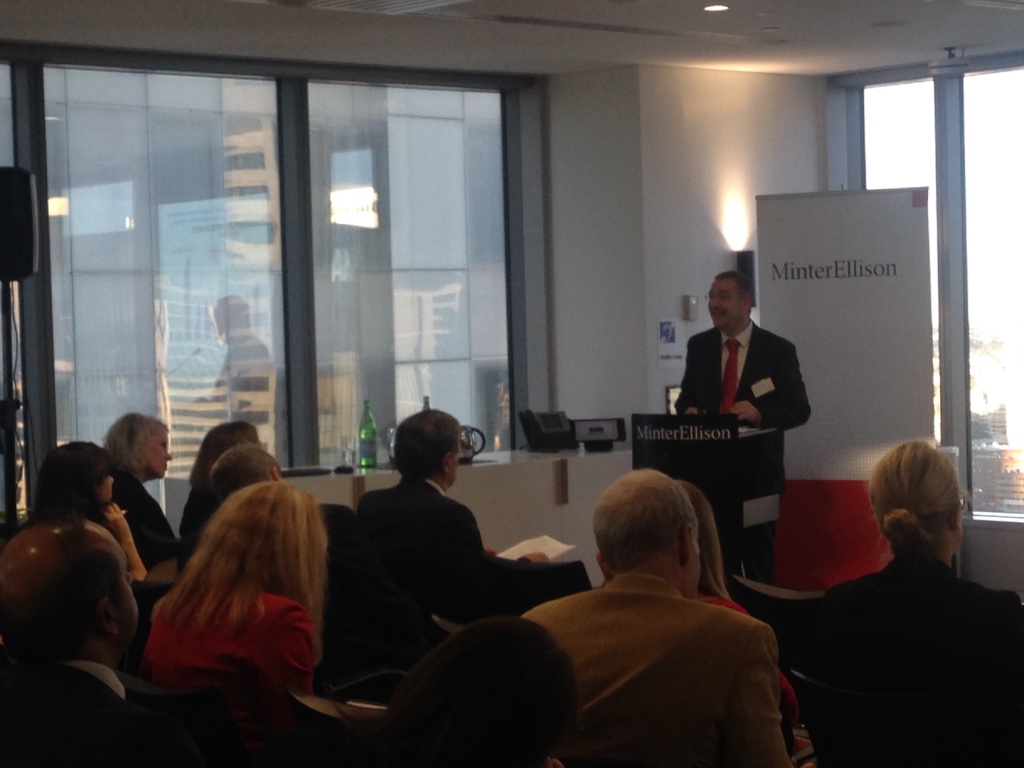 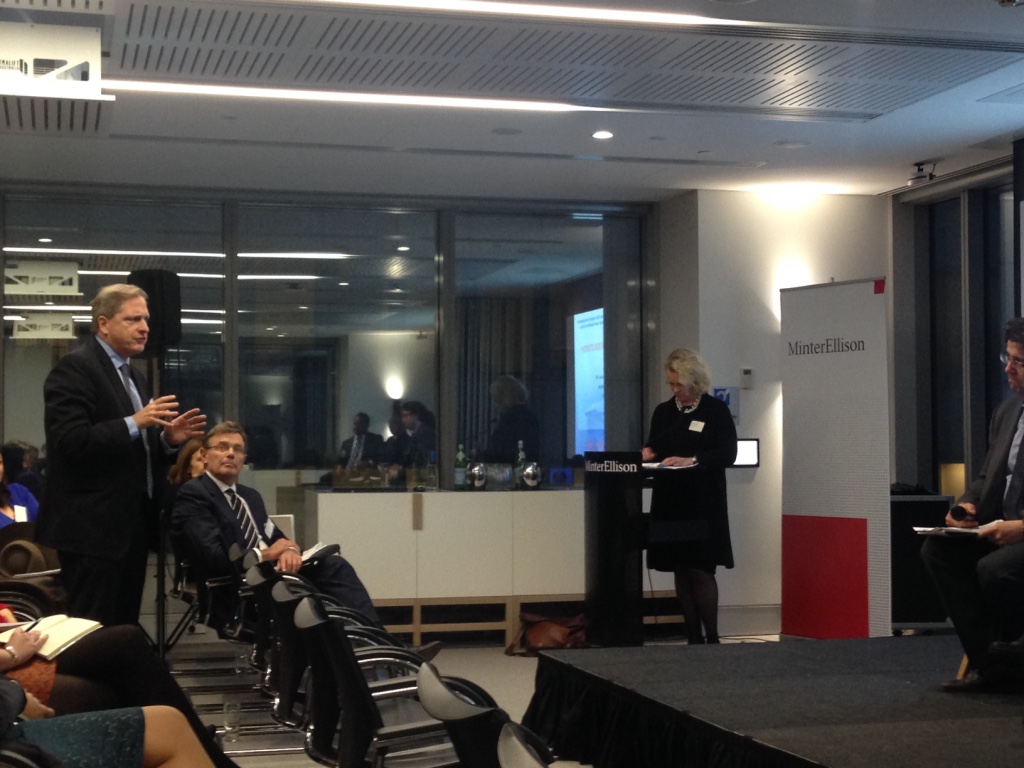 From left to right: Tim Harcourt, author of The Airport Economist asking a question to the panel; David Inglis, Partner with MinterEllison; and Laura Tingle, Political Editor for the Australian Financial Review 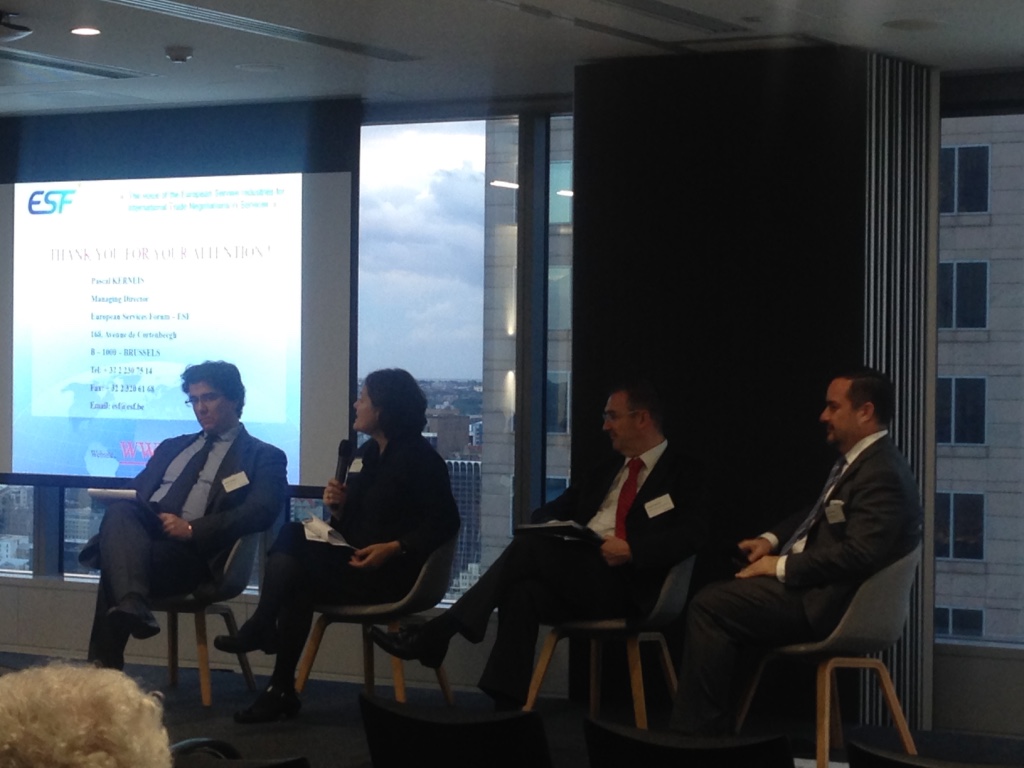 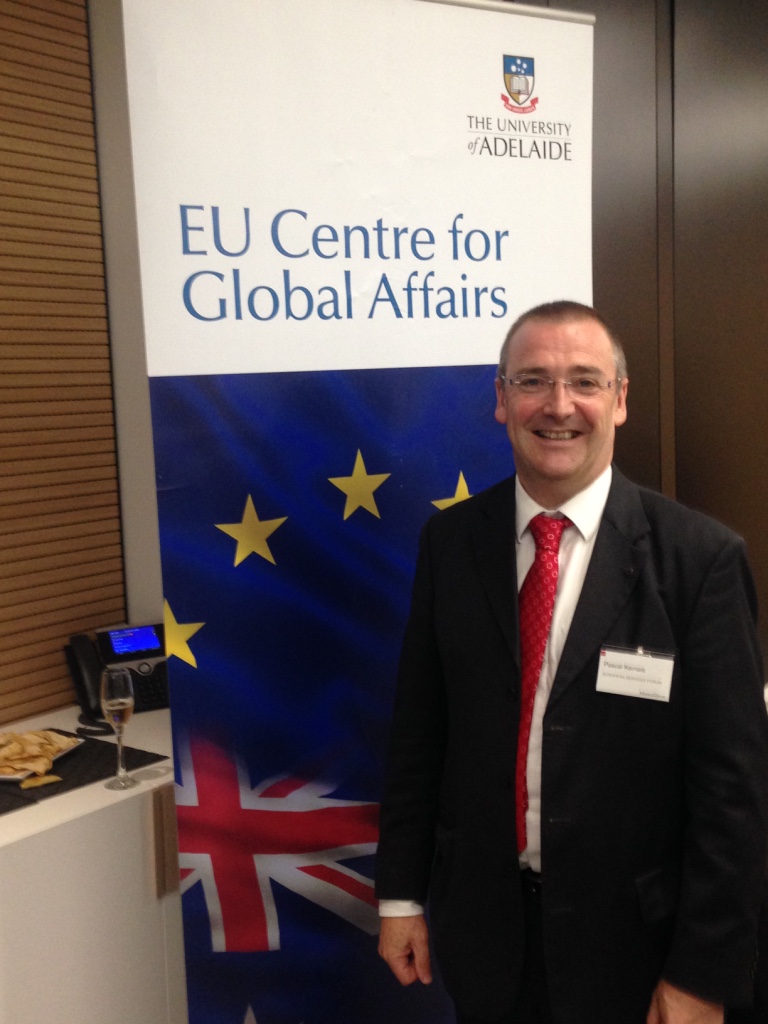 Pascal Kerneis, in front of the banner of the EU Centre for Global Affairs 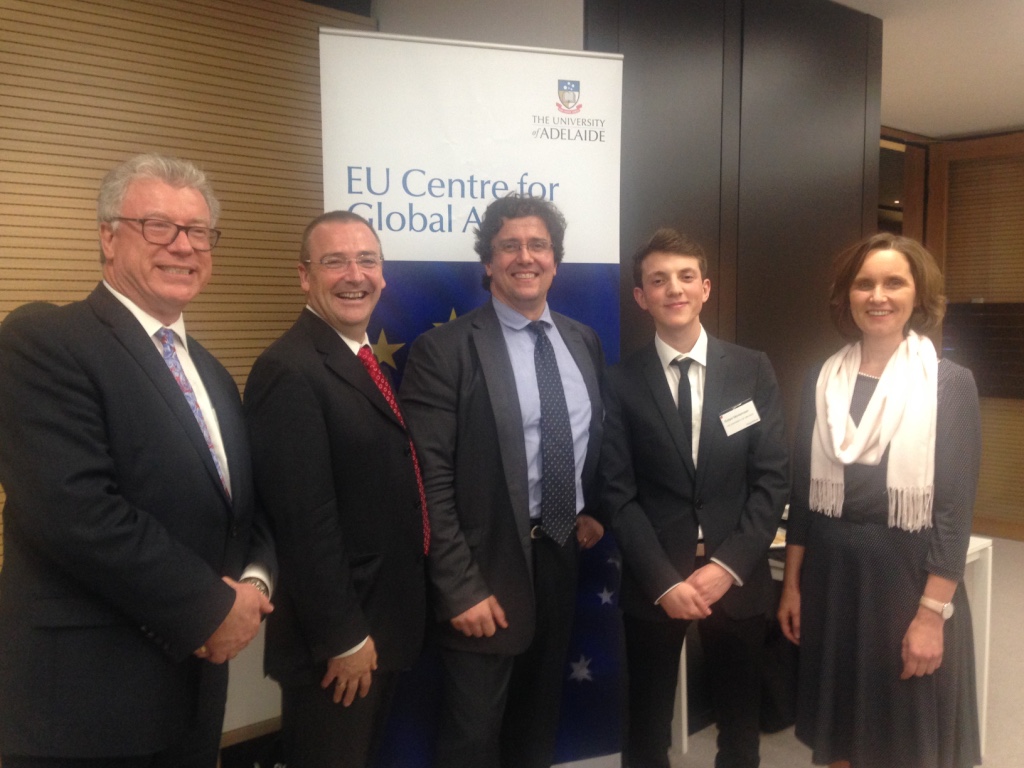 By Jane Drake-Brockman Director, EU Centre for Global Affairs, Institute for International Trade, The University of Adelaide Vice-President, Australian Services Roundtable The narrative on commercial relations between Australia and the EU has traditionally been about agriculture. That was largely yesterday’s story. In retelling it, we risk remaining blind to current Australian business realities and ignore […]

The forum provides an opportunity for Australian services firms to receive a high-level briefing on the proposed Australia/EU FTA from both the Australian Department of Foreign Affairs and Trade and the EU Delegation to Australia and New Zealand, with commentary and interaction from key business representatives in both Australia and Europe. The forum is moderated […]