Clash of the Old and the New World of Wine in China | A Case Study of Competition, Innovation and Prosecco

Posted on September 22, 2017 by EU Centre for Global Affairs

In its push for international acceptance of product names on its “claw back” list as Geographical Indications (GIs), the EU is on an offensive to make this happen via the Lisbon Agreement, the Geneva Act of the Lisbon Agreement, bilateral trade agreements and a strategy of awareness-raising campaigns. This article will use the latter methods in relation to Italian wine GIs in the People’s Republic of China (China) to illustrate the impact this will have on consumer information, innovation and competition.

In China, GIs can be accepted, registered and protected by three government institutions: General Administration of Quality Supervision, Inspection and Quarantine (AQSIQ), Trademark Office (TMO) of the State Administration for Industry and Commerce (SAIC), and the Ministry of Agriculture. However, the latter is exclusively for domestic GIs. In 2005, AQSIQ announced in Article 26 Provisions for the Protection of Products of Geographical Indication, that measures would be drafted which would make it possible for foreign GI owners to apply for and register their GIs in China.[1] But only in March 2016, AQSIQ actually issued these measures.[2]

The potential adverse effects on consumer information and innovation of the inclusion of a name as a GI can be illustrated by the ‘Prosecco’ case. Historically, ‘Prosecco’ is the name of a grape variety and a geographical location in the north-east of Italy on the border with Slovenia. To have a grape variety that coincides with the name of a geographical location did not sit well with the Italian and EU wish to use the name exclusively as a GI. Therefore, the EU Commission unilaterally renamed the grape variety in 2009 by decree, from ‘Prosecco’ to ‘Glera’.[3] However, according to Article 24(6) TRIPS: WTO members are under no obligation to protect as GI “products of the vine for which the relevant indication is identical with the customary name of a grape variety existing in the territory of that Member as of the date of entry into force of the WTO Agreement.” The WTO Agreement went into force on 1 January 1995, therefore the name change that was unilaterally initiated in 2009 came much too late. Nevertheless, in the EU, ‘Prosecco’ is only allowed to be used as a GI. In addition, the EU struck bilateral trade agreements with Canada, Chile, South Africa and Vietnam to make sure that the name ‘Prosecco’ cannot be used for the grape variety. Interestingly, the sparkling wine ‘Prosecco’ does not actually originate from Prosecco, which is a suburb of Trieste. Instead, it originates from the hectares of land between Conegliano and Valdobbiadene. Strictly speaking, one can argue that the use of the name ‘Prosecco’ as a GI is overbearing: GI’s function as a geographical source-indicator does not apply. Also, the prohibition of the name as a grape variety is making it cloudy instead of clear for consumers to learn about the ingredients of the wine they would like to drink, and is not conducive for competition. It also stifles innovation, since producers that are allowed to use the ‘Prosecco’ name according to the EU, are put in a straitjacket in regard to the rigid manufacturing process.

Despite the adverse effects on consumer information, product innovation and competition, the Italian government and the EU pursue the acceptance of ‘Prosecco’ as a GI. Encouraged by the successes of the Comité Champagne, which is protecting the GI ‘Champagne’, a Consortium was founded for the GI ‘Prosecco’.[4] Following in the footsteps of the Comité Champagne, which got the ‘Champagne Hillsides, Houses and Cellars’ recognized as UNESCO World Heritage Site in 2015, the Consortium applied for the inclusion of the ‘Prosecco Hills of Conegliano and Valdobbiadene’, in 2010.[5] The strategy here is to link the source of origin of the sparkling wine, namely the region between Conegliano and Valdobbiadene with the name ‘Prosecco’. This could facilitate the recognition of the name of the latter as a GI in China. However, even though the EU had unilaterally renamed the Prosecco grape into Glera grape in 2009, in the 2010 submission of for the World Heritage List, the Permanent Delegation of Italy to UNESCO still used the following description: “The Prosecco vine has been cultivated on these hills for over two hundred years,”[6] thereby shooting themselves in the foot over their claim that Prosecco is not a grape but a geographical area.

In 2013, China and the EU drafted a list of EU GIs that are to be included in a bilateral trade agreement on GIs. Then, the EU and China negotiated an agreement to recognize 100 GIs of each other. This “100 plus 100” bilateral agreement was signed on 2 June 2017. It includes the name Conegliano-Valdobbiadene-Prosecco. This suggests that the strategy is to combine a term that could be held generic (“Prosecco”) with the non-generic term “Conegliano-Valdobbiadene”: resulting in a Multi-Component Term. However, in accordance with the Napa Valley v Screw Kappa Napa case in China,[7] one can expect that a Chinese court comes to a similar conclusion in the case of Conegliano-Valdobbiadene-Prosecco. In 2016, the Beijing High People’s Court decided that although the name Screw Kappa Napa is not very similar to Napa Valley, “Napa” is the essential part of the name “Screw Kappa Napa”. This is what I call the Pars pro toto (the part becomes the whole) strategy and one can anticipate that a Chinese court will perceive “Prosecco” to be the essential part of the Multi-Component Term Conegliano-Valdobbiadene-Prosecco.

[1] Provisions for the Protection of Products of Geographical Indication, AQSIQ, 16 May 2005, available at: http://www.wipo.int/edocs/lexdocs/laws/en/cn/cn041en.pdf.

[2] Notice on the Protection of Foreign Geographical Indication Products, AQSIQ, 28 March 2016, available at: http://kjs.aqsiq.gov.cn/dlbzcpbhwz/zcfg/zxzcxx/201604/t20160413_464279.htm (Chinese). Article 7 states that the original applicant for the protection of a GI in the country of origin or region where the product is located can apply at AQSIQ.

[5] On 13 May 2017, the Prosecco Hills of Conegliano and Valdobbiadene are still candidate for the UNESCO World Heritage list.

[6] The Prosecco Hills of Conegliano and Valdobbiadene. (Le Colline del Prosecco di Conegliano e Valdobbiadene submission for the World Heritage List by the Permanent Delgation of Italy to UNESCO, 5 October 2010, available at: http://whc.unesco.org/?cid=326&l=en&id=5566&&&action=doc.

A conference about the EU GIs of the future in Treviso 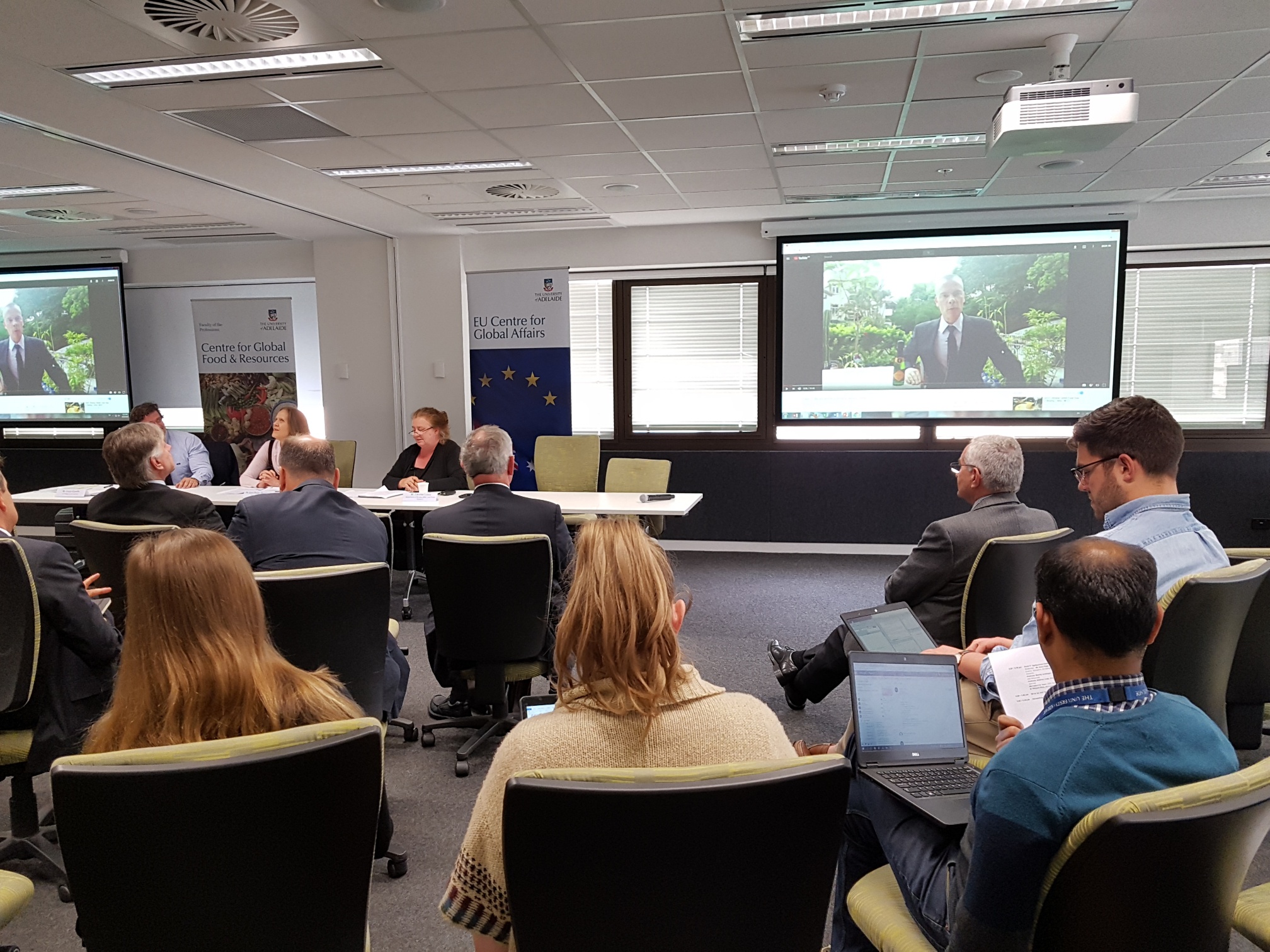 Case study video presentation by Dr Danny Friedmann at Public Seminar “The Australia/EU FTA: Agribusiness Opportunities and Challenges” offered by The University of Adelaide as part of the official programme for the EU Economic and Commercial Counsellors’ Joint Mission to the State

On 6 October  2017 the EU Centre for Global Affairs in collaboration with the Centre for Global Food and Resources held a public seminar “The Australia/EU FTA: Agribusiness Opportunities and Challenges” as part of the official programme for the EU Economic and Commercial Counsellors’ Joint Mission to the State. More details and the seminar programme are available HERE. The […]

In 2017, Economic and Commercial Counsellors from the European Union Member States will visit South Australia as part of their annual State and Territories Joint Mission. This mission will enable the Canberra-based EU Member State diplomats to learn about key sectors of the South Australian Economy, and the trade, investment and public procurement opportunities available […]

This entry was posted in News and tagged Geographical Indications, Trade, Trade and Investment, Trademark, Wine and Trade. Bookmark the permalink.