The EU Centre for Global Affairs Study Tour visit to the Australian Embassy in Paris was the focus of the morning’s activities on 27 September 2017. Embassies in the 21st century can, at face value, struggle for relevance. If two nations wish to talk, their leaders can quite easily pick up the phone or start a video call. The age where ambassadors and embassies acted as an intermediary are largely over. The advent of modern communications technology has changed the duties that our diplomats undertake. The Australian Embassy in Paris is no different.

This does not mean, however, that these institutions are redundant. In fact, the Study Tour time at the Embassy speaking with Rowan Ainsworth, Policy Counsellor, and Bridget Crane, Advisor to Australia’s Delegation to the OECD, revealed the complex duties of modern diplomatic staff.

Most Australians would be aware of the recent French election at which President Macron was elected. It’s easy to be distracted by the rhetoric and commentary in the wake of these elections, but this was simply not an option for the staff at Australia’s embassy in Paris. Rowan Ainsworth walked the student group through the intricacies of maintaining strong government-to-government links in the wake of administrative transition, such as in the aftermath of elections. She talked in depth about the steps that the Embassy took to meet with new Macron Administration officials such that Australia’s deep trade and security ties would not be interrupted. Students with a background in legal and political studies found this conversation to be fascinating, given that it’s rare to hear about these inter-governmental efforts from the very source.

Bridget Crane also spoke to the student group concerning her role as part of Australia’s representation to the OECD. Australia is an active participant at the OECD, and given Australia’s record period of uninterrupted growth, it is particularly important that Australia utilise the policy advice that such organisations offer in order to see this continue. The student group has already written about the role of the OECD in a previous blog, where Ms Julia Nielson described the importance of the OECD ‘holding a mirror up’ in order to help find better policy solutions for member states.

Beyond these formal diplomatic roles, it was particularly interesting to see the ‘soft power’ diplomacy that the Embassy undertakes in order to promote Australia’s interests in a major EU member state capital. The ground floor of the Embassy plays host to a large and open gallery space where leading Australian artists are exhibited on a rotational basis. Even the physical location of the Embassy offers Australia a unique opportunity to promote itself. Located just one street back from the Eiffel Tower, the side of the Embassy building is adorned with a massive Australian poster of a koala. 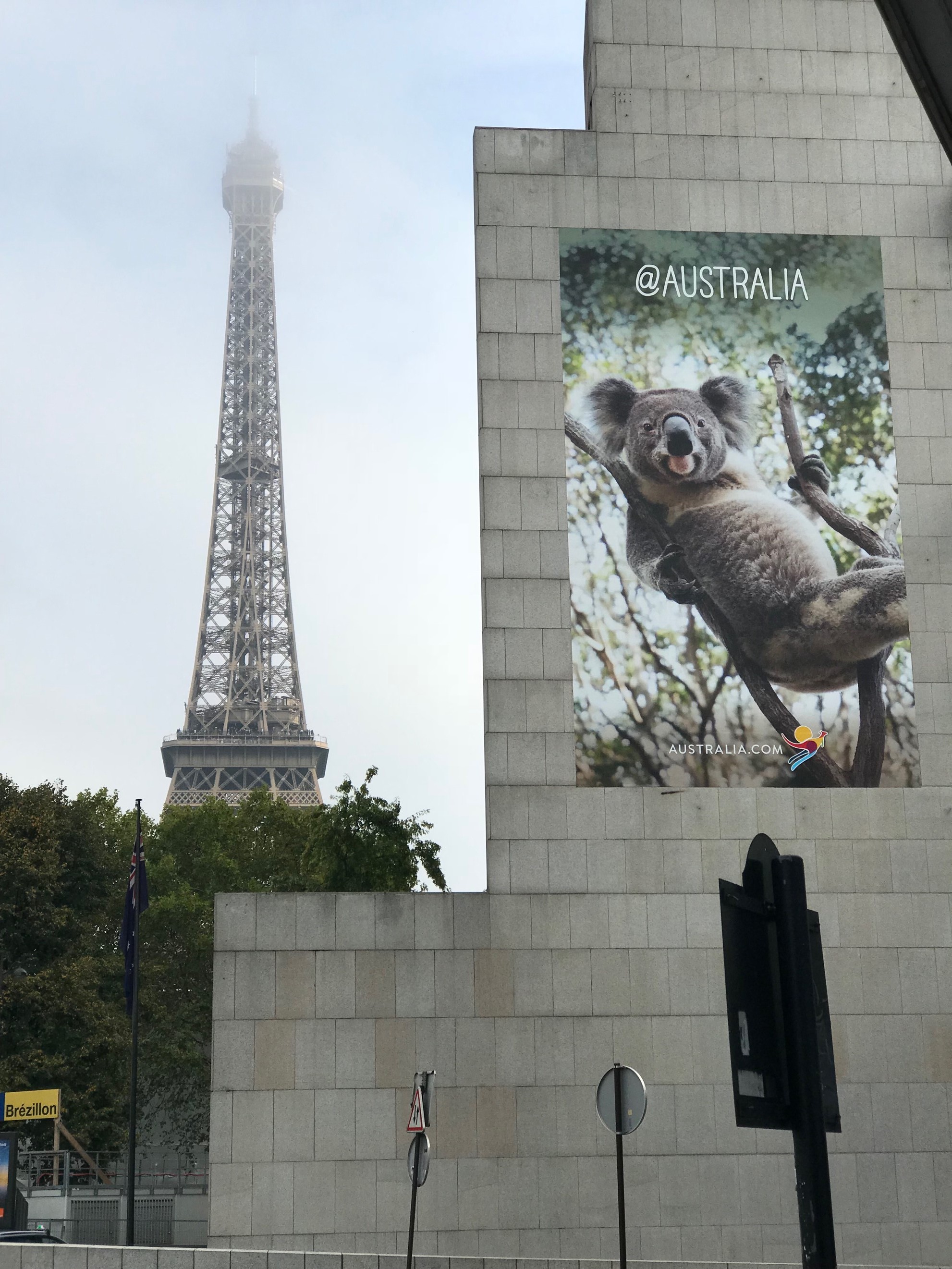 After some essential sightseeing in the last few free hours in Paris, the student group was fortunate to return to the Australian Embassy in the late afternoon for a meeting with Ms Linda Marchesan, Assistant Trade Commissioner for the Australian Trade and Investment Commission, also known as Austrade, in Paris. Ms Marchesan engaged the group with her presentation of what Austrade is and what the organisation does for Australian businesses and citizens, with a specific focus on the bilateral France/Australia relationship.

Ms Marchesan joined Austrade thirteen years ago and every few years she moves into a different industry. After previously working in Adelaide with a speciality in the wine sector, she is now focused on attracting productive foreign direct investment in technology, with a focus on artificial intelligence and frontier hardware, such as drones.

Austrade, in Ms Marchesan’s words, does ‘behind the scenes crunching of data’ to advance Australia’s international trade (including education services) performance, to input to trade policy advice and of course to contribute to Australia’s economic prosperity. Most of Austrade’s services are provided free of charge and they also offer ‘Export Market Development Grants’, with the granting of over AUD$184 million in the 2015-16 financial year. They are a sister agency to the Department of Foreign Affairs and Trade (DFAT), but more focused specifically on Australian businesses. When asked why trade, investment and education promotion matter, she answered quite simply ‘It is IMPORTANT!’. The education sector was a big topic of conversation with tertiary education being Australia’s third largest export, generating AUD$20 billion a year. It was interesting to learn that Australia’s education exports were also the third largest in the world.

What was different about this talk was that Ms Marchesan focused on Australia’s connection with France specifically, rather than the entire EU. This gave the student group perspective on the Australia-France bilateral relationship, with France being Australia’s seventeenth largest foreign direct investor in 2017. There are currently 120 Australian companies in France, such as Amcor, and Ms Marchesan ensured the group that the Austrade office in Paris is strongly focused on keeping this growing, with their target companies being those that are wishing to expand. She noted that in France, South Australia was the most active all of the Australian states, with many companies thinking ‘SA’ rather than ‘Australia’. This led to a discussion of the future submarines contract.

Ms Marchesan observed there have been three major waves of French investment into Australia and we are currently entering into a fourth wave. 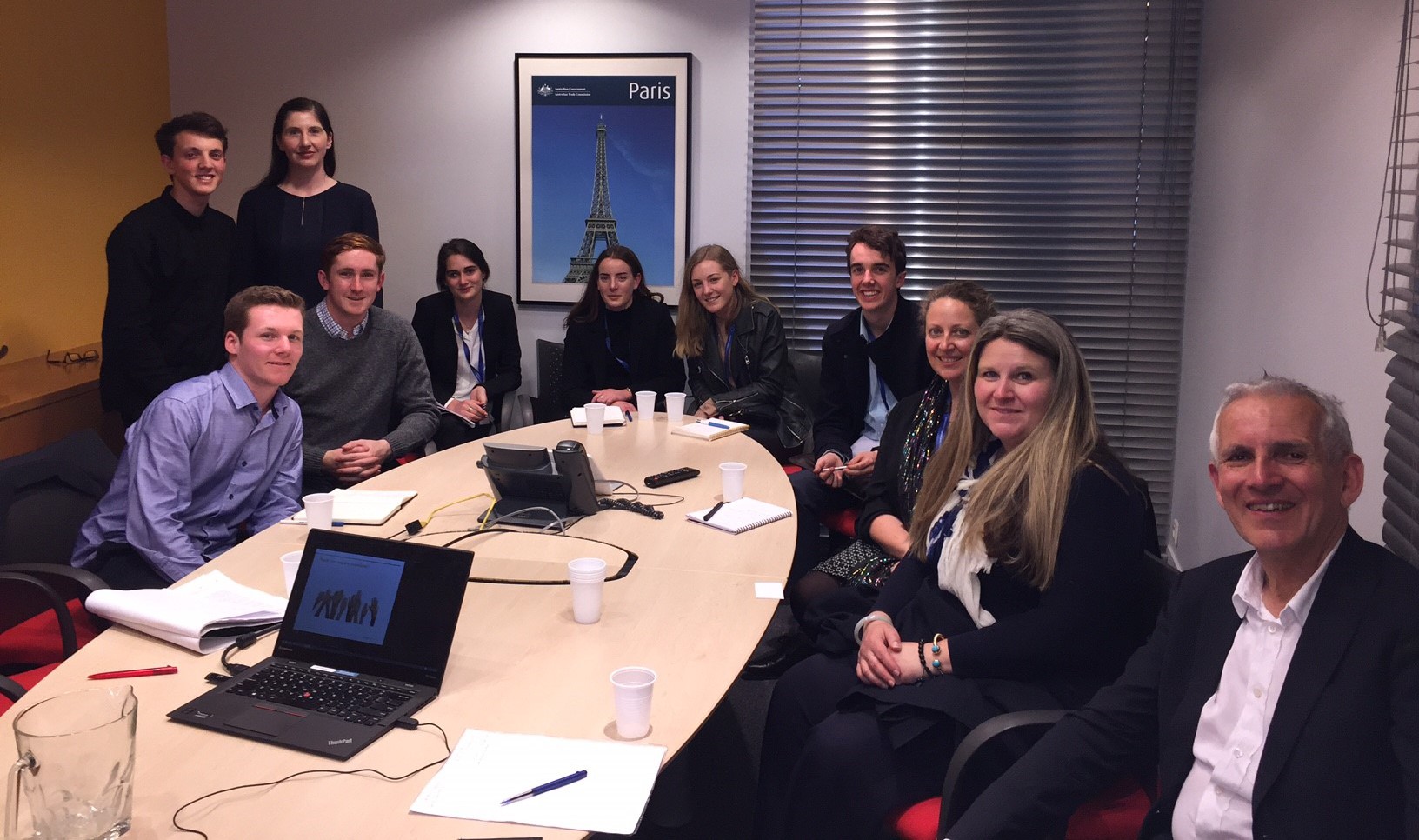