Posted on November 6, 2017 by Simon Zyrianov 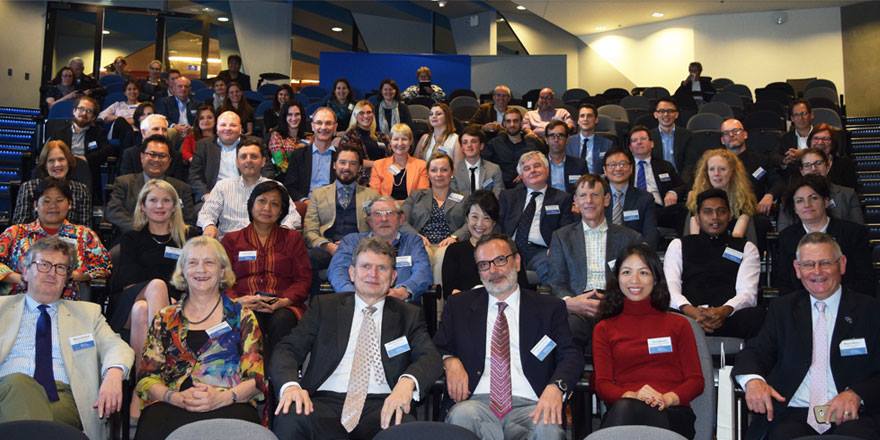 The conference was focused on addressing questions about the future of the European Union and included a series of thematic plenary panels and sessions where a number of academic papers were presented. The Conference also provided multiple opportunities to share perspectives from European Ambassadors, the European Commission, the EU Delegation to Australia and business and policy representatives at the special sessions and panels. The new Ambassador and Head of the EU Delegation to Australia His Excellency Dr Michael Pulch gave the introductory address, concluding that “The best way to predict the future is to shape it”. 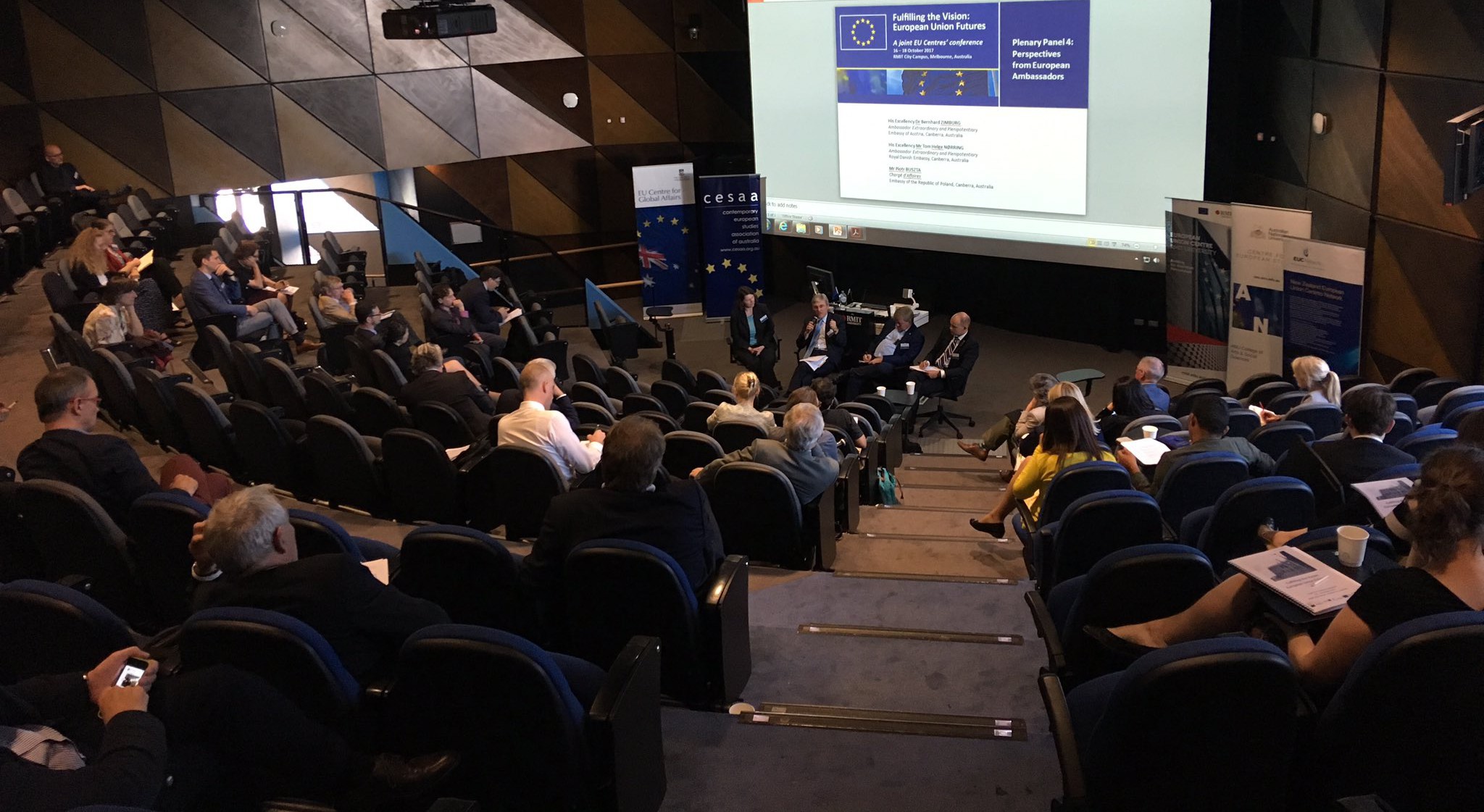 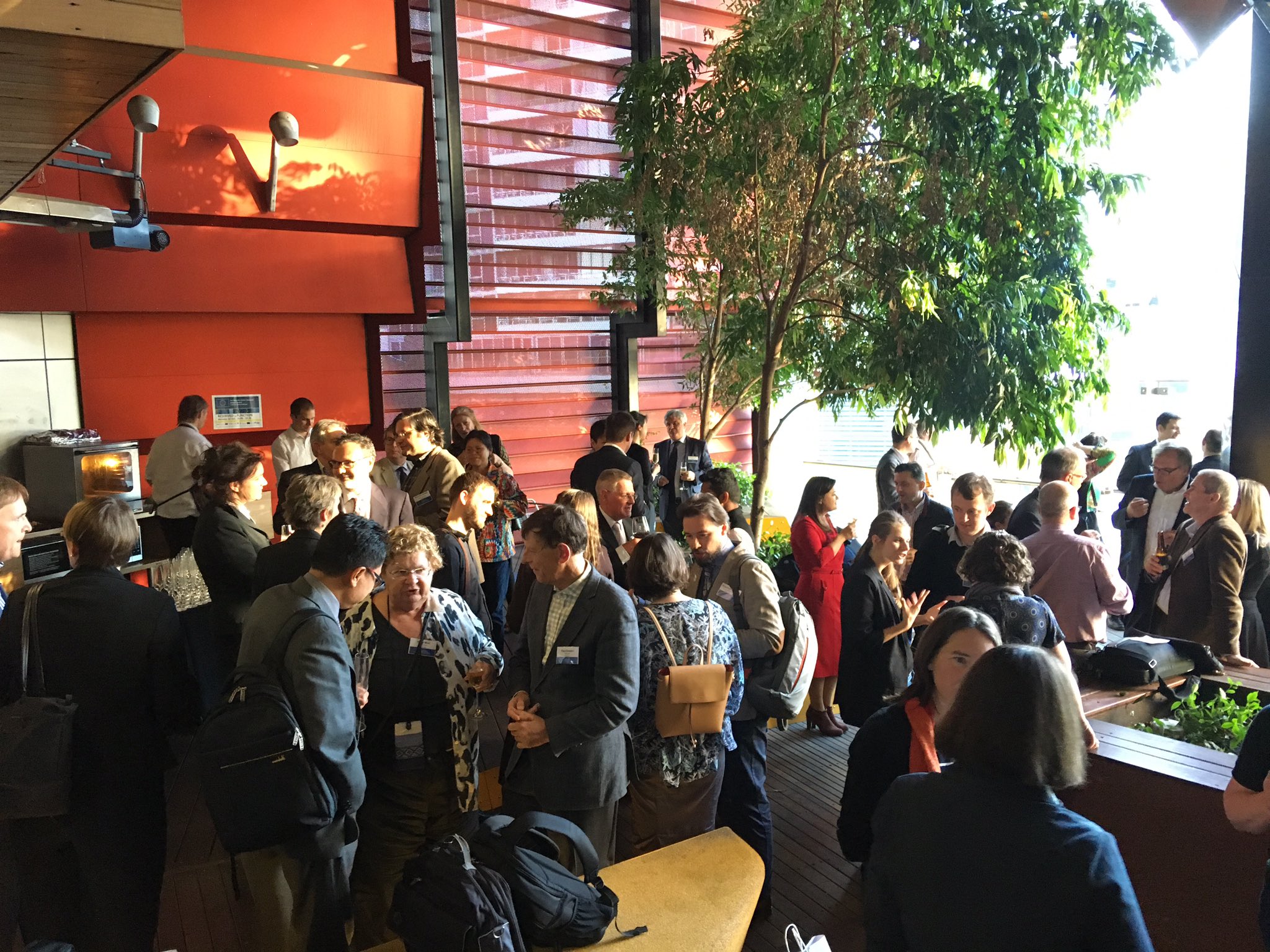 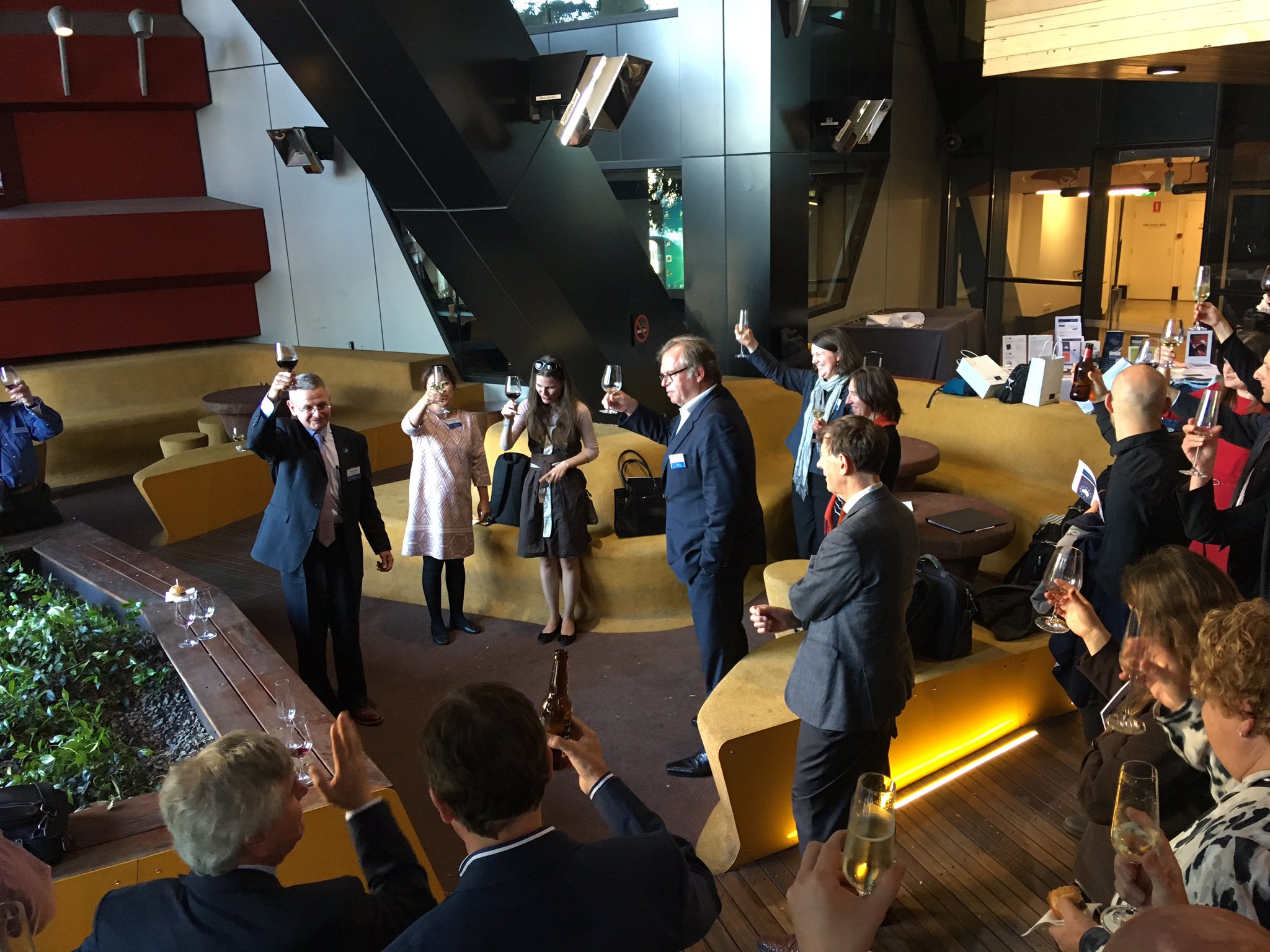 A toast to colleagues who have published books in 2017; The EU Centre for Global Affairs at the University of Adelaide supported the publication of 6 books during 2017

On Tuesday 17 October, the EU Centre for Global Affairs released some of the findings from its forthcoming research volume “Potential Benefits of an Australia-EU Free Trade Agreement: Key Issues and Options”, both in the plenary panel on “Harnessing Globalisation to build a better world for the benefit of all” and in the following session on “Towards an Australia/EU FTA”. 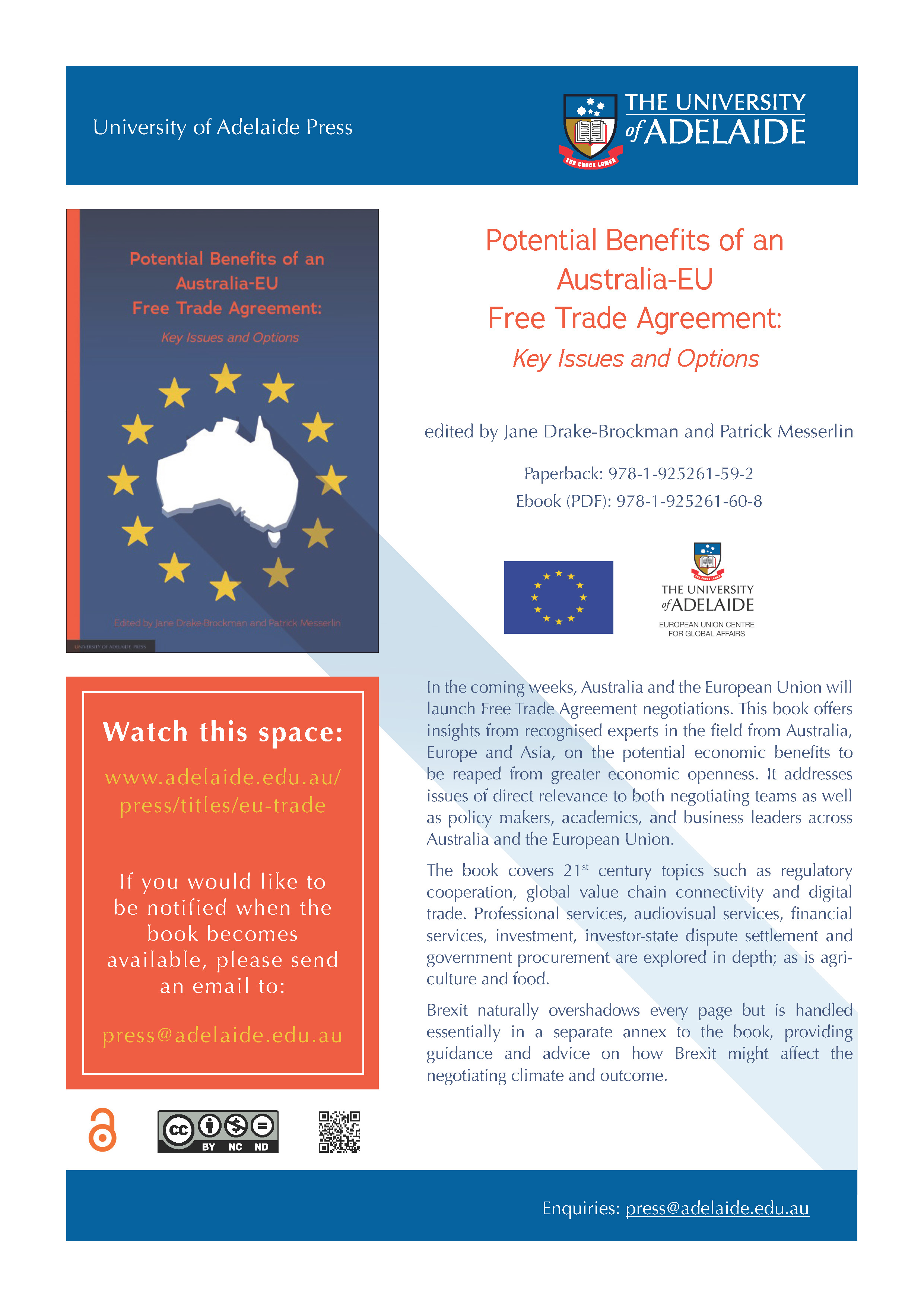 Mr Ivano Casella, Counsellor and Head of the Economic and Trade Section of the EU Delegation to Australia, actively participated in both of these discussions – delivering a presentation in the plenary panel and chairing the following special session, providing abundant insights into the EU position and vision. Contributing authors’ Conference presentations can be downloaded below: 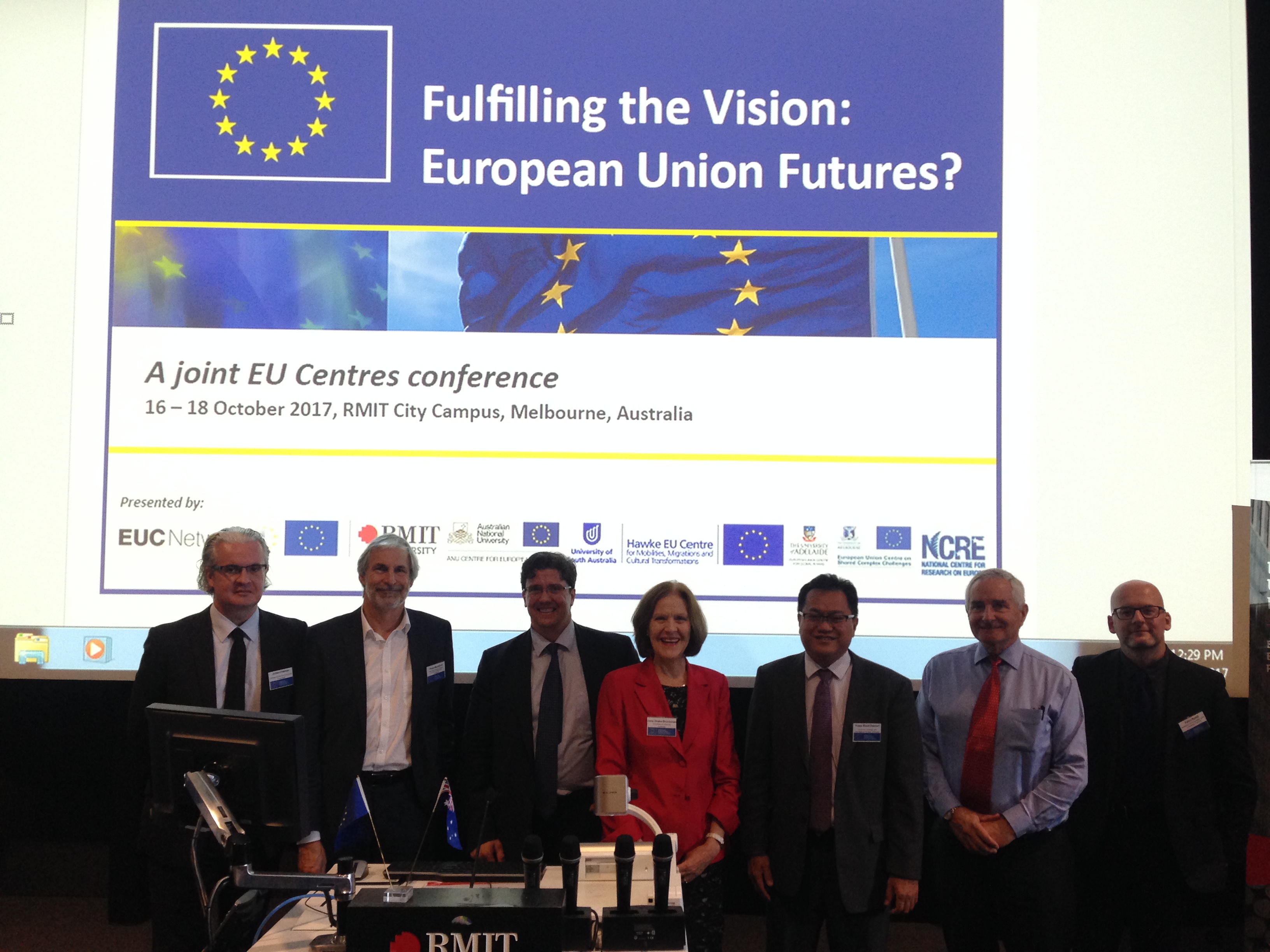 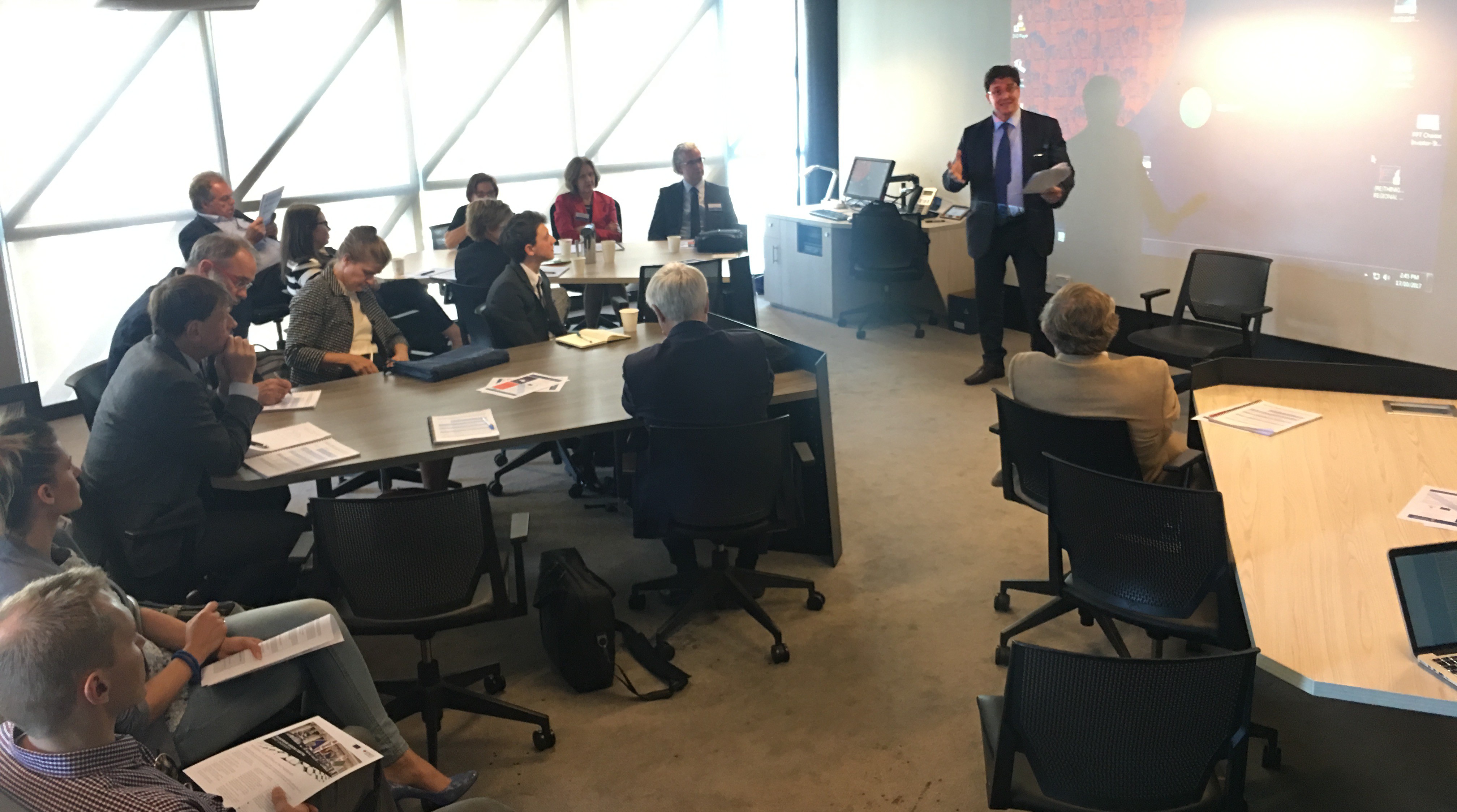 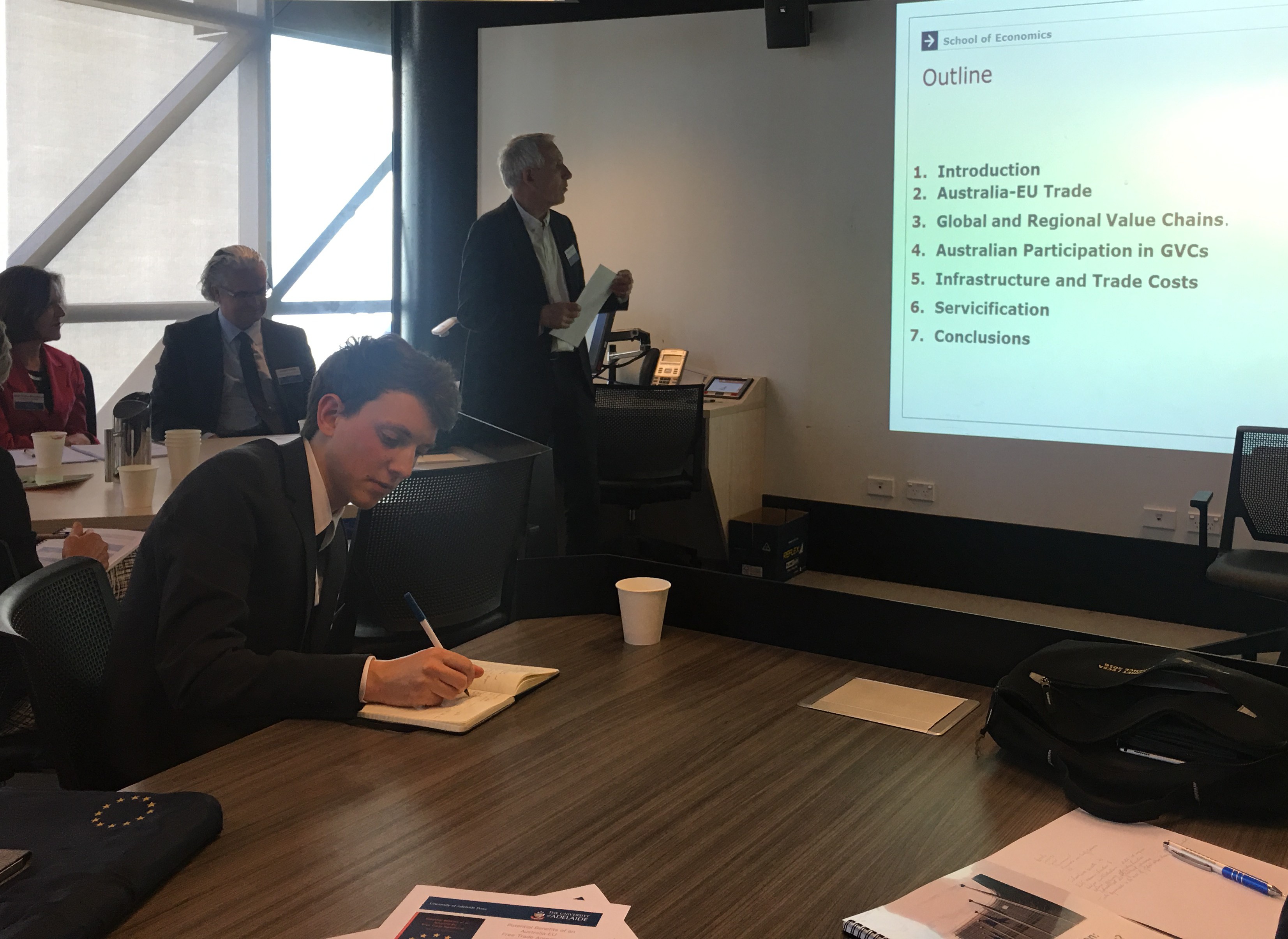 Professor Richard Pomfret, The University of Adelaide presenting on Global Value Chains in session on “Towards an Australia/EU FTA” 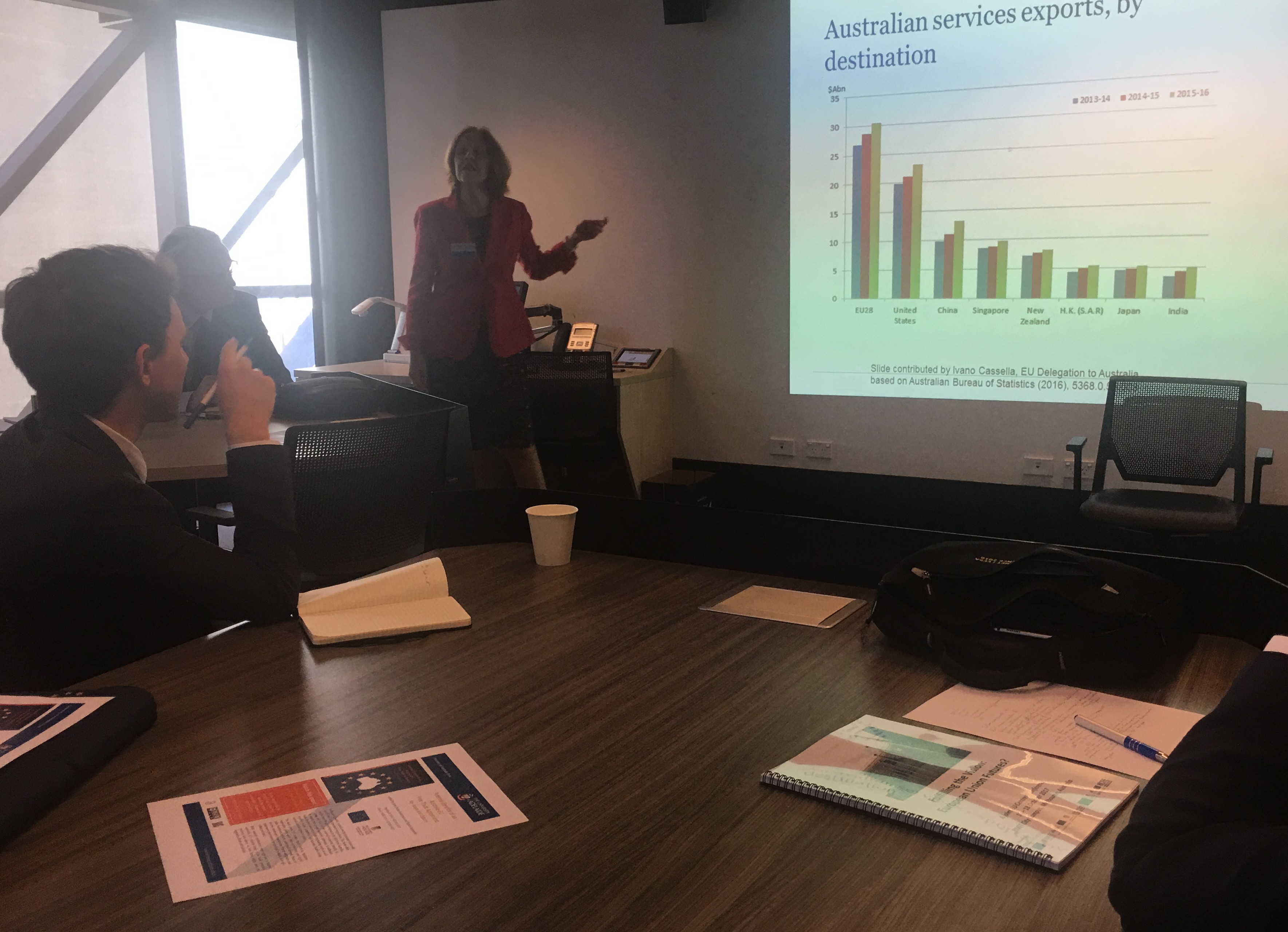 Jane Drake-Brockman, The University of Adelaide emphasising the importance of services in EU-Australia economic relationships 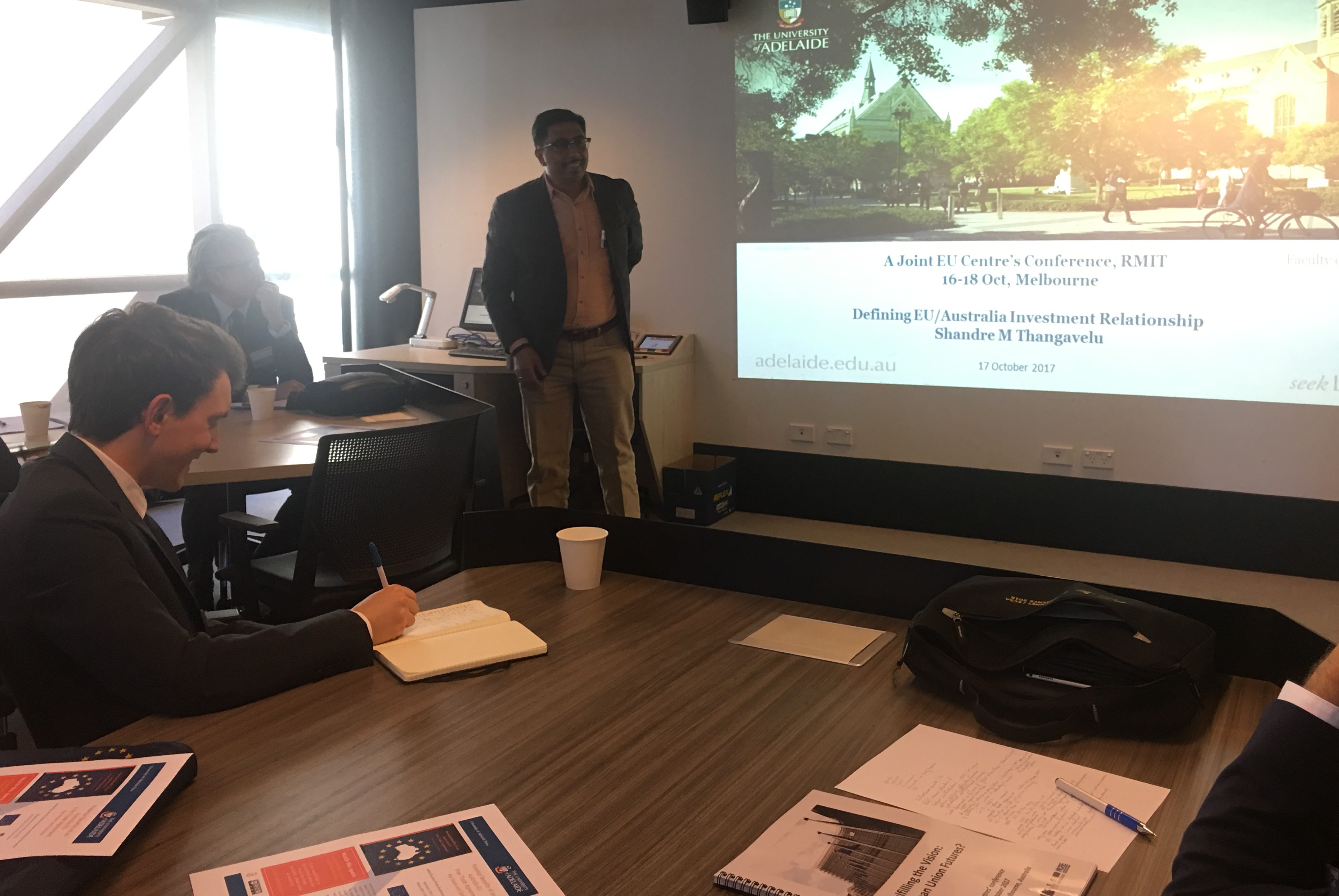 Associate Professor Shandre Thangavelu, The University of Adelaide presenting on investment in session on “Towards an Australia/EU FTA” 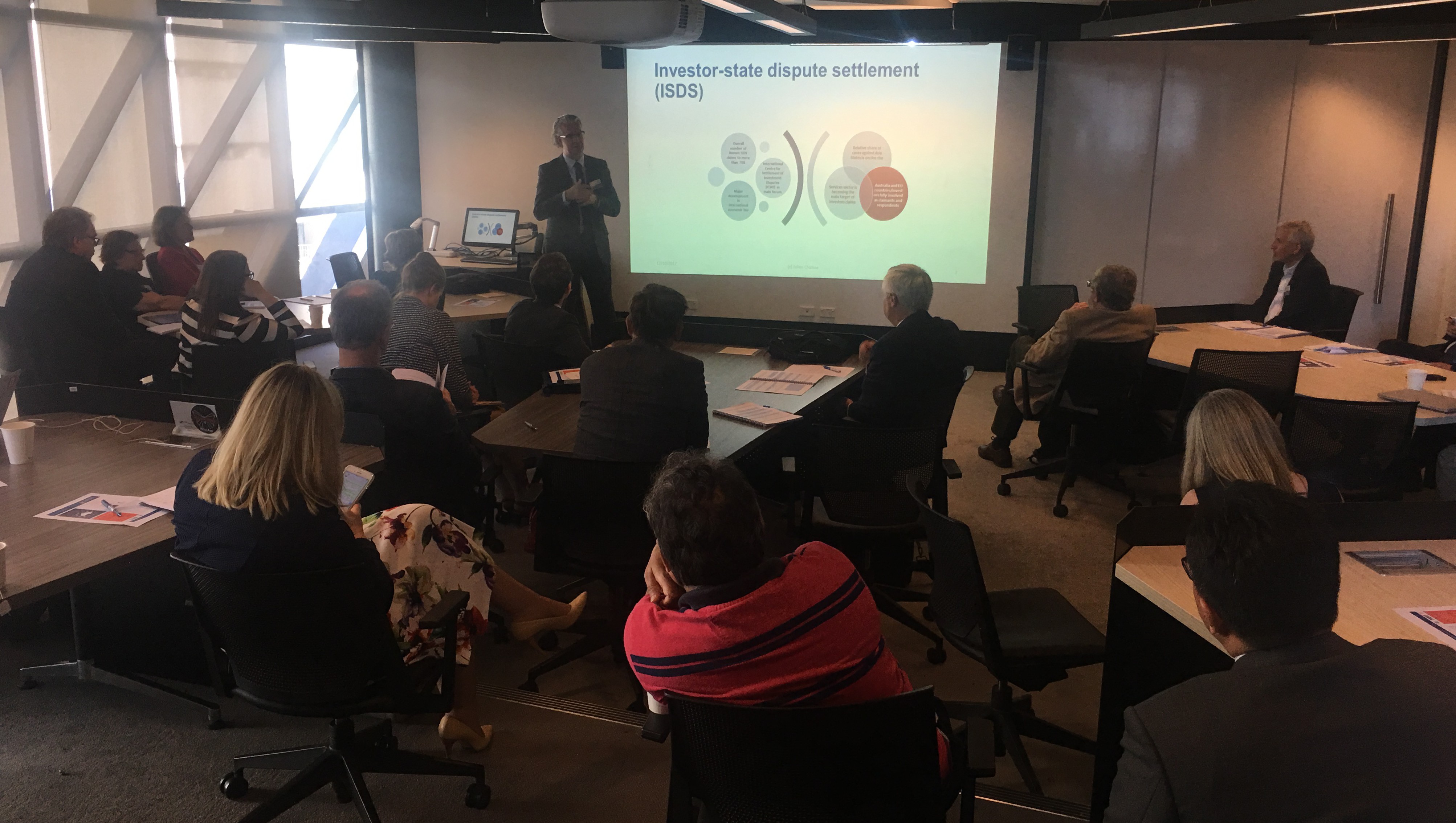 Professor Kym Anderson also released some of the findings from his book “Wine Globalization: A New Comparative History”, supported by an EU Centre for Global Affairs Research Grant Programme, and delivered a presentation on “The UK, EU27 and Global Wine Markets by 2025: Implications of Brexit” in session on “Emerging Trade Issues” on Day 2. 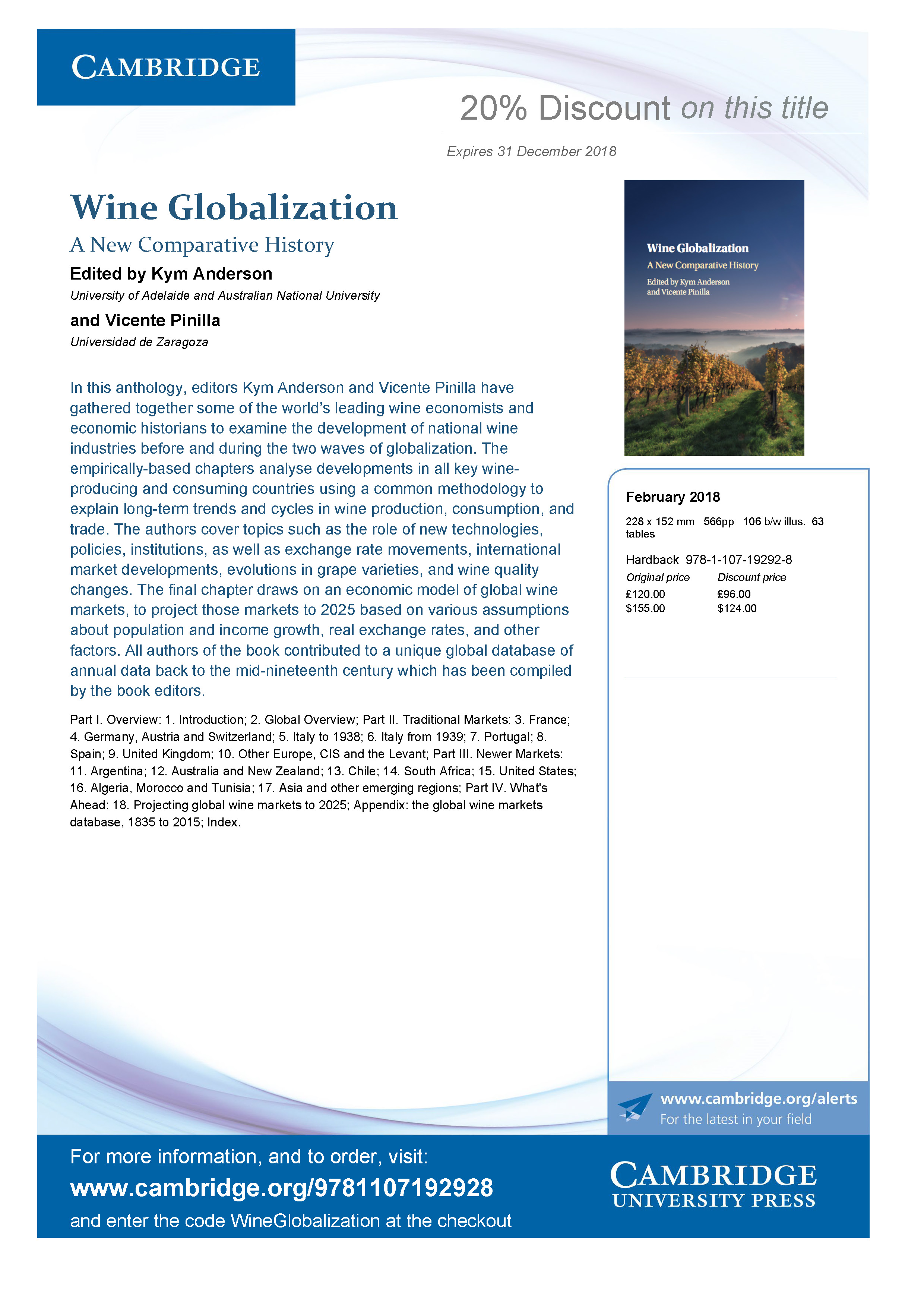 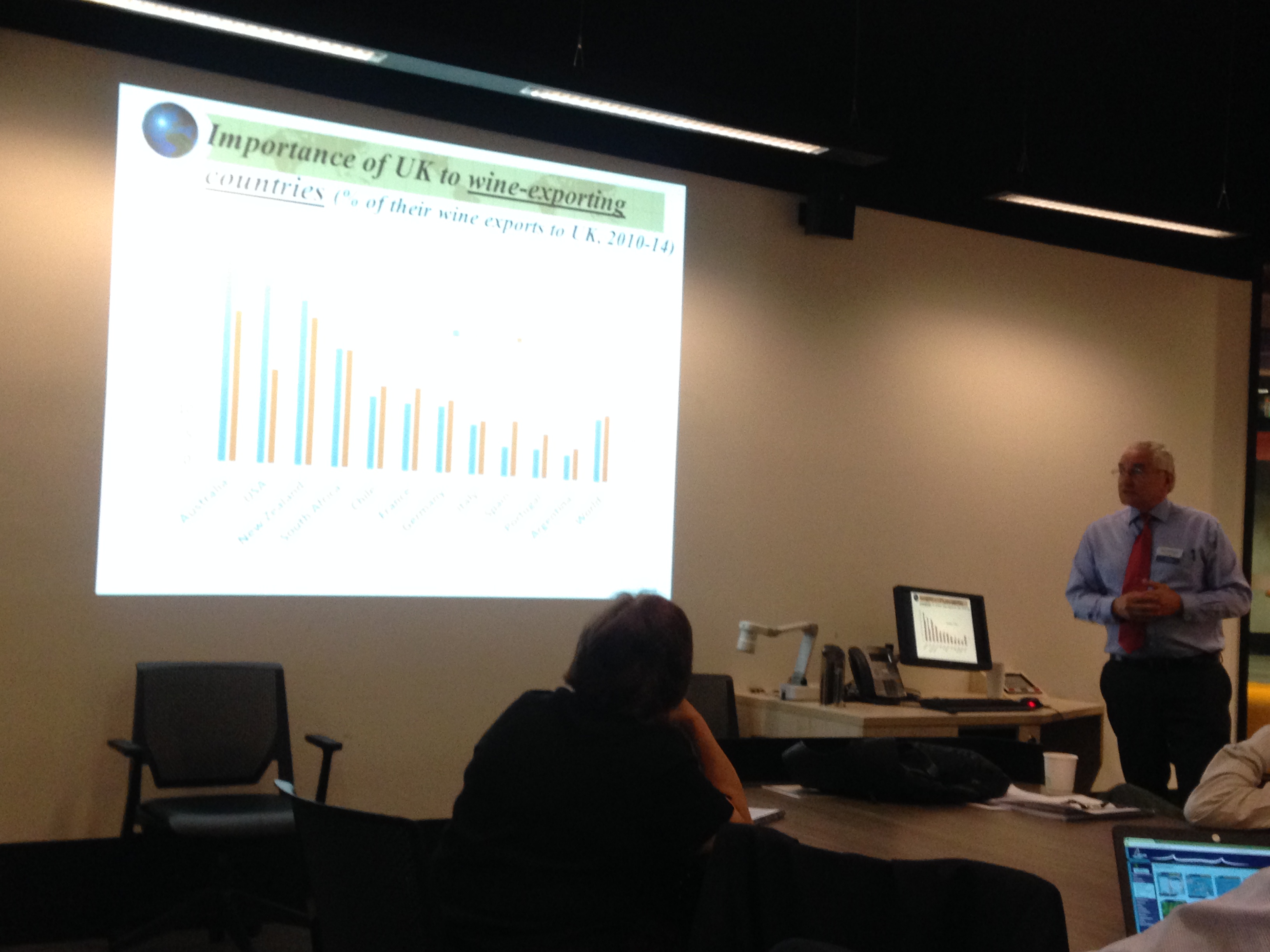 Jane Drake-Brockman also joined colleagues from The Australian National Universit in a session on “Barriers to trade in services – new measures and implications for the Single Market” presenting on “Regional Integration in Services: Using the STRI to measure progress with the EU Services Directive and the EU Single Digital Market”. Professor Julien Chaisse, Professor Richard Pomfret and Dr Yose Rizal Damuri also chaired some of the plenary panels and sessions. 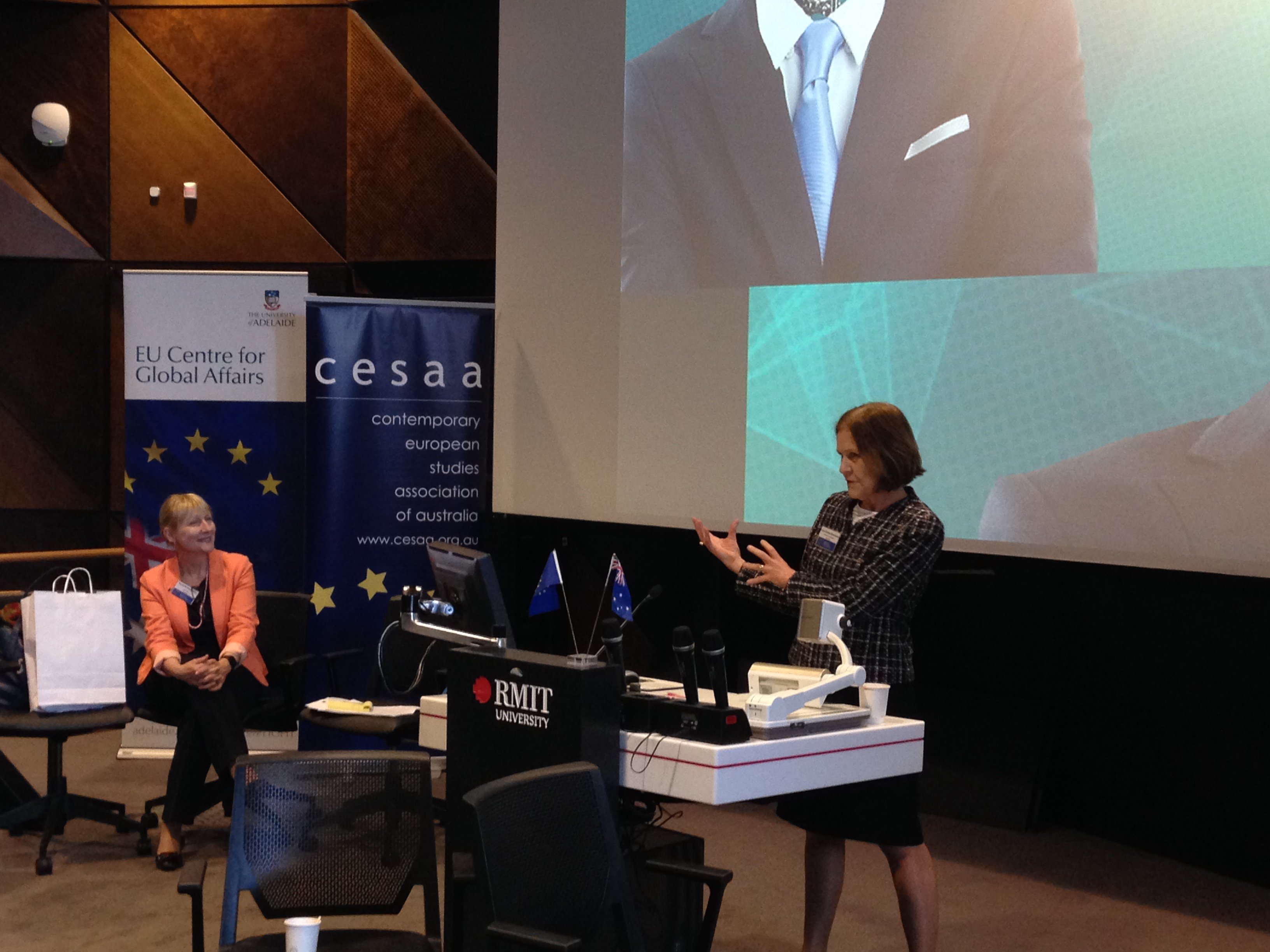 The EU Centre for Global Affairs would like to thank everyone involved – all speakers, participants and organisers! It was a fantastic array of presentations, discussions and ideas.

This post starts a series of blogs reporting on the final research outcomes of the EU Centre for Global Affairs Annual Grant Program. The research funds were allocated for research activities which have a bearing on the EU-Australia relationship on the basis of a competitive application process throughout three rounds in 2015, 2016 and 2017 […]

The Future of the EU Summit

With the two-day conference entitled “Fulfilling the Vision: European Union Futures?” coming to a close on the morning of Wednesday 18th October, the event shifted from the Royal Melbourne Institute of Technology University campus to the University of South Australia campus for its final event, entitled “The Future of the EU Summit” organised by the Hawke […]

Joint EU Centres Conference in Melbourne The lingering economic malaise, the potential exit of the United Kingdom and the apparent divisions between western and eastern European Member States appear to undermine the capacity of the EU to offer credible options for addressing the challenges that European citizens experience. The tensions, at times open conflict in […]