The Food Values Research Group is excited to host UK authors and cheese scholars Bronwen and Francis Percival for a special seminar on Monday, 19 March 2018. All welcome!

Reinventing the Wheel: Starter Cultures and the Making of Modern Cheese 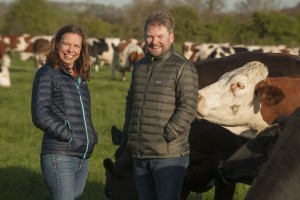 Starter cultures—purified strains of lactic acid bacteria—are the single essential tool of modern cheesemaking, used to ferment milk by every type of cheese producer, from giant factories to the most boutique farmhouse. But despite their ubiquity, starter cultures have existed for less than 140 years: a minute portion of the history of cheesemaking. And when they were introduced, they were reviled by most as a needless complication, creating controversy in the cheese world. Bronwen and Francis Percival will discuss how cultures changed the cheese and how those cheeses changed the culture, and they’ll examine how the secret history of starter cultures challenges claims of traditional practice and authenticity in the cheese world today.

Bronwen Percival is the cheese buyer for Neal’s Yard Dairy in London. In addition to working with cheesemakers and the company’s maturation team to select and optimise the quality of the cheese they sell, she works to mobilise collaboration between cheesemakers and the scientific community. In 2012, she instigated a biennial conference on the Science of Artisan Cheese. In early 2014, she spent two months in the Dutton Lab at Harvard University studying the role of marine-associated Proteobacteria on cheese rinds. Along with Dr. Benjamin Wolfe, she co-founded the website MicrobialFoods.org, a scientific resource for producers, purveyors, and enthusiasts of artisan microbial foods, and more recently she served on the editorial board of the Oxford Companion to Cheese.

Francis Percival writes on food and wine for The World of Fine Wine. His work won Louis Roederer Best International Wine Columnist in 2013 and Pio Cesare Food & Wine Writer of the Year in 2015. Francis is also a judge in The World of Fine Wine World’s Best Wine List Awards. Apart from The World of Fine Wine, his work has appeared in Decanter and the Financial Times in the UK and Culture, Saveur, and Gourmet in the US. Besides writing, Francis also teaches classes for Neal’s Yard Dairy.

Bronwen and Francis are co-authors of Reinventing the Wheel: Milk, Microbes, and the Fight for Real Cheese