Development issues in the Asian Century 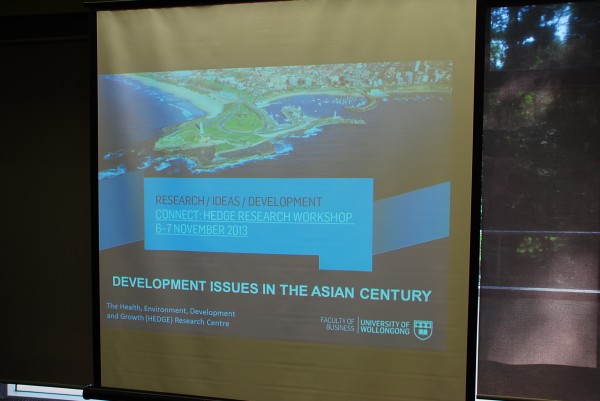 The Global Food Studies staff, Dr Xiaobo He, attended a two-day workshop at the HEDGE (Health, Environment, Development & Growth Economics) Research Centre, University of Wollongong (UOW).  More than ten scholars, including the keynote speaker Dr Guanghua Wan, the principal economist from the Asia Development Bank (ADB), presented their research papers on the theme of emerging issues in Asia and the Pacific.

Dr Wan delivered an informative speech entitled “MDGs (Millennium Development Goals) and the post-2015 development agenda: An Asian perspective”.  First, he emphasised the importance of the Asian economies, as in 2050 the total GDP of Asian will achieve 52.3% of the world total GDP—it is no doubt the Asian Century. With respect to the MDGs, Asian countries definitely did a great job in poverty alleviation, however, this was largely driven by the poverty reduction in China and India.

For other aspects of MDGs, for instance, health and education, most Asian developing countries still had room to improve. Dr Wan also pointed out that there might be a new approach called ‘ZEN’ for Asia’s future development.  The ‘ZEN’ approach constitutes ‘Z’ that is zero extreme poverty; ‘E’ that is epsilon goals (e.g. voluntary and complementary development goals for each country); and ‘N’ that is N goals related to environment issues, climate change and sustainable development.

Xiaobo presented his solo-authored paper entitled “The Great Famine and long-term health: New evidence from Chinese survivors”.  He introduced the background of the Great Famine during 1959-161 in China and listed three key research challenges in this literature: first, measurement errors in death rates during the famine; second, omitted variables that are unobservable but have impacts on death rates, and last but not least positive selection bias which may confound the negative famine effects. His work largely focuses on how to estimate the true long-term famine effects on survivors’ current health consequences.

The workshop was a great success which provided a forum for both academic views and policy concerns. The host, HEDGE, is willing to hold this workshop regularly in the future.

This entry was posted in Event, Research, Trip. Bookmark the permalink.