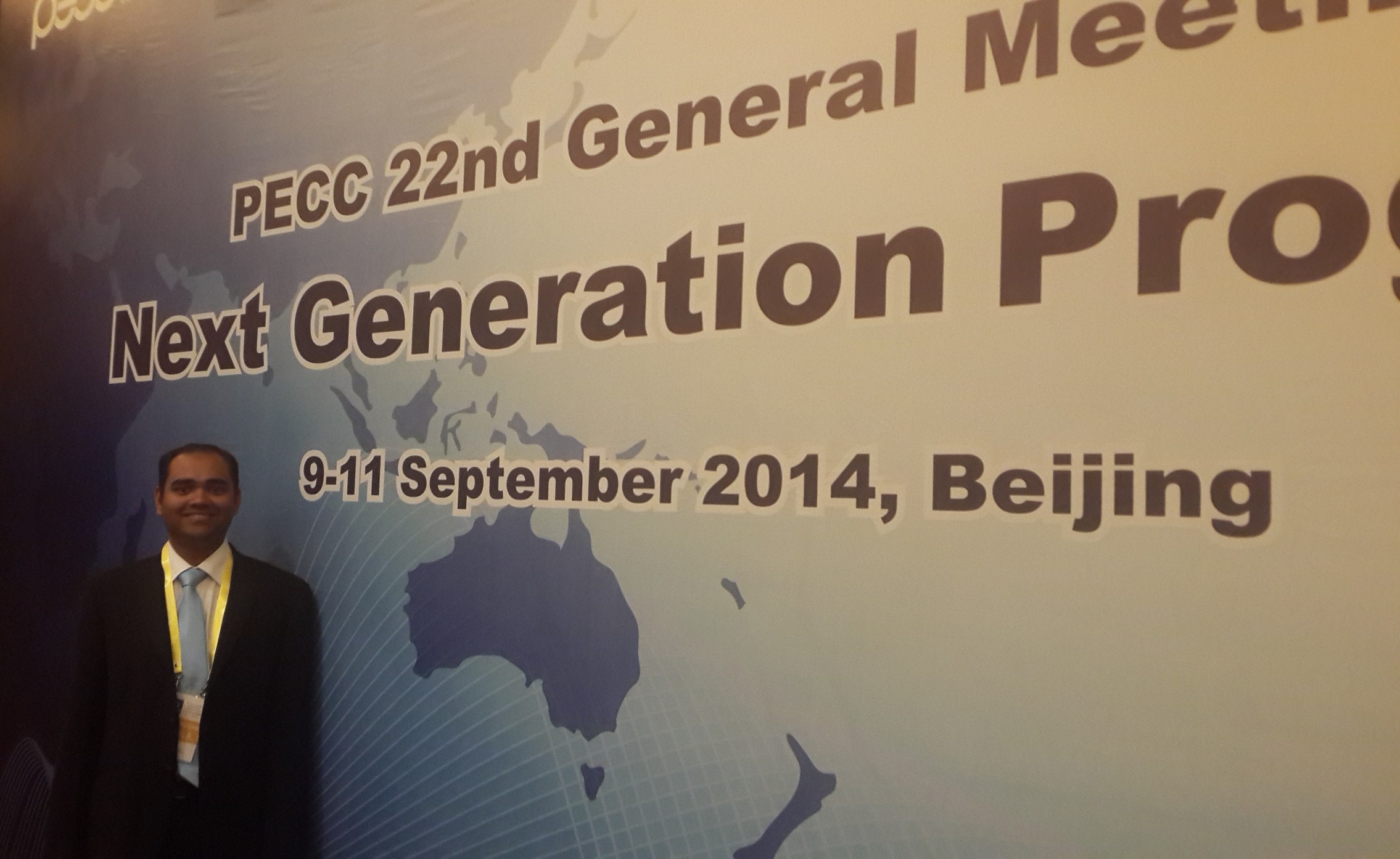 According to the PECC’s website, “this year marks the 25th anniversary of APEC and the 20th anniversary of the Bogor Goals”. The PECC attempts to continue to provide “proactive policy advice and support” for the APEC policy making process.

This year’s APEC theme is “Shaping the future through Asia-Pacific partnership” under which China has identified three priorities: 1) Advancing regional economic integration; 2) Promoting innovative development, economic reform, and growth; and 3) Strengthening comprehensive connectivity and infrastructure development. In support of these APEC priorities set out by China, PECC organized its 22nd General Meeting in Beijing (Source: PECC).

PECC invited youth representatives to participate in General Meetings and a dedicated program called “The Next Generation” program. About 40 students selected by member committees of PECC attended this year’s meeting including our student, Rohan Yargop. 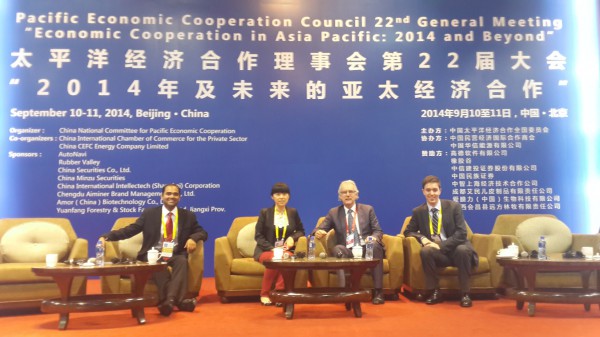 Rohan kindly shared his experience with us:

If I would have to describe my experience of participating in the PECC 22nd General meeting and next generation program in one word, it would be ENRICHING.

The Next Generation program was opened by the General Secretary of the International Secretariat of the PECC. The topic of the discussion was the Role of Cross Border Education in Regional Economic Cooperation. The sharing of ideas regarding this topic was very interesting and it gave an insight as to what people in general feel about the issues students face when they decide to go for international education.

There was a lot of talk about the role of PECC in capacity building for the institutions and universities involved in providing cross border education. Various issues like student and provider mobility, language acquisition, social and cultural shocks, financial affordability, qualification recognition were identified and were discussed in order to identify solutions and its possible implementation through policy recommendations.

The various sessions organized and the speakers who contributed made it a very enriching experience for me in terms of knowledge, information and the ability to look at the bigger picture and the challenges that economies in the Asia Pacific are facing as a result of the Global Financial Crisis of 2008 and the way forward for these countries and with all this role of organisations like PECC and APEC  in the whole process.

There was discussion on trade agreements like the TPP (Trans Pacific Partnership), RCEP (Regional Comprehensive Economic Partnership), FTAAP (Free Trade Agreement in the Asia Pacific) and the role of these agreements in opening up economies for businesses, reducing trade barriers like tariffs and quotas, achieving flexibility and uniformity in the Rules of Origin and basically arriving at a  consensus where economies sign trade agreements that are agreeable. With this regard one of the recommendations made by panelist Dr. Wendy Dobson of University of Calgary, Canada was consolidating MRA’s (Mutual Recognition Agreements) into one large agreement under the APEC.

Throughout the conference there was general agreement between the speakers that technological innovation is the driver of economic growth and countries need to work towards achieving efficiency in this field with the help of collaborations and sound policy support.

There was also a consensus on the fact that use of social media is a very integral part in order to engage the youth in the development process. Achieving efficiency in technological sector would boost the Global Value Chains which were helmed as a priority area by many panelists in order to achieve economic efficiency.

In this context it was observed that FTA’s (Free Trade Agreements) should be examined through the lens of Global Value chains and capacity building is required in order for inclusive development keeping the small holders as part of the value chain and integrating them with digital connectivity and more investment in infrastructure.

The need of financial interconnectedness and transparency over border transactions was identified by many panelists  as difficulties in these areas are hampering the trade activities presently. With this regard the setting up of the AIIB (Asia Infrastructure Investment Bank) proposed by the Chinese government was considered as a big positive step and that it would indeed help boost the trade and develop regional economic integration in the Asia Pacific. The role of APEC here identified was to act as a collective force to raise the issue of governance in financial organisations.

To sum up the whole experience, it is very evident that the way we see and perceive a world map is shifting from an Atlantic centered one to a Pacific centered one.

There is a huge amount of global trade  happening in the Asia pacific and the need of the day is to make it more structured, transparent, inclusive and conducive to overall economic development of the region.

In this regard APEC and PECC have an important role to play in terms of policy advise, improving supply chain connectivity, promoting collaborations between the business, academics and the political circles, and helping to achieve financial stability and regulatory reform