Those who live in Indonesia must realise there have been some changes in the way we purchase our food and the food that we consume. We have and see more of beef and dairy consumption. We see increased availability of and go more often to modern supermarkets. Yet, there has not been much written to document and evaluate these changes in particular to understand the drivers as well as implications for future policy making and implications for smallholder farmers.

“the Indonesian food policy debate has tended to focus on farming or foreign trade because of a long-held assumption that the domestic market is traditional and non-transformative. The policy debate and the research have rarely considered the transformations afoot in domestic food markets, yet the structure and conduct of the domestic food economy, in general, and of rural–urban food supply chains, in particular, are transforming rapidly”. 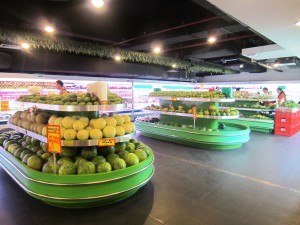 A supermarket in Indonesia

Several Global Food Studies researchers and research partners have recently published their work at Bulletin of Indonesian Economic Studies: Special Issue.on ‘Transformation of the Indonesian Agrifood System and the Future beyond Rice’.

The Special Issue summarises major changes in Indonesian agrifood sectors. One interesting finding is that Minot, Stringer, Umberger, and Wahida‘s article ‘Urban Shopping Patterns in Indonesia and Their Implications for Small Farmers’ using data from their primary survey of 1,180 urban households in Surabaya, Bogor, and Surakarta (Solo) — representing large, medium, and small cities, respectively, suggests that:

supermarket penetration of food overall is about 20% (versus cited estimates of, for example, 30%) and positively correlated with household income.

They also find that this penetration is most advanced among processed food products and only incipient among fruit and vegetables. The authors project that:

Urbanisation, supermarket penetration and changing diets are happening and the next question is how Indonesia should respond to these changes. At times, solutions to improve the efficiency of agrifood markets and the welfare of smallholders are beyond agricultural policies and programs. They also should include infrastructure development, improved education, etc. This Special Issue nicely highlights the changes and and how we should deal with the transformation of agrifood sectors. A definitely important piece of work that has potential to advise Indonesian policy makers and agrifood stakeholders!

The Special Issue also showcases some of the projects that our team has conducted in Indonesia. Dr Wahida shares her experience of getting involved in the design, delivery and analysis of the household surveys which then lead to the publication of one of the articles in the Special Issues.

At the moment, Indonesia food systems are undergoing significant transformation. Indonesian consumers’ diets have been changing as a result of rising disposable household incomes, urbanisation, increasing numbers of women in labour force and globalisation (Reardon et al. 2014; Umberger et al. 2015; World Bank 2007 and 2013). Indonesians are now consuming more diverse diets than they did a decade ago, including new varieties of fruits and vegetables, more and different types of protein, and increasingly processed and convenience foods (Reardon and Timmer 2014). 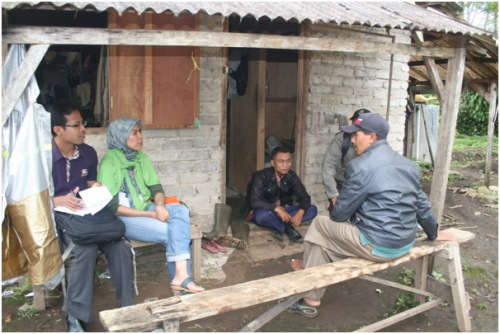 Dr Wahida during the fieldwork

Just recently graduated from PhD in Global Food Studies, University of Adelaide, I feel very fortunate to be involved and witnessed the complete stages of collaborative research between researchers from Australia, the US and other developed countries and Indonesian senior researchers and research students.

To better understand the transformation in the Indonesian agrifood system, Global Food Studies – supported by financial support from and in partnerships with other institutions such as the Australian Centre for International Agricultural Research (ACIAR), the International Food Policy Research Insitute (IFPRI) and Indonesian institutions including the Indonesian Centre for Agricultural Socio-Economic Policy Studies (ICASEPS) and Bogor Agricultural University – conducted more than seven large scale surveys between 2006 and 2013. Articles presented in this Special Issues reported results using data from those surveys.

These research collaborations have provided each of the team members valuable opportunities to better understand the importance of having robust methods in every stage of the research –  from exploring research gaps, developing research objectives, sampling and questionnaire design, data collection, data analysis, and putting all the ideas and evidence into a scholarly publication.

The message from the opening article by Reardon et al (2015) highlighted three main points. First, there is a huge opportunity for smallholder farmers to shift their focus away from rice-based to high-value horticulture and animal-based protein sectors. The empirical evidence in this series shows that these sectors allow farmers to climb the value-ladder. Second, new market channels and actors are emerging to develop and transform the rural-urban value chains. Third, modern food retailers such as supermarkets and fast-food chains in Indonesia still in the early stages of emergence and has placed considerable demands on public policy. Therefore, it is important for the Indonesian government to adjust its policies overtime and to support farmers who want to meet the rising quality and safety standards. At the end such support would benefit urban consumers, that will reach almost 135 million member of consuming class in 2030 (Oberman et al, 2012).

This collaborative research and the writing of the Special Issue would not be completed without great contributions and supports from our enumerators, data management specialists, and our research partners. I personally would like to dedicate this blog post to one of our best colleagues from ICASEPS Nur Khoiriyah Agustin (Inung), who passed away in 2013 at the age of 38. As beautifully defined by our research collaborator Dr Nick Minot “Her warmth, enthusiasm, and hard work are remembered fondly by all who knew her“.

The Special Issue is available HERE.