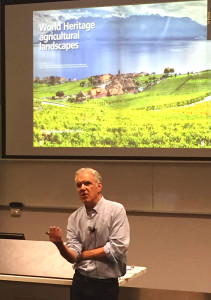 The agricultural landscape bordering Adelaide is like a huge city park. We trek, bike and drive through it; buying and tasting wine, figs, apples, cherries, strawberries and cheeses. It is more difficult, however, for us to recognize the diverse, less tangible values that make up the total wealth of this landscape. For example, how it contributes to our sense of place and the ‘livability’ of Adelaide — that difficult-to-define blend of economic prosperity, community cohesiveness and environmental health. It’s also a cultural landscape, reflecting how we live, work and play. Adelaide’s bordering countryside helps define who we are as a city and as communities, and how we differ from other cities around the world.

Countries such as Spain, Italy and France have been very successful in promoting and branding their agricultural landscapes- just think of the Champagne and Burgundy districts. Australia is one of the few OECD countries without a coherent national policy approach to protect and promote our agrarian landscapes. State-level approaches to promote South Australia ignore our world famous landscapes and instead focus on promoting our high-tech and clean energy capabilities.

Professor Randy Stringer presented at the Faculty of Professions Research 21 Presentation Series on April 28, outlining the work he is doing to promote UNESCO World Heritage Status for the Mount Lofty Ranges. Professor Stringer is part of a team working with eight regional councils to coordinate an effort to make the agrarian landscape bordering Adelaide a UNESCO World Heritage site.

World Heritage sites span 63 countries, recognising some of the world’s most amazing places. Australia currently has 19 world heritage sites, including the Great Barrier Reef, Uluru and the Sydney Opera House.

To be included on the World Heritage List, sites must be of outstanding universal value and must meet at least one of the ten selection criteria. The Mt Lofty Ranges World Heritage bid is on the basis of a link to an event of outstanding universal significance-South Australia’s colonisation, specifically the Wakefield Plan and the unique principles and policies which guided the colonisation process.

Many countries around the world are using World Heritage Sites for economic motivations. Pro-development benefits linked to World Heritage status include promotion of economic growth by bringing investment and tourism to the region, while at the same time improving the regions branding and raising its international profile.

In the case of the Mt Lofty Ranges, the benefits would be shared among the surrounding regions and Adelaide city, which is expected to capture half the benefits from increased tourist numbers visiting and staying in the city.

However, there is still some way to go. First, the Mt Lofty Ranges must be recognised on the National Heritage List, and Professor Stringer and the team will need to continue to build the case for the World Heritage bid, and communicate the benefits of the listing to the region.

We look forward to keeping you updated as the bid progresses!

This entry was posted in Current issues, Event. Bookmark the permalink.