A dairy farm in the heart of a city

Posted on March 6, 2017 by Natasha Caulfield

Below, Rohan Yargop, provides an insight into his recent visit to a dairy farm in the heart of the city. 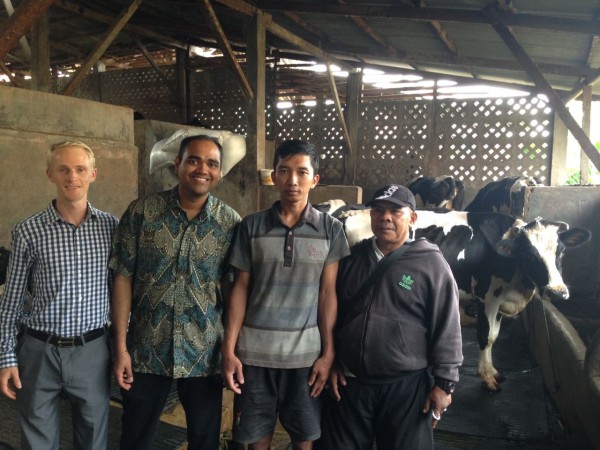 Urban farming systems are fascinating. While developed countries have seen a gradual and organic growth in farming systems, the case of developing countries is different. Developing countries in Asia often find themselves in a position of retaining traditional farming systems around rapidly urbanizing areas. I had the chance to visit one such farm on my recent visit to Bogor, Indonesia as part of Indodairy project led by CGFAR which is funded by ACIAR. The Indodairy project aims to address issues faced by dairy farmers in West Java and Northern Sumatra by understanding the complex value chains, identifying points of intervention, implementing extension programs and evaluating the impacts of the same with an overall objective of increasing productivity of 3000 dairy farmers by 25% by the year 2020.

Bogor is an important educational and cultural centre on the island of Java located about 80 Km south of Indonesia’s capital city Jakarta. With a population of over 1 million, Bogor is a rapidly urbanizing city. To arrive at this dairy farm driving through narrow alleys in a bustling suburb of Kebon Pedes was indeed a unique experience. This dairy farm is a family business headed by the patriarch and supported by his son and another staff member who work day and night and take care of all the activities on the farm. The dairy farm houses about 30 cows of which 28 are lactating. The cows are milked twice a day over a period of two hours. The yield of milk is estimated to be 10 litres/cow/day depending on the stage of lactation, climate and availability of concentrates. One of the key issues identified by the farmers was fertility and that the cost of each straw of artificial insemination was additional cost to the farmer. The feed for cows (grass) is bought in daily from a source that is located an hour away and cut by hand. Soy (tofu) is sourced from waste streams from the surrounding urban environment.

With regards to availability of resources, being in the middle of the city has meant unlimited water supply for the farm. The manure from the cows is generally washed into the nearby river which could subsequently contaminate the ground water in the area. The milk is primarily sold to individual consumers as the farmer gets a high price compared to selling the milk to co-operatives. There is no cold chain infrastructure, although the lack of a cold chain facility has not been an impediment to the operations on this dairy farm according to the farmer. The dairy farm shed structure is a high roof with concrete floors over two levels. Large troughs of cement are provided for water and feed for cows. The shed structure did bear signs of damage and lack of maintenance.

Upon asking the owner of the dairy if being in the middle of an urbanized area was a hindrance both for the farm operation and surrounding dwellings he answered by stating that the farm has been there for over 40 years and the operations are developed in a manner that pose no issues to the dwellings around the farm. Although a potential issue the farm could face is the ability of scaling up operations which is a challenge in the current location however close proximity to the market has also guaranteed a price which is premium.

This dairy farm visit was an interesting experience from a sense that as cities are growing rapidly and especially in countries where geographical areas are small in size how can urban farming systems not only operate but also sustain in the long run.