Recent developments to encourage economic integration via international agreements (these are not free trade deals) often include a clauses allowing for the ISDS process to be included.

For full details about ISDS (see here) but, in essence, it allows companies in one country to litigate against the government in another country if they introduce some legislation or regulation that may negatively impact on their business. These may include things like a:

From that same website a total of 767 legal proceedings, 495 have been concluded, and if you look at the data in the UNCTAD chart, about 50% of the time the company has won or received some form of compensation in regards to an out of court settlement 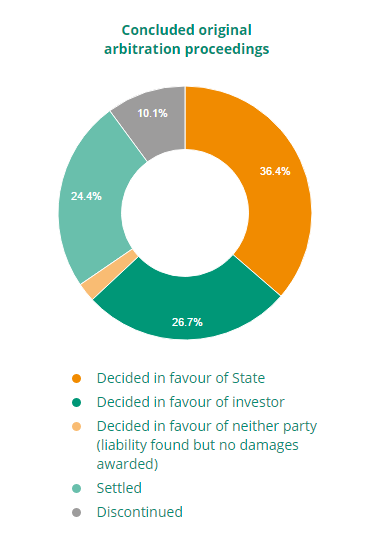 Since 1 December 2012, all tobacco products in Australia must be sold with plain packaging. This packaging must include extensive health warnings about the danger of smoking. This policy rapidly gained attention by multinational tobacco companies and it has been targeted as an infringement of their rights (IP), etc.

Both ISDS and other remedies associated with challenging barriers to trade have been used against Australia’s plain packaging. The ISDS was used by Philip Morris Asia Limited via Australia’s bilateral agreement with Hong Kong but lost their case in 2015. In 2016, it was estimated that Australia spent over $50 million in this court case.

Well, the further good news is that it has been reported that the WTO will find in favour of Australia and that plain packaging is not an impediment to trade. This is another huge step in preventing the current estimated 15,000 Australians who die annually due to tobacco-related deaths and the $31.5 billion in associated health and economic costs.

Inevitably, Australia’s plain packaging stance will be challenged again, and every time other regulations are altered international companies will consider their opportunities for filing claims. Our policy makers need to be very careful if they continue to sign international agreements that aim to develop a level playing field. As I concluded in an article in 2016,​

“As a nation we need trade. However by harmonising regulations we have a new level field, but we have also adopted a new set of rules, and we are possibly unaware of the consequences from doing so. Perhaps rather than accept lower standards, it would be in our national interest if within these side agreements, countries adopted our rules.

When Pandora closed the box she left hope trapped inside. Perhaps it’s our ability to still close the lid on deals that have not been ratified and think again of what we want in our national interest and not just another photo op.”

This post was orginally published on Dr Adamson’s blog, where you can read more about his research.

This entry was posted in Current issues and tagged policy, trade. Bookmark the permalink.