GFAR researchers in India and Bangladesh for the Happy Seeder Project

In one of our earlier blogs, we wrote about the practice of stubble burning in the Indian Gangetic Plains that has led to tremendous levels of air pollution in the region and has had a severe impact on the daily lives of people residing in the Indian capital city of New Delhi and surrounding urban areas. There has been significant encouragement from the scientific community to adopt conservation agriculture technologies like zero tillage as ideal practices to ensure environmentally friendly agricultural practices whilst maintaining soil health and quality of nutrients in the soil.

The Australian Centre for International Agricultural Research (ACIAR) has been one of the leading research organisations that has funded various conservation agriculture related research projects across the Eastern and Western Gangetic Plains. ACIAR in collaboration with Punjab Agricultural University in India has been at the forefront of one of the most innovative Zero Till technologies called the Happy Seeder. This machine allows the farmer to sow wheat along with fertilizer directly into rice stubble that is left after harvesting, removing the need for burning. The Centre for Global Food and Resources (GFAR) is now a key partner in a project funded by ACIAR that looks at adoption of the Happy Seeder technology with a view to identifying potential solutions for policy makers and the farming community in the North Indian Gangetic Plains.

Last month a research team comprising of Dr. Adam Loch, Dr. Jay Cummins and Rohan Yargop visited India and Bangladesh to conduct a value chain analysis study and to initiate data collection from farm households to identify what constraints farmers are facing in adoption of zero tillage technologies; especially the Happy Seeder. The focus in India includes Punjab, Haryana, Bihar and West Bengal while in Bangladesh the project activities are focused in the North West in the Rangpur Division.

The value chain analysis exercise comprised meeting and interviewing stakeholders involved in the Happy Seeder and Zero Till Drill production, supply and dissemination of these technologies to the farmer. The researchers met with the manufacturers of the machinery to understand their perspectives on the future of these technologies, and to get a sense of the multitude of challenges that manufacturers face ranging from infrastructure to labour availability. The dealers and custom hire service providers were also interviewed for the value chain analyses.

The GFAR team also met with various research and extension officials from the State governments and Central government who are involved in spreading awareness and educating farmers about these technologies. The value chain analysis will help identify barriers to adoption that currently exist, which could be addressed with sound policy implementation. In addition, a farm household survey has been implemented in collaboration with IDCG–a private consulting firm with expertise in survey design, implementation, monitoring and feedback—which will seek responses from around 500 farmers on their views about zero-tillage technology and its adoption.

Finally, on this visit Dr. Adam Loch and Dr. Jay Cummins conducted a project inception workshop for the Eastern Gangetic Plains region at Siliguri, West Bengal. The workshop was attended by key policy makers, and researchers from CIMMYT involved in the SRFSI project funded by ACIAR. Although the burning of rice stubble has not been practiced quite as much in the Eastern Gangetic Plains (Bihar, West Bengal and North Western Bangladesh), there is tremendous scope for implementation of conservation agriculture technologies.

Rohan Yargop conducted the final project inception workshop in Bangladesh in collaboration with RDRS Bangladesh. Key policy makers and extension officials from Bangladesh Government, researchers from CIMMYT and farmers from the region attended this workshop. Rohan Yargop also had the opportunity to interact with the Australian High Commissioner to India, during her visit to the Borlaug Institute for South Asia to meet with key researchers and farmers to understand how Australia can contribute to the efforts in reducing stubble burning and uptake of conservation agriculture technologies like the Happy Seeder.

This project intends to add value to the research activities currently undertaken toward accelerating the adoption of Zero Till Drills and Happy Seeder technology that will lead to a reduction of residue burning and boost sustainable food, energy and water security. 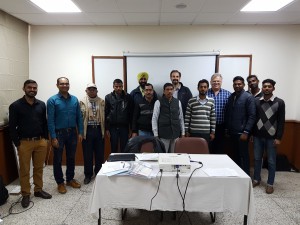 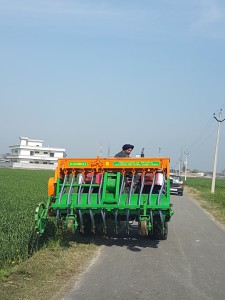 A farmer with his Happy Seeder machine in Punjab, India

This entry was posted in Current issues, Research, Uncategorized. Bookmark the permalink.