Each year The Australian Farm Institute hosts a Roundtable conference with a topical theme. This year the conference was held at the National Gallery of Australia in Canberra on Tuesday 16 October with the theme “Evidence meets emotion”. This theme follows on from their John Ralph Essay competition earlier in the year on the topic “society should determine the right to farm”. The winning essay submission by Deanna Lush is available here: http://www.farminstitute.org.au/news-and-events/FPJ_Summer2018_JRC_Winner2.pdf. In addition, if you are interested in the topic, a selection of submitted essays will be published in the next issue of the Australian Farm Institute’s Farm Policy Journal.

The essay competition and conference were both designed following recognition of the importance of the community and consumers exerting influence on the actions and behaviours farmers are allowed to take on farm and the decisions they make regarding where to sell their produce. A term commonly used to refer to ongoing acceptance of actions or behaviours by local communities and stakeholders is the ‘social licence to operate’.

This is now a blog in two parts.

Each of these sessions presented issues and then questions to be addressed and/or potential solutions or needs to address issues. Some key points from the discussions are included below.

You probably guessed it. Evidence is rarely (if ever) enough, especially when presented on its own. In addition to this point, the following two points were presented in talks by Bernie Hobbs and Richard Heath, respectively and I think they are particularly pertinent.

Are you in the middle of organising a conference? Are you about to start one soon? This conference did two things that I had not seen before (and quite liked).

Firstly, they set up a conference-specific platform on www.slido.com to allow the audience to submit questions throughout talks or participate in polls. Questions posed in this way allowed like questions to be combined before posed to the speaker and the most popular questions to be prioritised. In addition, with all questions recorded in this way if there was insufficient time to have all questions covered in the Q&A sessions, speakers were able to follow up with questions at a later time.

The second (and possibly most cool thing) was ‘live’ note taking in pictures on white boards throughout each session. This conference used the very talented Jessmay Gee to capture the themes in each of the presentations and the following Q&A sessions. You can see more of Jessmay’s work on her Twitter/Instagram at @JessamyG_draws. 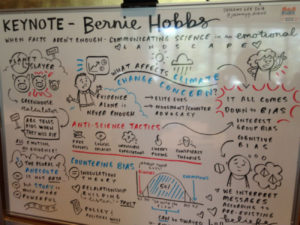