GFAR researcher, Rio Maligalig, participated in the 5th International Rice Congress (IRC2018) held in Singapore from 15 to 17 October 2018. The congress is held every four years and is the world’s largest gathering of scientists, researchers, industry experts and players in the rice sector. The theme of this year’s congress was “Transformative Science for Food and Nutrition Security”.

The IRC2018 officially opened on 15 October with message from H.E. Lawrence Wong, Minister of National Development, Singapore and keynote address from Gilbert F. Houngbo, President of the International Fund for Agricultural Development (IFAD). In his keynote address, Mr. Houngbo emphasized the need to invest in rural transformation that is sustainable and inclusive. And with the challenges that the agriculture sector is facing such as climate change and depleting resources, small scale farmers, including the youth, will need many innovations, from new cultivation practices to new sources of financing. 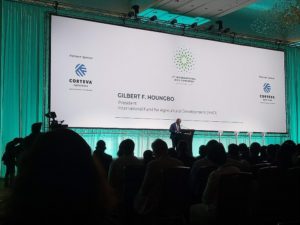 The IRC2018 also organized a special World Food Day program on 16 October. A panel discussion was held to share thoughts and ideas on how the youth can lead the way towards a zero-hunger world by 2030. Some of the key messages include listening to the youth and taking into consideration their voice in policy development and providing the youth with role models or mentorship programs. 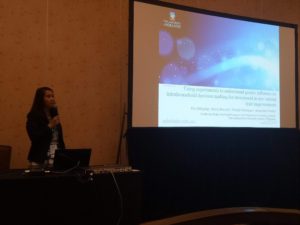 Rio Maligalig during her presentation at the IRC2018

Rio also participated in a Scholars Café session, organized by Dr. Matty Demont. The session was organized to bring together all the research done by Postdocs, PhD scholars, and other researchers under the Flagship Program 2 (FP2): Upgrading Rice Value Chains of the CGIAR Research Program (CRP) on rice agri-food systems. Six pairs of scholars from a pool of FP2 scholars attending the IRC were randomly drawn. The six pairs were asked to prepare a joint 10-minute presentation wherein they presented and aligned their research through a common framework, identified common challenges (both in terms of doing the research and in upgrading the rice value chains), developed policy recommendations and proposed suggestions for joint future research. Rio was paired with Helene Ba, PhD Student at the Paris Est University in France. Helene’s research is on how to internalize sustainability standards in contract farming. For joint future research, Rio and Helene suggested the use of experimental games (i.e., IGA) in eliciting farmer preferences for improvements in contract farming attributes. 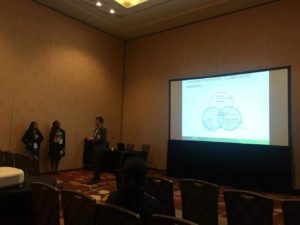 Rio Maligalig, with Helene Ba and Matty Demont during the FP2 Scholars Café

The IRC2018 was organized by IRRI, along with the Agri-Food and Veterinary Authority of Singapore (AVA), and with the Food and Agriculture Organization (FAO) of the United Nations as the international partner.