I applied to go on an exchange because I realized that I have gotten too comfortable with my life in Adelaide and I wanted to travel to a different country and experience a new life. I chose South Korea because I haven’t been there before and I have always been interested in learning the Korean language. Before I left for Seoul, I was rather excited at the thought of finally being able to step out of my comfort zone and be able to spend about four months alone in a foreign country where I knew absolutely no one. It was a one of a kind opportunity to start my life all over again.

My first two weeks in Seoul was not the most pleasant experience. I was faced with a huge culture shock for which I was completely unprepared for and I found it difficult to see things in an optimistic point of view. I think I could have dealt better with the culture shock if I had done some proper research about the Korean culture and what to expect before leaving for Seoul. Although I had also expected that I would struggle with communication in Seoul due to my lack of ability to speak the language, it turned out to be much more difficult than I had expected because the locals were not very foreigner friendly and most of them refused to speak English. But once the semester began and I started to attend the intensive Korean language classes offered in my host university, I was able to practise my newfound basic Korean speaking skills and it was obvious that some of the locals really appreciated the effort. Eventually as I learned to embrace and adapt to the Korean culture and behaviours, I began to enjoy myself on my exchange programme. I learned that no matter where you go, you need to have an open mind to accept that everyone is different and always try to see the good in everything.

Getting used to the lifestyle and fitting in with the locals may take a while but getting your life started is quite fast and easy in Seoul. Although most locals do not speak any English, the public services were quite foreigner friendly in general. You could easily find a mobile service provider or a bank at any corner of the city and most of the branches have English speaking staffs to help foreigners get started with the basic necessities with complete ease. Aside from that, traveling from one place to another whether by foot or the metro is always easy. The Seoul metro is extremely easy to understand and convenient to get around and I believe that Seoul is the kind of city where you could get to any place just by walking because the structure of their streets are so connected and well planned. Getting lost was never really a concern for me in Seoul because I know that I would always find my way somehow. Furthermore, Seoul is probably one of the safest cities I have ever been to. Even at 3am, you would see couples on the street dating and friends hanging out at restaurants or coffee shops that are opened for 24 hours.

Here are some pictures of places I visited in Seoul: 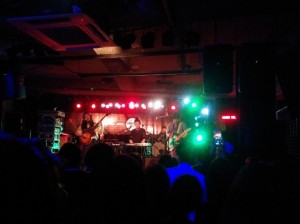 This picture was taken during ‘HongdaeFest’, a music festival with local bands of all sorts of genre from psychedelic rock to blues rock and even reggae which played every weekend for a whole month at Soundholic, Hongdae. 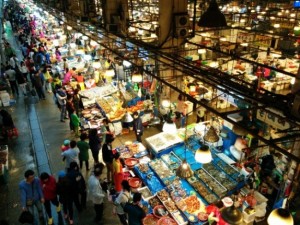 The Noryang fish market. This where you can find possibly some of the freshest seafood as you watch the fish you purchased get killed right in front of your face and have it sent to a restaurant of your choice(which is just one floor above the market) and have it cooked immediately. 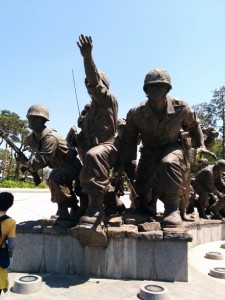 The War Memorial of Korea is a must visit if you are interested in knowing more about the history of the Japanese Occupation in Korea and how both Koreas were divided. 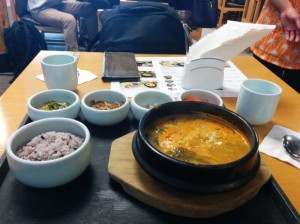 This exchange programme has definitely been one of the best experiences in my life and I honestly think that anyone, if given the chance should definitely try living in a foreign country for at least a few months. The exposure and life lessons you gain from such an experience is invaluable. I am so glad that I did not give in to my initial fear of living in a foreign country without being able to speak the language. Back in Adelaide, I knew that I could always rely on old friends for help, but living in Seoul has taught me how to really live alone. I had absolutely no one but myself to rely on and that really gave me a new sense of independence. After living in Seoul and having made so many new foreign friends, I wish to explore other countries and maybe someday I will return to South Korea to visit the places that I wasn’t able to visit during my exchange.