Semester Exchange at the University of Pompeu Fabra – by Robert Boucaut

Posted on September 2, 2014 by Study Overseas

20 hour plane trip home seems like an ideal blogging time. It’s kind of impossible to sum up this kind of experience in 500 or so words, but I’ll do my best. I came to the start of my exchange terrified of finding out that I didn’t know who I was without the constants of family and friends and work and study, the kind of routine that is just naturally adopted. This time away has been valuable to me greatly because it informed me that I in fact did have a grip on who I was as a person, I just hadn’t given myself the chance to extend him into the unknown.

And it was one hella fun extension into unknown. We don’t really grasp that humans have quite wonderful adaptation instincts when we don’t often flex those muscles, but despite the initial shock you quickly rise to the differences and challenges of the situation. Going to Barcelona, I had to work with an indifferent (sometimes liberating, other times frustrating) style of organisation in university and general formalities, and an exchange student cohort with priorities of partying and not much else. I guess that doesn’t sound like that much of a challenge, but it was a jolt to the system that can only be for the better from now on; not everything has to be so serious all the time. And parties are fun. Really fun.

So is travelling, and upon arriving in the other side of the world I quickly understood the need to dip my toes into as many countries as I could afford. Aside from every corner of Spain and Catalonia, I’ve hopped to Italy, France and Britain, skied in Andorra, road tripped through Portugal and even had a night in the Sahara.

Truth be told, my Spanish language, which was one of my main motivators for the move, did not improve to the extent that I had hoped. This is in part Barcelona’s fault, as a city with a popular majority of Catalan separatists who would be offended by my trying to practice speaking Spanish with them. It was also my fault, because I found it all too easy to slip into the groups of exchange students with English as the common language. A bit of a bummer, but I haven’t beat myself up about it because I don’t regret having made the great friends that I did in the group, and that was sort of the trade off. Inevitably my speaking and listening did improve to the extent that I passed a course taught in Spanish, which to me was reaching a goal slightly lower than fluency. And this sort of social vs. intellectual crisis taught me a bit about idealism and reality; some of those Before Sunrise fantasies of mine never came to be, and that’s just fine.

Now at the conclusion I see just how short seven months actually is. That was inevitable I guess. I am thrilled with what I’ve seen, gobsmacked at the wonderful friends I’ve not got scattered around the world, and proud of myself. 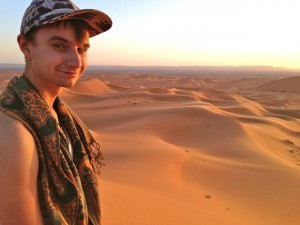 A sunset in the Sahara. 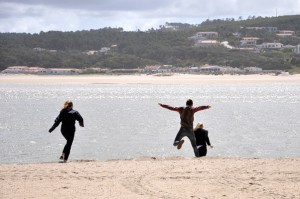 From my road trip in Portugal. 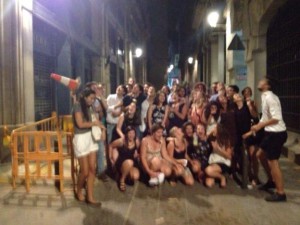 My Barcelona family having water thrown on us because we were too loud.