The Beginning of My Exchange – by Madelaine de Valle

Posted on December 1, 2014 by Study Overseas

I have now been living in Japan as an Osaka University student for two and a half months, and I can say without hesitation that they have been the happiest two and a half months of my life. Comparing this to my previous exchange experience, I know that my time here thus far has been a charmed one. Although there have been a couple of minor inconveniences, the overwhelming majority of my days have been spent in a kind of carefree bliss. My advice for anyone considering coming on exchange (particularly to Osaka University) is to just do it and don’t look back.

As foreign as this sentiment seems to me now, by the time my departure date arrived I was still not sure if going on exchange was the right thing for me to do, or more particularly, if now was the right time to be doing it. Things were going so well for me in Australia – good grades, a fantastic job and a partner I adore – what if leaving now meant disrupting all of that in some irreparable way? I was excited, of course, to be returning to a country I loved, to have the opportunity to try out a whole different style of life, and to meet friends from all over the globe. But, that excitement was definitely tinged with apprehension. 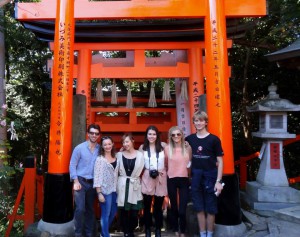 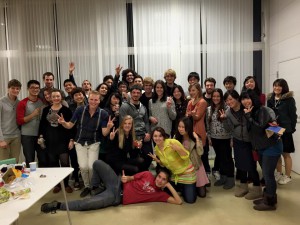 When I arrived in Japan I was almost delirious from lack of sleep, but my first big challenge was already upon me; navigating from the airport to my dormitory. I had been sent instructions on how to make the trip, but I had no idea how long it would take and I fast realised that I had no idea where I was meant to catching the bus for the first leg of the trip. Luckily, a kind gentleman took pity on a confused foreigner, and directed me to my ticket stand and bus stop. From there, things were actually surprisingly easy, and on my way I even met a girl who was headed to my dorm as well. Having not been in Japan for even 2 hours, making a new friend was a great relief, particularly as I strongly agree with the notion that it’s better to be lost with someone than to be lost on your own. With the aid of our directions, we made it to our dormitory with relative ease, and were soon guided to our respective rooms. I think the reality of my situation only sunk in once I’d unpacked my belongings and decorated my room. I remember I was sitting on the bed, surprisingly energetic despite my lack of sleep, and it finally hit me that I was going to be in Japan for the next six months. Without wanting to sound too corny, all my apprehension just kind of dissipated, and it hasn’t returned since.

The major challenge upon arrival was undoubtedly jumping through bureaucratic hoops. Of course, no matter where you go there is going to be a fair bit of paperwork to get through, but I really think Japan is particularly frustrating in this area – the sheer volume of paperwork I have had to complete since coming here is astonishing. I was lucky enough to get a lot of help from some Japanese students living at my dorm, who translated the many forms I needed to fill out, and to be accompanied by a Taiwanese girl with impeccable Japanese on my trip to the town hall, because without them it would have been very difficult indeed. Unfortunately, I had to go through the process a second time not even a month later, as I was changing dorms and therefore technically moved to a different ‘city’ within Osaka. It may be a convoluted process, but to be honest it’s really the only complaint I have about my time here so far, and it’s quite a minor one. 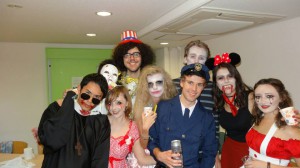 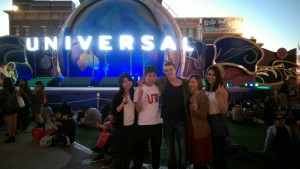 The process of settling into life in Japan was made immeasurably easier by the friends I made in those first few weeks. Getting to know the people I was to be living and studying with, more than any single event from the first month of my exchange, stands out as the highlight. I am a bit of a shy person by nature, but in the first week or so I just decided to put that to the side and force myself to talk to people. This was made easier by the fact that all of us were of course in the same position; newly arrived in a foreign country and without any friends. I heard that a group of people were going to meet in the lobby of the dormitory one morning to take a trip to a temple, and despite having hardly spoken to any of them yet, I decided to tag along. This proved to be an important day, in that the people in that group have now turned out to be my closest friends here. We quickly started organising more activities for the people in our dorms and before we knew it everyone in our dorm had bonded in that special way that alcohol tends to encourage. That same bunch of friends and I have now gone on many sightseeing trips around Osaka, spent several days in Kyoto, and we are going to Sapporo and Tokyo together over the winter break. I guess the point I’m trying to make for any new exchange students would be to just put yourself out there; in particular, keep in mind that everyone is in the same boat, and the fact that you all chose to be in the same place means that you probably already have some similar interests that will form the basis of your new friendships.

I could spend a lot of time waxing lyrical about my time in Japan, but it might very well sound like teenage poetry, and nobody really needs to hear that. Put simply, my major sentiment about my exchange so far is just unrelenting gratitude; that I was financially capable of doing this, that the university accepted and facilitated my application, that I’m here right now, that I’ve met the people I’ve met and that I’ve done the things I’ve done. I’m quite certain that on top of the mere fact that I’m living overseas, what’s really making this experience so utterly wonderful is the fact that being on exchange means having the bare minimum of responsibilities. Of course, you need to keep up with your studies, pay rent and keep your living space tidy but… there’s not much more than that. I’ve gone from dedicating most of my non-university time to working almost full-time, to running off to Kyoto every other weekend, going bar-hopping several times a week, using my annual pass at an amusement park several weeks in a row… Of course, I can’t live like this forever, but that’s exactly what makes this so exciting. Right now, I have the kind of leisure time that I might not have again for years, and I am absolutely planning to take advantage of that wherever possible. I would unreservedly encourage anyone who is considering going on exchange to just set aside any reservations and do it, because as much of a cliché as it may be, this really is the kind of thing that you get to do once, maybe twice in a lifetime, and it is endlessly rewarding.