Exchange at the University of Oslo – By Eliot Kirby

My Exchange So Far…

My exchange to Norway started in August 2015 with me getting completely lost as soon as I got to the central station in Oslo. I was carrying all of my 25 kg’s of luggage in a rucksack and while I had thought I had gotten good directions as to how to get to uni, pick up my keys and then get to my apartment I ended up walking for an hour in order to find the university and then the right train to get on. After a lot of walking I ended up in my apartment, dripping with sweat, with no food to eat and all the shops being shut. However the bar at my village was open so I went for a drink, best beer I’ve ever had. After chatting to the guys there I ended up getting a volunteer position with them, now I help run the place as a member of the management board. Through working at the bar I met all my current friends who I’ve had some great times with, here’s us at Christmas dinner. 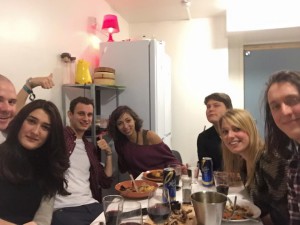 During my first two weeks in Oslo I got to spend a day at Oya music festival, had a great time seeing Beck and Alt-J, especially Beck 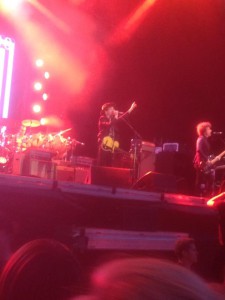 However the beer at 10$ a pint led to a sober day and the choices of festival food they had were a bit weird, 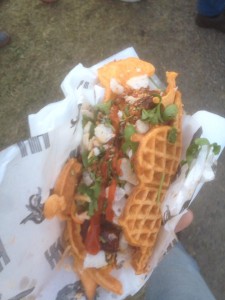 Luckily after a few months I found a Norwegian who made me some proper meatballs, definitely better than Ikea meatballs although pretty similar. And I’ve been bribing him with my cooking to keep making me Norwegian food ever since. 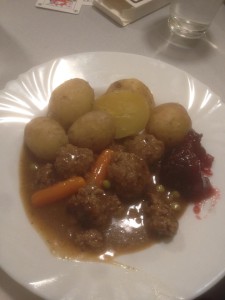 After the end of semester I got the opportunity to travel around the country a bit. I started by getting the 8 hour train to Bergen, which was a very beautiful journey although a fair bit of it was in darkness as the sun goes down by 4 o’clock in the winter. From Bergen I caught a ferry to Alesund which is a small coastal town near the Geirangerfjord, a UNESCO world heritage listed natural site. Unfortunately with it being winter no tourist transport was available to get from Alesund to Geiranger and the only option was to drive. After 2 hours on icy roads, mostly in the dark and on the wrong side of the road I got to the fjord. The sites in the fjord were absolutely amazing and well worth the stress of the drive, definitely would recommend a trip here, even in the off-season as it was nice not having anyone around. After the drive back and a long train trip back to Oslo I was home and ready from Christmas and New Year’s. For Christmas Eve dinner I attempted making the local Christmas food Lutefisk, a form of dried cod rehydrated in lye. Sufficed to say it was absolutely terrible, maybe the recipe I used wasn’t quite right but I have been told by the locals that eating it once a year is more than enough, definitely something to avoid in Norway. Looking forward to many new adventures in the semester to come and am currently planning a few more trips around the country. 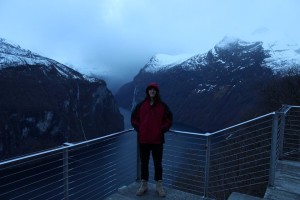 (me freezing at the Geirangfjord)