Exchange at the University of Nottingham- By Ciara Fanning-Walsh

In Semester 2 2015 I was fortunate enough to complete an exchange at the University of Nottingham in Nottingham, UK. In September 2015, after a year of organising and saving hard, I arrived on campus ready for Freshers Week and the semester ahead of me.

Nottingham is a similar sized city to Adelaide, it has everything you could need – clubs, bars, cinemas, shopping centres, ginormous supermarkets – without the congestion and hustle and bustle of a properly big city.

The city itself is perfectly placed smack bang in the centre of England – only a 1 hour and 40 minute train journey from London, which made this feasible for a day trip if booked far enough in advance (tickets get very expensive very quickly!) or certainly for a weekend or night or twos stay. This was also very handy as I was able to tell friends who were travelling in the UK to jump on a train and come and stay with me for a couple of nights! Nottingham is also serviced by East Midlands Airport where you can fly direct to Europe for cheaper than a train ticket to London! I was able to fly directly to Amsterdam for $40 Australian, a trip that took less than 2 hours! 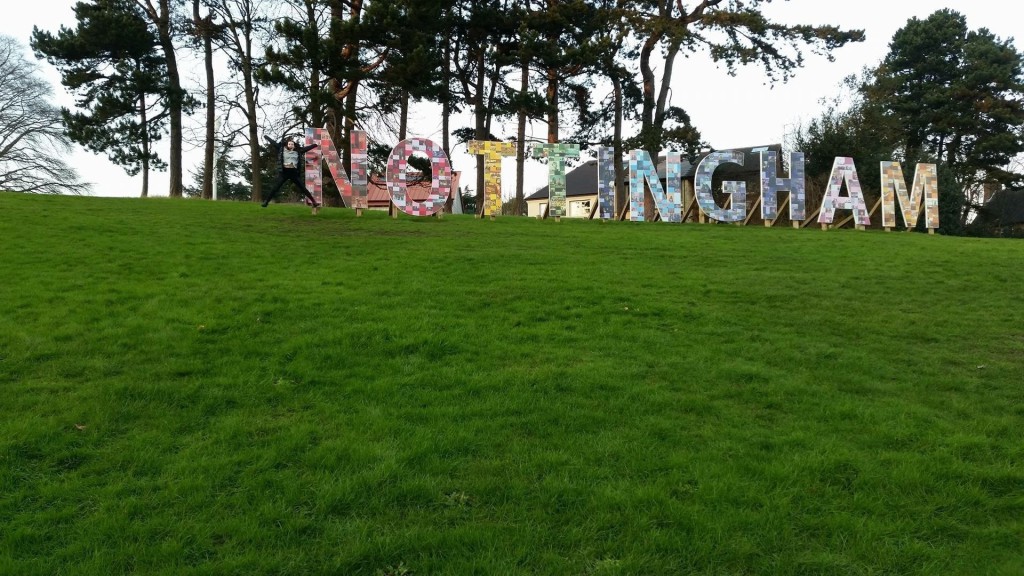 The Uni has a real sense of campus life, with most of its building being on the Unversity Park campus which also housed cafes, burger bars, a chemist, a doctor and a physio, a mini supermarket and a fabulous food court! There are 12 halls of residence on the Uni Park campus – I stayed in Derby and had a fabulous time. Keep in mind that most of the local students who live in halls are first years (so typically 18-19 year olds), however there were international students as well, in my hall alone I ended up with two others from Adelaide Uni and discovered we had mutual friends (classic Adelaide).
The campus itself is green and beautiful (and VERY HILLY). You are surrounded by trees, rolling green hills, and squirrels everywhere that you look (there is even a hotel if you have any visitors!). The Uni prides itself on sport, there is a full sized pool, football/rugby/hockey pitches and they are in the process of building a new sports centre, complete with a rock climbing wall! The temporary centre that they have built for students to use while the new one is being constructed is far better than anything I have ever seen in Adelaide so I can only imagine how amazing the new one will be!

Nottingham has an incredible sport and clubs program – no matter what your interests are there will be a club for you. I was fortunate enough to be selected for a team as part of the Netball Club, where I made many lasting friendships over our Wednesday afternoon matches followed by our Wednesday evening socials each week.

When I was there the exchange rate was particularly awful, however going out still managed to be cheap in comparison to Adelaide. With each club and bar offering student deals on designated student nights out, a Jaeger bomb could cost you as little as £1.50 and a vodka shot or vodka mixer around £2! The students of Nottingham definitely know how to party, and there is an event of some sort on every night of the week!