Posted on September 9, 2016 by Study Overseas 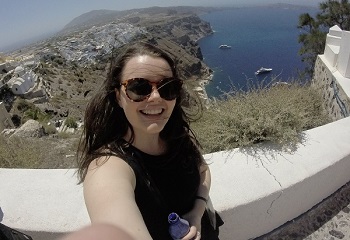 I’m Rachael. I’m your typical third year Law/International Studies student, studying at Adelaide University, forever hunting student discounts, and sleeping less than I should. In many ways, I’m just like you, except that in 2016 I’ll be studying abroad at the University of Edinburgh!

Choosing to go on exchange wasn’t an easy decision, but it was one that was inevitable. While on a study tour in China, I was sitting with a group of older students, many who had been on exchange, and a few who had regretted the fact that they hadn’t. In that moment, I realized that I was going to join one of these groups, and that if the hash tag phenomenon had taught me anything, it’s that I should have #noregrets.

While that sounds pretty simple, there was a lot of deliberation in between that night in China, and where I am today. I needed to choose a city of live in for the next six months, I needed to say goodbye to my friends and family, and I needed to sort out so many logistics, that it made enrolling into your ideal timetable a walk in the park. This was stressful, and if I’m being honest, a bit of a deterrent from studying abroad. I thought that if this was only the pre-departure preparation, how could I make it through the departure, arrival, and living preparation.

In the end, I managed to get through it, and in the process learnt a lot about how to hassle people over email, use Google Translate like a pro, and cope with lots of conflicting information.

I left Adelaide a few weeks ago, and have been travelling through Europe since then. Even in these few weeks I have confronted many new experiences, like sleeping in a 48 person dorm, shower shoes, and Trdelniks*. As exciting as this is, I’m still unsure about what lies ahead of me at Edinburgh. Studying in one of the best politics programs in Europe will be a challenge, and will push me academically. Settling into a routine, independent of my friends and family will also be challenging, as homesickness and my want for creature comforts may set in.

In light of that, I’m still excited for my experiences to come! Even if they are trying, and push me until I wish I were home, I know they will change me for the better. After all, I’m over here for an experience, not a holiday, and I hope that I can become the best version of myself while I’m here.