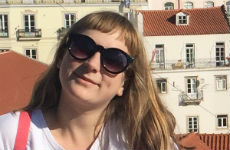 I’m Gina, I’m 19, and for the first half of 2017 I will be going on Exchange as a student of the University of Nottingham in England. I wanted to go to England, where I have family and some friends, and where I can study creative writing. But apart from that, no specific place in mind, I chose the University of Nottingham because it’s close enough to London, and because someone told me it was a wildly wicked and friendly place. Nottingham is situated smack bang in the middle of England and is about two hours by train from London. It’s got a fab creative writing and english department, and a city with a warren of little streets and corners, according to an afternoon on Google maps. Apart from that, I honestly don’t know much about where I am headed, presumably to some far off magical kingdom where Robin Hood and Maid Marion run around forests and play hide and seek with Little John and the Sherif of Nottingham.

I’m excited for adventure, long walks on winding paths. New and interesting ways of learning, new people and places. I’m backpacking around Europe before I start studies, and hope to see as much of the UK as I can in trips out of Nottingham. Lots of trains and hostels, and sight seeing and baffling conversations with interesting strangers in bars.

But I’m also excited for routine. For a new walk to class that doesn’t involve the Outer Harbour train line and the trek down North Terrace. For swiftly formed friendships that become well worn and comfortable within weeks. For new traditions to spring out of weekly visits to the local pub, or the barista remembering my coffee order (even if they don’t understand the concept of a flat white). University exchange and travel offers this, a completely new lifestyle shaped the way you want it, to fill with countless memories. I’ve never been away for more than a month, how quickly will I lean into living in an entirely new surrounding? Things are blurry at the moment, but with every new plan I make, every bit of research and every penny I earn in my soul crushing hospo job, the future becomes sharper and details are clearer. I’m beyond keen for whatever lies ahead.