GLObewriter: Gina at the University of Nottingham

Gina Cameron is studying on exchange at the University of Nottingham in England, for Semester 1 of 2017. As a GLObewriter she is sharing her experiences with us every month. 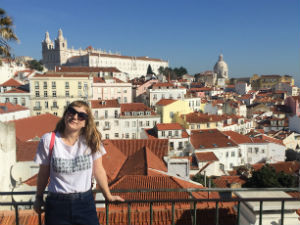 Overlooking the white houses of Spain.

After I’ve hauled my suitcase into place on the luggage rack, stowed my backpack under my feet, I lean back in the seat and breathe a sigh of relief. This is the last in a long number of train journeys taken between various European cities on a rail pass. Beginning far up in Finland in Helsinki for New Year’s then making our way down to brightest Granada in Spain, I’ve finally begun this last journey for at least a few weeks; that of the train from London to Nottingham, where I’ll begin my university exchange.

I should probably be more nervous, shaking in my seat at the thought of starting fresh in a completely new place, knowing not a soul, but I’m not. I reckon I’m still fueled by a rushing sense of accomplishment at having managed to successfully backpack a length of Europe relatively unscathed, give or take a few inevitable snags along the way (shout out to the man in Helsinki who handed in my wallet and British passport into the airport’s lost property, and shout out to the friend of my mother who offered to pick it up and mail the said wallet and passport to an address in the Netherlands, I quite literally wouldn’t be here without you). 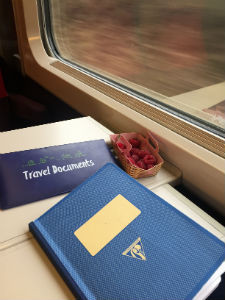 Finally on the train from London to Nottingham.

And so the prospect of dropping down my bags and residing in one place for longer than three days is truly wonderful. I’ve seen so many spectacular views of cities, artworks, craned my neck to take in the ornate ceilings of cathedrals and palaces. And in the same way I’ve met a ton of wonderful and fascinating people. Like the old man who hadn’t stopped travelling since 2004, or the chick in our hostel in Berlin who eerily shared the same name and birthday as me (we think she was lying but what a strange lie, right?) Yet moving from place to place so quickly has meant that the faces met along the way can so easily blur past as quickly as the cities.

And yet there’s this great sense of serendipity inherent in any new friendship formed, wonderment at the fact you both decided to travel to this place, both chose this hostel, were put together in the same room or bumped into each other at this particular bar. I can imagine this is the same for exchange, because in a few hours I’ll be completely alone in a place full of people who have chosen this university as well.

I’ve noticed a kind of reverence put into newly formed friendships while travelling or in a new place, as we grow to realize just how valuable an acquaintance can be. Not just because at some point in the future they may be in possession of a couch for you to crash on. I’ve found how natural it can be to ease into companionship with any perfect stranger.

After the month I’ve had I feel like I am prepared for anything – deadlines, making friends, managing not to lose vitally important possessions (all considerable challenges). A smart person would be shaking in their seat, but I’m relaxed and ready to face whatever lies ahead.