Gina Cameron is studying on exchange at the University of Nottingham in England, for Semester 1 of 2017. As a GLObewriter she is sharing her experiences with us every month. 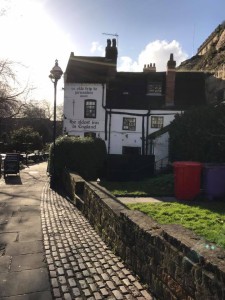 Ye Old Trip To Jerusalem claims to be the oldest inn in England.

I’ve been in Nottingham for about two and a half weeks now, and honestly it’s been pretty smooth sailing. I should be talking about the challenges I’ve faced, all the hardships overcame etc, but actually it’s been really excellent.

I’ve been placed in Florence Boot Hall (affectionately named Flo Bo), given a double bed, a wardrobe, a sink, a desk and a window overlooking the park. Having arrived a few days late, I had the misfortune to miss certain introductory events. I’d been having nightmares of some depressing Hollywood High School situation where I would be forced to sit by myself, or take my tray into a lonely toilet cubicle like Lindsay Lohan in Mean Girls. However, just as I walked in to the dining hall, bracing myself for the absolute worse, a girl walked up to me and said ‘you must be new, do want to sit at my table?’. Word for word. What an angel.

And so just like that I’d been welcomed into the circle of some completely lovely people, all eager to know just how many deadly creatures I’d encountered, and did I know how to surf. Of course, just about no one’s heard of Adelaide, apart from one bloke who’s cricket mad, and I’m running out of descriptions that make South Australia sound just as cool as Melbourne or Sydney – ‘uh we have a great wine region?’

There’s about five other Australians on exchange, and naturally we’ve gravitated towards each other, banded together in an effort to fight off any stereotype that comes along (no we don’t drink Fosters, how dare you!) There’s also a lot of Americans, Canadians and Frenchies on exchange as well. We’re all spread out across the uni but the thirty plus person WhatsApp group is keeping us pretty tightly knit. It’s been great fun freaking out the Americans with strange Australian slang, making them repeat it back like a real life Buzzed experiment. “She’ll be right? But who is she, and also who is old mate?” 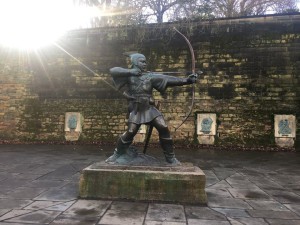 Statue of Robin Hood in the market square.

On every other afternoon we’ve been methodically sightseeing as much as we can of Nottingham. It’s truly a lovely place. Probably it’s greatest strength is its size – mid range in UK standards but maintaining that small town ‘Village Green Preservation Society’ vibe (We are the Skyscraper Condemnation Affiliates/ God save Tudor houses, antique tables, and billiards). I mean, of course there’s still a Primark, a couple of Maccas (free McFlurry if you flash your student card) and a very kitted out Waitrose (Woolworths on acid), but nestled in between you’ll find more gems – coffee houses hosting open mic folk nights, kooky comic book shops, and bars that will let you taste each beer on tap like its an ice-cream parlour. There’s a pub called Ye Old Trip To Jerusalem claiming to be the oldest inn in England, apparently a pit stop for knights heading off on various Crusades. Perhaps they could afford the five pound pint but I certainly can’t.

Of course, in Nottingham there’s a fantastic reverence for everything Robin Hood. Turn down Maid Marion Way, past the Little John Tavern, pick up some Friar Tuck Baked Potatoes and in the market square get a pic with the statue of the famous outlaw himself. I keep asking locals (usually bartenders) about their favourite on screen Robin Hood. So far I’m getting responses including Errol Flynn, Cary Elwes and the strangely attractive fox from the Disney version. Sadly no takers for Russell Crowe. 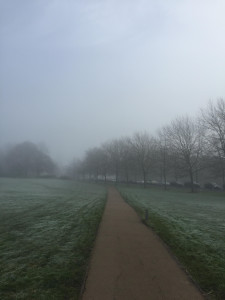 Despite Sherwood Forest being actually quite a long train trip away, there are some spectacular walks, usually taken on frosty Sunday mornings as hangover cures.

The university’s main campus surrounds a large lake, complete with swans and stepping stones. There’s a mansion over the way called Wollaton Hall that was used by Christopher Nolan for exterior shots of Wayne Manor in Batman Begins. Another gem.

Now that I’ve settled in, I’ll start spending weekends in bigger cities like Dublin, Edinburgh and London. Currently everyone is scouring Skyskanner for the dirt cheap Ryanair scoops. Nottingham a fantastic place, and it’s a privilege to watch it unfold before me, finding something new with every corner I turn down. We were joking the other day how a little too picturesque things were. I’m half expecting this trip to end like an Edgar Wright film – zombies, murderous cult, alien invasion – all eerily shrouded in English normalcy. Or perhaps I’ve just taken the movie references a little too far. 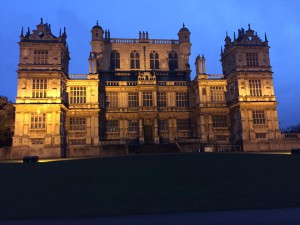