GLObewriter: Claire at the University of Southampton, submission 3

Claire Hale is studying at the University of Southampton for Semester 2 of 2016 and Semester 1 of 2017. As a GLObewiter, Claire is sharing her experiences with us every few months. You can start at the very beginning by reading her introduction. 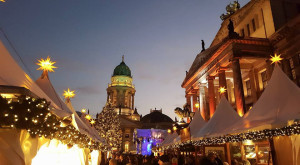 The Gendarmenmarkt Christmas Markets in Berlin.

My last entry was in December, before three weeks of Christmas break, and now we are a few days away from starting the Easter break here in Southampton.

During Christmas, I travelled to Europe, spending Christmas Day in Amsterdam and New Year’s Eve in Berlin. I also visited Prague and Vienna – two cities that I haven’t been to before. Spending New Year’s Eve in Berlin was spectacular, with our tour group at the Brandenburg Gate festivities. It was a weird feeling being at a place during New Year’s that is always on the TV back at home on the New Year’s Day news! During my trip, it was also the first time I saw snow! It was a great trip, and while I travelled by myself, I made great friends in the tour group – many whom I have caught up with since. 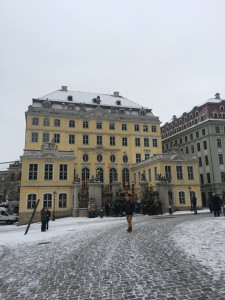 The Snow in Dresden (Germany). We stopped over in Dresden on the way to Prague.

All must things must end, and much to my dismay, I had to go back to semester 1 exams. Being a student from Adelaide (and probably just Australia in general), you get used to having a bit of a decent break between semesters. Well in the UK, if you are lucky, you may get a week and half if your exams are early – however my exams were at the end of the last week. This meant I had a weekend to ‘reset’ myself for my new subjects. It was definitely a shock to my set system of a 4 week break!

On that weekend between exams and the new semester, I travelled to Cardiff to meet up with fellow Adelaide exchange student, Jaedyn Meissner whom had just finished his semester abroad in Leeds. Being the politics nerds we are, we went and saw the Welsh Parliament – the Senedd. We also went to the Doctor Who Experience, which was very cool with the various costumes and props. Coincidentally, we were there the day John Hurt’s (War Doctor) death was announced. It was a sombre experience with memorials already being placed within the experience.

Beginning the new semester meant new subjects to be taken. This semester I am studying Democracy and the Modern State, Public Policy Analysis, Comparative Party Politics and a criminology subject, Criminology: Policy and Practice. Even though the transition between the semesters was quick, I now wasn’t ‘diving into the deep’ as such and knew most of the differences with teaching between Adelaide and Southampton. 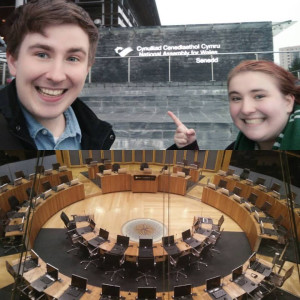 Jaedyn and I at the Welsh Parliament – the Senedd. Inside the Senedd they are very high tech compared to the UK and Australian Parliaments!

Over the course of the semester, I have taken a few day trips. Southampton is a major city within the South of England, which means that it is pretty easy to get trains to other cities. My first day trip was to Bournemouth, just 30 minutes by train. Bournemouth recently opened a cat café, and considering I am missing my cat quite a bit – I decided to go and visit! While I was there, I also saw Bournemouth Beach. It was the first time I had seen a beach since I left Adelaide, but it was a windy and rainy day – so definitely no swimming! I have also gone to Oxford, it was nice to wander around the old buildings which are just so quintessentially British. Oxford also has an abundance of Harry Potter merchandise within their shops – so it’s a must see if you love Harry Potter. My most recent day trip was to Birmingham, where I met up with a school friend who has just started a year exchange. I also went to Cadbury World, which was interesting to see how chocolate is made. I have also had the occasional day trip to London.

During the upcoming Easter break, I am taking a few more trips to the continent, however I will leave that until my next instalment! 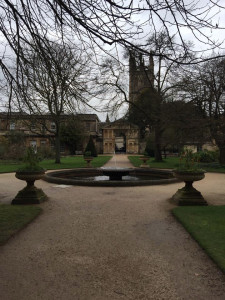 The University of Oxford Botanic Gardens 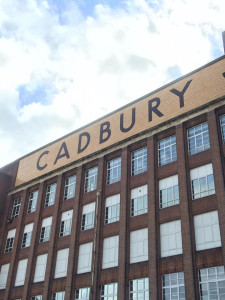