Claire Hale is studying on exchange at the University of Southampton in England, for a full year spanning 2016-2017. As a GLObewriter she is sharing her experiences with us every month. You can see all of her posts using the globewriter-claire tag.

My last entry was back in March just before my four weeks of Easter break. This allowed for a great amount of time to travel to the European Continent as well as the northern part of Great Britain. 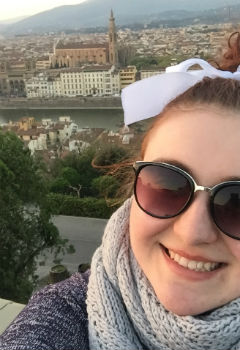 Up at the Piazzale Michelangelo overlooking a Florence Sunset

My first trip (after spending one day playing at the Softball Nationals for the University Softball Team – we won all of our games but unfortunately the team didn’t continue the success on the next day), started off on a week-long trip. Beginning in Rome, and travelling through Florence, Lucerne and Paris with visits to Vatican City, Pisa, the Western Front, Calais and Dover, my week was jam packed with sightseeing and lots of excellent food. No doubt my favourite city was Florence, which was absolutely gorgeous with its old buildings. Additionally, I conquered the challenge of eating Snails in Paris. They were surprisingly good!

Back in the UK, I spent 3 days in London where I finally got to see Harry Potter and the Cursed Child. I had bought my tickets for the show before I even applied for my exchange, so it was a very long time waiting to see the show. I was lucky enough to also see the original cast. The show was excellent and much better than just reading the script myself.

My next trip was to Amsterdam for 4 days to go to VidCon Europe. I am glad I took the opportunity to go to the inaugural event, where I met some of my favourite YouTubers like Charlie McDonnell, Mamrie Hart and Rhett and Link. This was my second time to Amsterdam during my time over here, and I was lucky enough to see the southern part of the city which still has a lot of culture, like the main area.

My final trip for the Easter break was around the northern parts of Great Britain. Starting off in Liverpool, this week-long trip went to a lot of places. We visited York, Leeds, Lake Windermere in the Lakes District, Carlisle, Gretna Green, Hadrian’s Wall, Edinburgh, Inverness, Loch Ness, Drumnadrochit, Oban, the Isle of Skye and Glasgow. My favourite cities were definitely Liverpool (reminded me a lot of Adelaide), York and Edinburgh. The most exciting part of the trip though was at Loch Ness, where our tour group jumped into the Loch. It was certainly very cold, considering the water temperature stays at a constant 7 degrees!

The beautiful view from Edinburgh Castle

I have done some other travelling during the term over the weekends. I have travelled to Manchester and Belfast. Both cities were lovely and I definitely would like to go back. I have also taken several trips to London. Southampton’s Train Station and Airport have excellent connections with planes to Belfast and Manchester as well as many European destinations and trains to London and Manchester. Some trains even go as far up as Edinburgh!

Alas, after my many travelling adventures, I had to go back to my final term at Southampton Uni. I am going to save my studying details to my final entry. 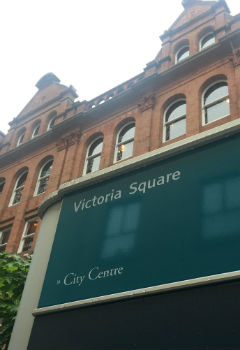 A familiar square in Belfast