Posted on September 7, 2017 by Chelsea Allen

Angela studied at Hosei University during Semester 1, 2017 as part of her Bachelor of Commerce with a Diploma in Japanese.

I decided to study abroad in Tokyo at Hosei University for the first semester of 2017. I have always been fascinated by everything Japan, and have done several trips to Japan prior to my exchange. I decided to spend my exchange in Tokyo because not only do I love travelling Japan, but it the largest city in the world. I have always loved cities so getting to experience living in Tokyo sounded like a dream come true. 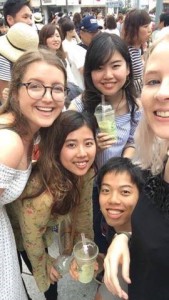 I remember arriving at my dormitory the first day, late at night, and collapsing in the bed of my typical Tokyo shoebox sized dorm room. The next morning I woke up early and was taken to my host university, Hosei University, by a group of other Hosei university exchange students. It was on my first proper day in Tokyo that I had my first true Tokyo resident experience, being pushed onto the packed 8:00 am peak hour train by workers at the station I was boarding the train. I remember frantically reaching out to grab a hold of my friend who was slowly being washed away from me by a sea of salary men (Japanese worker men), which I am sure looked very dramatic from the perspective of the surrounding Japanese people. The university orientation flew by, and at this point I don’t think I even had a chance to feel overwhelmed by the densely populated city.

During the first two weeks of my arrival in Tokyo I was lucky enough to experience Sakura (cherry blossom) season. It was truly breathtaking, trees all over Tokyo draped in a sea of pastel pink. I remembered seeing people everywhere I went in Tokyo sitting under the Sakura trees, cracking open a beer and drinking together. I thought this was strange until I was invited by some Japanese students to join them for Hanami (Sakura flower viewing) in Ueno Park. This basically involves sitting under a heap of Sakura trees, drinking alcohol, eating food and enjoying one another’s company. Basically all the good things in life. 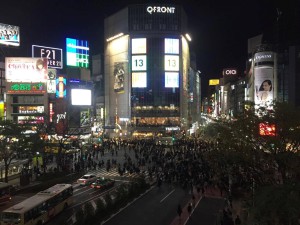 Eventually, as school work began to pile up it did begin to sink in how far from home I was and how polar opposite Tokyo was from anything I knew. I feel like it goes without saying that Adelaide and Tokyo have some obvious differences. I think at about the one month mark is when the culture shock really kicked in for me. At the end of the day a tall girl with light brown hair doesn’t exactly blend into a country as traditionally homogenous as Japan. It was hard to settle into a countries lifestyle when you are constantly treated like a tourist, even though you have a resident card and a national health insurance card. 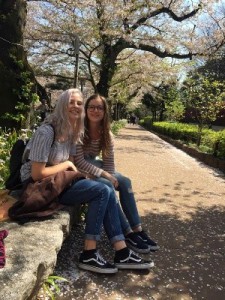 However, these feelings were quickly superseded by the excitement from meeting new friends and discovering what Tokyo had to offer. I made many friends from Japan and all across the world! I had my group of fellow exchange students who I would get curry with on Mondays and Ramen on Thursdays, as well as my dorm friends who I would get brunch with in Omotesando on Saturdays and sushi on Sundays. In between eating the incredible food I would be visiting various temples, teaching Aussie slang to my friends, shopping in Harajuku and even teaching English at various high schools. It was hard not to be distracted! 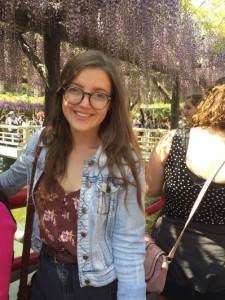 I’m now in my last week at Tokyo and I cannot believe how much I have done, and how much I have eaten. If you had told me I would be an advocate for raw fish by the time I finished my exchange four months ago I would have said “you’re dreaming”. This experience has been one of the best I have ever had in my life and will treasure the memories I have made and people I have met forever.