The GLO Alumni Series focuses on past students who have completed overseas study as part of their degree, and how these experiences have helped them in their future after university.

Tom Russell completed a double degree in Arts and Media, with Honours in Media, at the University of Adelaide in 2016. In 2015, he took part in the Japanese Media Industries and Cultures study tour to Kyoto, Japan – a two week intensive course in Japanese pop-culture. He currently works as an Assistant Language Teacher in Takahashi, Japan.

My decision to take part in this tour has had a big impact on my life – not only did I form some lasting friendships, I have also found myself returning to Japan after completing my degree.

My initial interest in the Japanese Media Industries and Cultures study tour began through my general interest in studying abroad. This interest was strengthened by hearing about the experiences of those around me and their time overseas. When I found that some of my fellow Media degree friends were applying for the program, I decided that I would too. I was introduced to Japan through learning Japanese in primary school, and since those early days I have found myself interested in exploring the country. I had been travelling overseas before – twice in Thailand, and once in the United States – and I thought it would be fun to return to Asia and finally experience Japan. So I applied for the tour, and I got in. Woo! 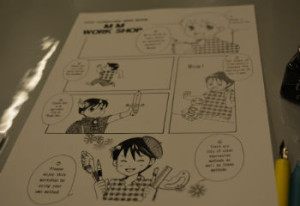 The Japanese Media Industries and Cultures program was run by Ritsumeikan University in Kyoto and was, of course, interesting and worthwhile. While there, we studied Japanese anime, film, television shows, and mascot characters. It was great to be educated about the periodic transformation of the Japanese anime medium, and to have an opportunity to understand the works of great live-action directors like Akira Kurasawa. Additionally, the significance of mascot characters in Japanese culture, from their impact on both ‘kawaii culture’ in Japan, and their role within the capitalist manufacturing industries, was surprising and fun to learn about. 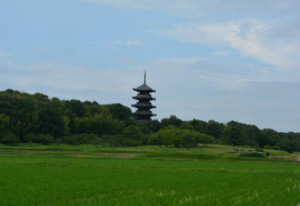 We also took part in tours outside the classroom, including to NHK Studios in Osaka, and the International Manga Museum in Kyoto, which were both great. As well as our two weeks in Kyoto, several students and I planned to use the extra winter-school time to travel some other parts of Japan. Together we visited Tokyo, Osaka, Nara, Hiroshima, and Okayama. On my travel I discovered many different things about Japan, but most importantly, I discovered that Hiroshima Okonomiyaki (egg and noodle pancake) is super good. You should definitely try it.

Although the tour itself was informative and useful, I found that the biggest lessons I took away from my experience were on a more personal level. While travelling the country with some of my University friends, I discovered that Japan is a place in which I could see myself living. It had long been a goal of mine to throw myself out of my comfort zone and live somewhere else around the world for a time, and I discovered during those few weeks that Japan was an
interesting possibility. 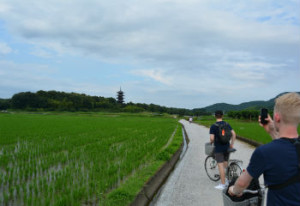 It was near the end of my Honours degree in 2016 that I discovered the Japan Exchange and Teaching Program (JET). This program is one of the largest cultural exchange programs in the world, and my experience in 2015 drove me to make an application. Every year, more than one thousand successful JET applicants are offered a year-long contract (which can then be re-contracted up to four times) to live and work in Japan as an Assistant Language Teacher (ALT) in classrooms all over the country. In my application, I selected Okayama prefecture as my preferred placement location. This decision was informed by one fantastic day that I spend in the prefecture riding bikes through the famous Kibi Planes with my friends, which is located in the heart of Okayama-ken. To my luck, I was not only successful in earning a contract with JET, but was also placed in Okayama! It is very rare to receive your preferred placement.

I have been living in Takahashi, located in the mountains of Okayama, for the past ten weeks and am enjoying the challenge of teaching large classrooms without any previous education experience. It has been daunting to live somewhere without knowing the language, and to be thrown into a job for which I have no background experience, but I am loving the opportunity and am learning more every day. I have quickly discovered that teaching could be another career prospect for me in the future. Thankfully, I am not alone in this journey, as two of my friends, one who joined me on the study tour, and one who completed my Honours degree with me, also gained employment through the JET program at the same time as me. It is a relief to know that we can share our experiences and guide each other along the way. Although we are both near and far, we often speak online and support each other. 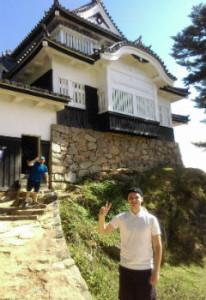 I am confident that my experience on the Japanese Media Industries and Cultures study tour helped my chances of acceptance into the JET program. Of course, the program’s main focus is on teaching English to students across Japan, but its major focus is to promote cultural exchange between Japan and English-speaking countries. The program looks for applicants who show that they are interested in this sort of cultural exchange, and those who have an interest in Japan. I believe that my participation in the study tour showed that I am one of those people.

I firmly believe that your University degree should include at least one trip overseas to experience a new culture. It is deeply satisfying to acknowledge that the cliche is true, and that these kinds of experiences open your eyes to new possibilities. If not for the Japanese Media Industries and Cultures study tour, I don’t think I would be living out here in the most beautiful countryside region I have ever laid my eyes upon, and would not be regularly experiences things that I used to think were for more adventures types of people. Just two weeks ago I ate a bowl of fried bees, some locally sources wild boar ribs, a plate of grilled bear and mushroom, and a shot of tequila from a bottle that contained a deadly pit viper.

I’m sure that I would be doing something interesting if I had stayed in South Australia, but for now, this is pretty cool and I’m glad that I’m doing it.