The GLO Alumni Series focuses on past students who have completed overseas study as part of their degree, and how these experiences have helped them in their future after university.

Ben Hauser completed a Bachelor of Media at the University of Adelaide in 2016. In 2015, he took part in the Japanese Media Industries and Cultures study tour to Kyoto, Japan – a two week intensive course in Japanese pop-culture. He currently works as an Assistant Language Teacher in Amagasaki, Japan.

As a part of my Bachelor of Media degree at the University of Adelaide, in 2015 I went on the ‘Japanese Media Cultures’ study tour to Ritsumeikan University in Kyoto, Japan, for two weeks. It was my first trip to another country, and also my first time on a plane. Organising my flights and accommodation on my own and only knowing one other person going on the study tour made me quite nervous about the weeks ahead.

Despite the (truly, awfully humid) weather, the trip was one of the best experiences of my life. I arrived almost a week before the study tour began and stayed in Osaka, where I visited some famous sights like Osaka Castle, the Kaiyukan Aquarium and the Dotonbori food district, as well as trying all the new Japanese foods I could in cosy restaurants. It was here that I met up with a group of other students on the study tour, who quickly became very good friends of mine.

The actual study part of the study tour was good too, even though for me the travelling part was more compelling. During our course at Ritsumeikan we attended many interesting lectures, watched a few Japanese movies, and visited many media-related sites in Kyoto. We learned how to draw action lines at the International Manga Musuem, how to sword fight from a real fight choreographer at Toei Studios, and saw the world’s largest TV at an NHK branch in Kyoto. We also visited NHK Osaka to see some real TV sets from famous Japanese drama series. 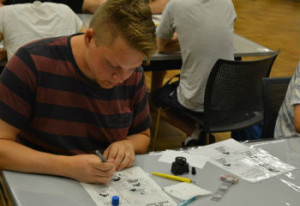 Outside of the classroom, we went on other small trips around Kyoto, including to the famous Golden Temple, or Kinkaku-ji, the Monkey Park and Bamboo Forest of the Arashiyama district, Nara Park to see the wild deer common in the area. We also spent some long nights partaking in all-you-can-drink karaoke. These trips, while very sweaty, were always a lot of fun, and strengthened not only my new friendships, but my love of Japan. It’s a country different to Australia in so many ways, yet it still felt familiar, despite the differences being some of my favourite parts of the country.

At the end of the study tour, we had to give a presentation about a potential mascot for Adelaide, referring back to what we learned about Japanese city and prefecture mascots, and received certificates for the program in a formal ceremony. I was sad to leave Ritsumeikan, as the staff and students were very welcoming, the campus was nice, and the cafeteria served some great food, but I was excited too, as some of us were soon heading to Tokyo. 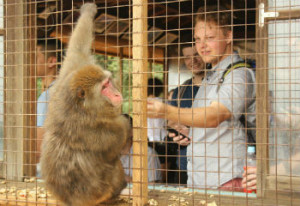 At the famous Monkey Park

I took the bullet train from Kyoto to Tokyo, with a stop at Nagoya in between, and arrived at the largest city in the world as it was getting dark. Tokyo is a truly amazing city, though a bit too busy for my liking. Kyoto and Osaka were more of my pace, and after a trip to stay near Mount Fuji on a day that was too cloudy to actually see the mountain, it was almost time to go home. On the last leg of the trip I met up with some other students and went to a Japanese baseball game, saw the Senso-ji Temple and nearby markets, went to the famous Harajuku, Shibuya and Akihabara districts, and spent too much money in a huge Japanese arcade. Even though it was a really tiring trip, it was amazing, and I was sad to be leaving everything about Japan (apart from the humidity). 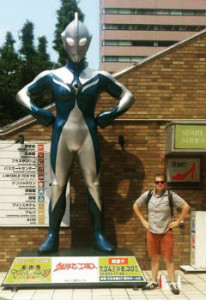 Posing with an Ultraman statue in Tokyo

A little over a year after getting back from the tour, I was reminiscing about it with my friends. One of them told me about the JET Program, a cultural exchange program that brings people from other countries to teach English in schools all over Japan. Before hearing about this, I’d never really thought about living overseas, but after doing more research and going to an information session on JET, I knew I had to apply.

After submitting an application in November 2016, I was informed that I was chosen for an interview in February. At the interview, they had specific interest in my study abroad program, and I expounded on my experiences in Japan, and how it gave me a great appreciation of the country, its people, and, most importantly, its food. I strongly believe my experience studying abroad helped me stand out among the other candidates, as I am writing this from my desk at a Hyogo Prefectural Senior High School in Japan.

I was lucky to be placed in Amagasaki, which is on the border of Osaka and Hyogo prefectures, and only a 15 minute train ride from Umeda station in Osaka, a huge transit hub. In the 3 months I have been living here, I’ve met many others in the same job as me, and the most common shared experience between us is studying or living abroad, not just in Japan, but other countries like Korea, China, Germany, and Sweden. I still keep in regular contact with those I met on the study tour, including Tom, who also wrote an article on his time in Japan and lives one prefecture over from me. Two other students from my study tour are also coming to stay with me during the holidays in December and January.

I strongly believe going on the study tour at university was important for my development as a person, leading me to move overseas, push myself out of my comfort zone, and experience new and different things almost every day. I almost missed out on my chance to study abroad while at university, and I’m glad I didn’t, because without it my life would be very different, and I surely wouldn’t be living in Japan today.