It has almost been a year since Adelaide University Alumnus Ryan Cunningham returned from Hong Kong, where he completed his final year of study as a Department of Foreign Affairs and Trade New Colombo Plan Scholar – one of 100 awarded for 2016.

Ryan is not unfamiliar with the region or international exchange. He previously completed his third year of studies at Tsinghua University in Beijing and attended the Hong Kong University of Science and Technology Global Leadership Programme. 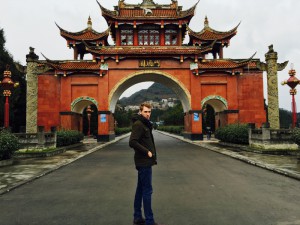 On return from Hong Kong, Ryan accepted a graduate position with the Department of the Premier and Cabinet in their International Relations Division. He was pleased to be back in South Australia and applying the skills he learned overseas.

The International Relations and Protocol team’s core role is providing international advice to the Premier and Ministers, managing diplomatic relations and our sister-state relationships; and coordinating overseas travel.

This involves research as well as frequently hosting foreign dignitaries in South Australia, and designing strategic programmes for their visit. As a central agency, the Department of the Premier and Cabinet is able to coordinate cross-government approaches to diplomatic engagement, often
coordinating high-level written briefings and advice on the
Department’s international engagement.

Ryan was surprised to learn of the dynamic nature and international opportunities within state government. Working for a central agency enables public servants to develop general skills and a broad understanding of their jurisdiction. Some highlights from his year include showcasing regional investment opportunities to Chinese investors, assisting with the Premier’s visit to China and hosting the Italian Foreign Minister. 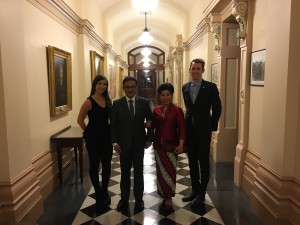 Ryan with HE Jan Adams, Australian Ambassador to China and other NCP scholars in Guangzhou

On applying and interviewing for a job, the greatest importance is being able to demonstrate your relevant experience, be it foreign language skills or previous unique work experience.

During many interviews, he was asked to provide concrete examples of work he had completed overseas. The NCP enabled Ryan to intern with CSR Asia, an Environmental, Social and Governance reporting firm in Hong Kong that he had followed throughout university. Through his internship, he was able to work with some of Hong Kong’s largest companies on their sustainability strategy, including the Bank of East Asia and Hong Kong Airport Authority and Oxfam.

This area of work might sound vastly different to advising the South Australian Government on its international engagement, but he was able to demonstrate that working in a global team with a range of stakeholders and writing skills were experiences that were directly transferrable. The interaction with senior government and business leaders in region provided by the NCP was also directly beneficial.

Living in the Indo-Pacific requires you to be adaptable and to be open to trying new things, and choosing the region clearly demonstrates this to employers.  South Australia is a small player in the global economy, and adaptability and an international mindset are strongly desired by employers. 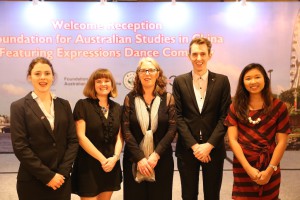 Ryan found that there were three key takeaways from studying overseas that he now gets to apply to his employment environment:

In conclusion, Ryan highly recommends anyone thinking of studying for any length of time in the Indo-Pacific to go for it, and find the most exciting and off the map location you can! As outlined in the recent Foreign Policy White Paper released by the Department of Foreign Affairs and Trade, the Indo-Pacific region remains to be the future of Australia’s engagement.

“I am part of a lucky generation that has greater accessibility to the Indo-Pacific than ever before, paved by individuals who faced tougher conditions in the region. Spending 2016 in Hong Kong was the year of a lifetime. The world-class study and work environment was invaluable to my career, and the travel and friendships were invaluable life experiences.”

Ryan graduated with a Bachelor of Commerce (International Business) and Bachelor of Languages (Mandarin) in April 2017. He is a vocal supporter of South Australia and its regions. Secretary of the Department and Foreign Affairs, Ms Frances Adamson, a University of Adelaide Alumna, recently mentioned Ryan in one of her public addresses for the Confucius Institute’s 10th anniversary public lecture.