Hilary D’Angelo attended the University of Oslo in Semester 2, 2017 as part of her double degree in Media and Law.

There is nothing quite like the Norwegian sky in early winter. It’s the palest blue, completely cloudless, and almost blinding amidst the freezing weather and blankets of ice and snow beneath. Calm, captivating, beautiful, but above all, inexplicable – just like this country, and I suppose, this whole experience.

The lake near Kringsjå Student Village

I began my exchange in Oslo on a rainy Friday at the beginning of August. I always thought that going on exchange was something I could never do. Although I had high admiration for my many friends who conquered it, I still firmly maintained that it wasn’t for me; it was simply too challenging, too far out of my comfort zone, and too unfamiliar. But that’s why I decided it was something I needed to do. As I stepped off the plane and into Oslo’s summer air, I was greeted with the same 16-degree weather that I’d left the day before in Australian winter. Adjusting to the climate would be no issue. But for reasons I’ll still never really understand, I thought that arriving a week before all other exchange students was a great idea. Spoiler alert: it definitely wasn’t, and I’d highly advise against doing this if you plan on an exchange yourself.

That aside, after I settled in and my time here truly began, I was enthralled by the whole experience. It was in this time particularly that I often found myself thinking ‘Is this even real?’ because it didn’t really feel like it. 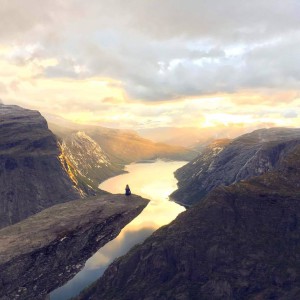 One of Norway’s most famous mountains, Trolltunga

On many occasions I felt as if I was just suspended from reality, floating around in a dream-like haze. On some level that almost made it harder to immerse myself in the experience, as I felt a little removed from it. But that didn’t negate the wonder of everything in front of me. I could go on spontaneous hikes with a group of strangers I’d never met and form instant bonds; I could eat wild blueberries in the forest; I could fill up my water bottle from the purest running water any time, anywhere – including from fresh streams; I could go on last-minute weekend trips with people I barely knew or had never met; I could take advantage of being a 5-minute walk away from the most beautiful forest/lake hybrid in the world; I could feel totally liberated by doing solo trips and navigating my way around a foreign place by myself; I could feel the rush of independence from staying at the same village as my friends – and leaving to and from activities with them, navigating our way together – and being able to catch up or make dinner together within minutes. The list goes on. But these were just a few of the most exciting at the beginning.

After less than two weeks, my friend compared exchange in Oslo to being stuck in a game. It was this temporary, crazy, challenging, yet voluntary experience that we threw ourselves into for a reason – we knew that overcoming the bizarre obstacles this country and this experience threw at us would be worthwhile. After all, people play games because they want to challenge themselves; they want to have fun, and they want to win. And that’s how it felt.

Have to sacrifice seemingly routine pleasures due to astronomical prices?
Part of the game.
Won’t even get served coffee in a pub due to being under 23?
Challenge 2.
Confronted with less than 6 hours of daylight from November onwards?
Level-up.

The thing about being an Australian on exchange in Europe is that you’re further away from home than most other students. Many of my friends had experiences that were bewildering to me: they went home some weekends, they were ‘dropped off’ by siblings or parents who came over with them to help them settle in, they could use their original phone cards, they never had to worry about maintaining relationships in an entirely different time zone, they didn’t feel the need to travel as much as they could while on this side of the world, because you know… they live there. Being in such a different time zone, further away from home than anyone does feel a little isolating. But there’s something quite surreal and exhilarating about it. Somehow, it’s like a time machine. And it makes you feel like you’re in the biggest bubble, which is in itself a little euphoric. Not to mention – people seem to be particularly fascinated by Australians, because didn’t you know – we’re home to the world’s most dangerous animals. 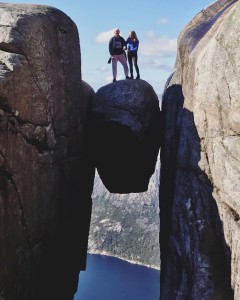 Another one of Norway’s most famous mountains, Kjeragbolten

I could have never anticipated that reverse culture shock could be a thing. But after nearly 5 months in this beautifully bizarre place, I think it will be. Maybe when I arrive home I’ll be looking for things that won’t be there: babies in high vis and matching jumpsuits all over the place, dads running with prams, people skiing down concrete stairs, vision dominated by the perpetual forest, dørene lukkes on the train, an actual working public transport system… But maybe the biggest shock of all will be when people suggest simple things previously unheard of, like going out for a meal or a drink, or an occasional coffee out – things that will suddenly be within reach of affordability. Things that, as routine as they are for many of us, I certainly learnt to live without.

As utterly cliche as it is, I learnt and grew more from this experience than I could possibly imagine. I had incredible times, incredible difficulties, and met incredible people with whom I know I’ll be friends for life. I climbed so many mountains and developed a weird yet very deep love for this unique place we call Norway. After all, I think I knew I’d assimilated (or, perhaps, just gone a little crazy) when I deemed the 2-degree weather “nice” and found $10 for one cider to be a screaming bargain.

So, I implore anyone who can to go on exchange. There will be rapid ups and downs for sure, but in the end I know you’ll win. If you’re considering Oslo and want some tips or have any questions then please contact me as I’d love to answer them!