Where Even Is Iowa? by Grace Cunningham

Grace Cunningham studied part of her Bachelor of International Studies at Simpson College in Semester 1, 2017.

Where Even Is Iowa?

Those were my exact words when I found out I had been placed at Simpson College for my semester exchange. I will be honest; Simpson College was not my first choice, but I had been set on the fact that I would study in the United States. I had applied for two big schools and put Simpson College down as my safety. I had done a small enough amount of research to know the state it was in, that I could study my degree there, and the student population. The thoughts that ran through my head when I saw that I was placed at a school with no more than 1,500 students varied widely: Should I even go? What is there to do in a tiny town in a tiny state? I’m obviously going to go, but what if it isn’t fun? to name a few. I had wanted to go to a big state school in a big city where the classes and social scene would be big. 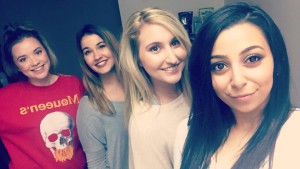 After the initial shock had worn off, I sat down and did a massive amount of research, starting with getting out a map and finding where Iowa is. I found out a lot of information about Iowa, the surrounding states (Chicago, Illinois is a mere five hour drive and trust me – it’s worth it!), and the fact that it gets very cold in the winter. I learnt that Simpson College is in a town called Indianola, a 20-minute drive from the state capital of Des Moines, and a thing called ‘Iowa nice’ (a theory that states that Iowans will treat you like family). I definitely encountered this throughout my five month stay in Indianola. 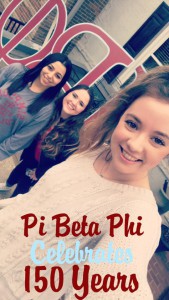 After my initial panic was over, I couldn’t wait for the next semester to finish so I could finally get to Simpson College and start my adventure. I was lucky enough to meet another University of Adelaide student who was also going to Simpson College at the same time as me, Laura, who would soon become one of my closest friends. I arrived in Iowa on a mild -12 day (if you attend Simpson bring lots of layers and big coats!) and I was taken to my on-campus apartment by Walter (Simpson Colleges International Student point of contact). I was pleasantly surprised by my accommodation, it was a spacious one bedroom, one bathroom apartment with a large kitchenette and living room area with all the basic furniture that was needed. I had one roommate, Andri, who was an exchange student from Norway. That semester there were four exchange students, Chloe from France, Laura from Adelaide, Andri from Norway, and myself. While on that first day we thought we would be the only international students on campus, we were proven wrong the next day when we went out for dinner with some of the other international students. They were from all around the world, from Nigeria to Mexico. The international student community was large and very welcoming from day one. From that day on, I was beyond grateful that I was at this school. 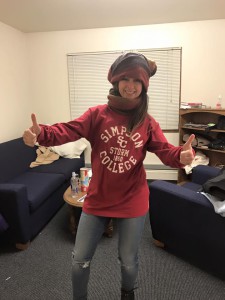 The campus is about the same size as the North Terrace campus. It is tree lined, often covered in snow, and has at least a dozen squirrels running around at any one time. The main building on campus is Kent Campus Centre, which includes a bookstore selling classic college apparel, a gym, and basketball courts (the weekly Wednesday night games became a tradition for me and the thousand other attendees each week). Kent also includes most of the on-campus eateries, including a smoothie and juice shop, Millie’s coffee shop, Au Bon Pain (selling everything from salads to soups), and also Tyler’s, a diner selling some of the best burgers around.

The classes offered at Simpson are made up of a small group of students, usually about the same size as a tutorial, never more than 35 in any class. Rather than a lecture and a tutorial, classes are a mixture of both. While I was looking through the course guide, the classes I found were by far quite different than the ones at most Australian universities. Classes at Simpson included the history of Harry Potter and many other non-typical study areas. Because of the small number of students in each class, a few of us would often go to one of our apartments, order tacos from the local Mexican restaurant La Casa, and do our homework. Everything at Simpson makes you feel included, social, and welcome (that’s the Iowa nice). 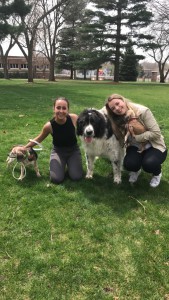 There are a lot of social groups on campus so there are often events each week, including international food week (for which Laura and myself made fairy bread), a celebrity fashion show (I was Iggy Azalea), finals week puppy play-dates, political and social marches, and the most surprisingly fun and busy event was Bingo. When I first heard that there were fortnightly Bingo nights I thought about skipping it, but I am so glad I didn’t. The majority of the student body would pile into a large hall, there would be music, food, and the prizes ranged from 50” televisions (Congratulations on winning that Laura!), Beats by Dre headphones, and concert tickets (21 Savage and Chainsmokers), all the way to jumbo boxes of Cap’n Crunch, peanut butter, and DVDs. Because of the small student population, all of these events were filled with friends rather than strange faces. It’s the same for the parties too – there are eight Greek houses on campus which would host a variety of events, including parties, but the majority of the social scene took place at individual houses and apartments across campus. The two international student houses, LU (the Latino house) and the Carver Cultural Centre, hosted many parties, including a Super Bowl Party and an Australia Day party. The international student community on campus tried to make myself and other exchange students welcome from day one.

Not only is Simpson College an amazing school, but it is also centrally located in the United States. Because of this, it is situated perfectly for weekend trips to Chicago, New York, Louisiana, California, etc., which is something that I would highly recommend taking advantage of.

Exchange will be the most scary but exciting time of your life and it is so totally worth it (especially if it’s at Simpson College)!