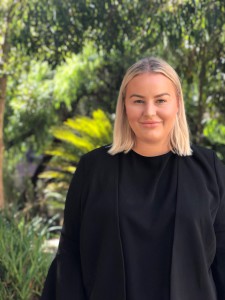 Katie told us she had previously travelled to Bali and her home country, Russia, but had never been away from home for a long period independently. Katie reflected on the highlights of her programs, stating that her favourite parts of her Mexico trip were visiting the Pyramid of the Sun and old Aztec pyramids. She also recalls visiting an AIDS clinic, which she said opened her eyes to how people in developing areas were struggling. She noted the conflicting contexts between culture and health, telling us the quality of the AIDS clinic was high and provided incredible support. In regards to her program in China, Katie reflected on visiting the Great Wall of China and going to karaoke with students from Shandong University. She also detailed her visit to the Centre of Disease Control in Beijing. She felt extremely lucky to have visited the Centre, as it is considered quite a prestigious privilege to visit in the US. The Centre manages a variety of epidemics and outbreaks, and is seen as an advanced facility by those in the health industry around the world. 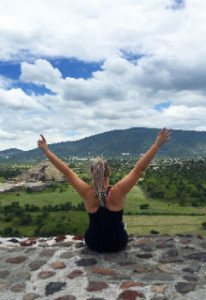 Pyramid of the Sun, Teotihuacan

We asked Katie about what she had learnt about herself while overseas. She told us, “I used to think that you’re not really an expert at anything in first year, then going into second year you realise that even though you’ve studied so much, you would struggle to answer a more advanced question regarding your study area. When I was overseas, I realised that I did actually have skills, and that I had learnt how to think critically. I used my knowledge to compare and contrast, and realised just how much I had learnt.” Katie felt that this made her more employable. She stopped asking yes or no questions, and instead began asking when, where, how, and why.

When Katie returned from her study tour to China, she realised that the quality of her work had improved. She was taking a more holistic approach to her assignments, and felt that this is what helped her land an internship with the South Australian Health and Medical Research Institute (SAHMRI). When she completed this internship, she was more motivated to apply for graduate programs. This time, not only was she searching for jobs, but she was searching and realising that she was qualified and had the skills and knowledge to apply for some that she perhaps hadn’t considered before. 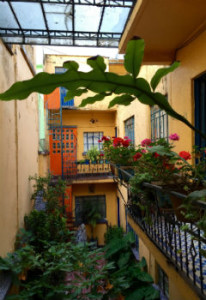 Katie felt that her overseas programs gave her a definite advantage in searching for employment. She explained “When you finish university and start searching for a job, everyone has a Bachelor’s degree. You’re all at the same level. Compared to those who perhaps didn’t have overseas study on their records, I definitely felt that I stood out a little more by including those experiences on my resume.” She found that in her job interviews, she was asked directly about her overseas experiences before she could slip them in to her standard responses. Professionally, she felt that she was able to show that she could apply her knowledge in a practical setting. She also found that those interviewing her had not had those same opportunities, and were extremely pleased that students were being offered these overseas programs.

Katie believes that in her professional environment (working in the public sector), having experience working with vulnerable people who are culturally and linguistically diverse provided her with the skills to speak about how she could apply her experiences to a new working environment. Since graduating from the University of Adelaide, Katie started working in Housing SA in the Department of Community and Social Inclusion. She was assisting with project work regarding support for people in terms of housing and homelessness. Katie then secured a position with Disability SA as a Project Support Officer, assisting with some of the changes to the National Disability and Insurance Scheme. On the day we conducted this interview, Katie revealed to us that she had just received a promotion – congratulations Katie! 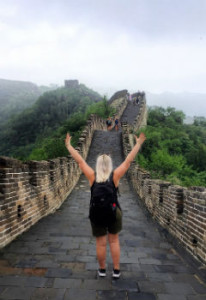 When she first began university, Katie did not know what she wanted to do with her career. She knew that she enjoyed health promotion, but also studied areas such as anthropology, ethics, and gender studies. Her overseas programs allowed her to study in different cultures and to see things from a different perspective by working in developing areas of Mexico and China with a diverse group of people, in some cases quite vulnerable people.

In the next six months, Katie is considering looking into further studies in Public Policy and Management. She believes in striving for change and hopes to one day be in a position where she can make positive change for those who need it. She also has plans to visit Europe with her partner, particularly Austria.

Katie’s overseas experiences showed her that taking part in an overseas program triggered a chain reaction of opportunities for her. As she told us, “I studied overseas, realised that I have skills, and a broader vision of public health and how the world works. I then started to do better in my assignments, and secured an internship as a result. I talked about the internship in my job interview and got the job. And now I’ve gotten a promotion. It’s a domino effect! Not immediate, of course, but my experiences definitely helped pave the way to get where I am now.”