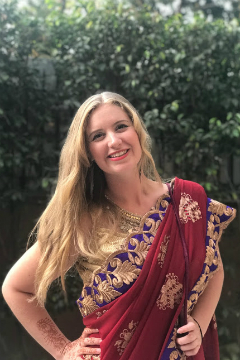 Cassandra Cook is currently studying in her third year of a Bachelor of Arts, majoring in Creative Writing and minoring in Anthropology. In February 2018, she took part in the Reimagining India program through the New Colombo Plan.

During the Reimagining India program, Cassandra spent a few days in Mumbai, before moving on to Jaipur and Delhi, with a small day trip to Agra. Cassandra explained to us that what initially drove her to apply for the program was hearing about how amazing the experience was from a friend. Despite having previously travelled, including teaching English in Vietnam and China, as well as trips to Japan and other countries in East-Asia, this was Cassandra’s first time to India.

We asked Cassandra if she had any particular highlights from her program, and she told us: “Two major highlights that just blew my mind were doing a Bollywood dance in front of the High Commission when we were in Jaipur – we had to practice on top of this hotel, and the sun was setting and we were dancing and laughing and it was just such a happy moment. Another was visiting this place where… it’s hard to explain, but here, if you lost your leg or another limb and needed a prosthetic one, it would usually set you back a few hundred or thousand dollars and you’ll be placed on a waiting list. At this place I visited, they made prosthetic limbs. A man from Pakistan came in, and he’d lost his legs in a train accident. We saw him crawl in with his wife, and four hours later he was learning to walk on new legs, which they had made for him that day. All for free.” 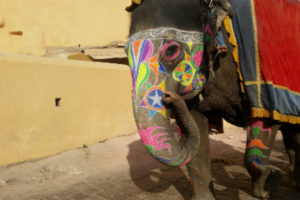 Cassandra also told us of a visit to a café run by victims of acid attacks: “It was initially a shock, but once you hear their stories you really see them as beautiful. Some of them were blind as well, but they were happy that they had their own place and were happy to be working there. They were also respected by the Agra community because they had pushed through a traumatic life event and built something positive from it – there were women from all over India coming to this café and it was a very enriching experience.” 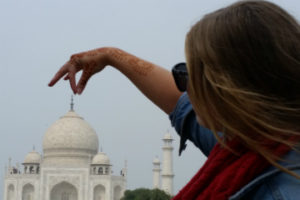 One of the main takeaways Cassandra had from her program was that she found her previous prejudices were completely challenged and overruled by seeing humanity at its absolute finest. She also discovered a love of meditation, which she has brought back to Australia with her and is now using in her youth work for the Tea Tree Gully Suicide Prevention Network.

Cassandra believes that travelling to multiple overseas destinations broadens your horizons, boosts your self-confidence, and gives you an opportunity to grow, meet new people, and learn new languages. 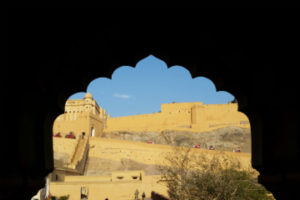 Now that she’s returned home, Cassandra hopes to further explore anthropological writing. She is considering returning to Dharavi, a slum community she visited in Mumbai, and interviewing residents with the help of an interpreter. During her program, Cassandra visited Dharavi and was fascinated by the residents, the stories they had to tell, and their eagerness to tell them. She is also interested in speaking to people from other regions of India and Nepal.

In the future, Cassandra hopes to use her overseas study experience to broaden her work in counselling and youth mental health support after she graduates. She believes it is important for people to understand what gratitude means, for example, those who may be living in poverty but are still happy and enjoying life. She feels she has a larger sense of appreciation due to her experience in India, which gave her perspective on global issues and made her realise that her own issues may initially be terrifying to her, but would eventually pass.

Cassandra’s Study Overseas experience was made possible by the New Colombo Plan.