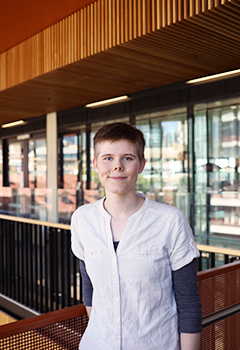 Rhona Hamilton is currently preparing to go on exchange to the University of Tokyo, Japan, in Semester 1 2019. Rhona is currently studying a Bachelor of Science majoring in Physics, and has also completed a Diploma of Languages in Japanese. As a recipient of a 2019 New Colombo Plan Scholarship, Rhona has been funded for her exchange and a two-month internship with a photonics laboratory at the University of Tokyo, as well as an additional internship at the National Astronomical Observatory of Japan.

We interviewed Rhona before her departure to Tokyo in mid-March. She had just returned from an internship in New South Wales, where she was working with CSIRO in their Space Science and Astrophysics group.

“The project was mapping neutral hydrogen distribution in nearby galaxies. It was really cool. There was a trip to the Australian Telescope Compact Array, which is in a town called Narrabri. I spent a week there doing observations. Most of the internship was data analysis, so I had to give a presentation and report at the end about my research. It was a really interesting experience.”

Rhona previously completed a study tour with the Mistui Educational Foundation in Japan. 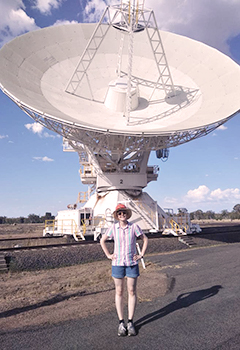 Rhona with one of the telescopes in Narrabri

“They select eight universities each time, and then one student from each university for the study tour, and it’s all expenses paid. It was jam-packed – we went around Tokyo, then to Kyoto and Hiroshima. We were able to do a homestay as well as lots of cultural visits. We also did business trips. Because Mitsui is a 総合商社 (sōgō shōsha), a generalised trading company, they have a lot of investments and involvement in supply chains, shipping, and distribution. They own part of 7 Eleven in Japan, own parts of airports, are involved with Nippon Steel… we heard a lot of presentations from these companies. It was really interesting, because it’s a lot of stuff you’re just not going to see as a tourist. It was a very internal view of Japanese business.”

When asked about her decision to study overseas for a second time, and to revisit Japan, Rhona reflected on her experience in learning the Japanese language and culture.

“Some people on the study tour spoke quite a bit of Japanese, but some spoke none at all. During the homestay component, I was staying with a family who had two little boys, about 7 and 4, and they didn’t speak any English, so we spoke Japanese the whole time. That was a terrific experience – they were so lovely.”

“I had been thinking about exchange for a long time. I did the Mitsui tour thinking it would be my ‘Japan university experience’, and then I would do something after my undergraduate degree. But the tour was so good, and it made me very aware of where my Japanese was lacking. I got good grades for my Japanese classes but I couldn’t understand the language in a cultural context, like casually speaking. It made me want to go back, and that email about NCP really solidified it. I really want to become fluent in Japanese.” 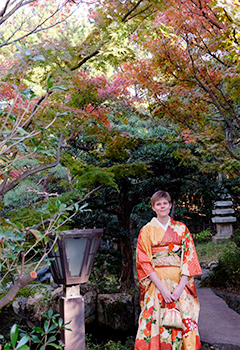 “I’m really looking forward to meeting my host family from the study tour again. We also had buddies who were graduate employees at Mitsui who showed us around Tokyo – I really want to see them again too. It will be different this time though, long-term, living and paying for everything by myself. I’d like to take trips out of the city on weekends or day trips on my days off. I want to meet more people too, and get more involved in University clubs.”

Here at the University of Adelaide, Rhona is a member of the Fencing Club. She hopes to continue this while on exchange by joining the University of Tokyo’s fencing club. She also told us the subjects she will be learning while in Tokyo:

“Half of it will be physics courses, like maths and information science, and some physical chemistry courses. Some courses will be Japanese language, culture, and history. I’ll take all of my courses in English, but will keep learning Japanese in those classes too.” 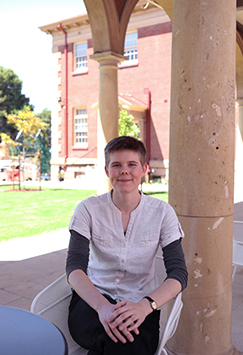 “I really want to work as a researcher in physics. I’ll also be learning a lot of soft skills, like living in a new country, working in a new academic culture, and learning new subjects. I’m looking forward to mixing Japanese literature and history with physics and science. The University of Tokyo is a research university too, like Adelaide, and each Faculty has a large graduate department. It will be great for networking with people in my field.”

When we asked Rhona where she would like to be in the next ten years, she told us she hopes to be in a postdoctoral position, perhaps in Japan. She would like to do research that she is passionate about and which contributes to the greater good. She hopes to build on the relationships she makes on her exchange and also explore teaching.

“I’ve never heard anyone say anything bad about travelling to Japan. It’s a terrific place to visit. I think that specifically for science students, Japan has a lot of investments in infrastructure for scientific research. It’s a huge part of their academic culture. Japanese universities are also trying to be more international, and I think there’s going to be a lot of support for international students. So you can start in your undergraduate degree, then in your future scientific career you will have all of these connections, like with people who have really neat particle accelerators or gravitational wave observatories – studying overseas really pays itself forward in the long term.”

Rhona leaves for her exchange in March. You can follow her experience on our Instagram at @uaoverseas.

If you’re interested in doing an exchange in Japan like Rhona, you can view our Japanese partners here.