Jordan Dekens completed the AIM Overseas program ‘Intensive French in Vichy’ in Summer School 2019. Jordan is studying a Bachelor of Arts, majoring in French Studies and Creative Writing. Please note that this post has been edited from the original blog on the AIM Overseas website. 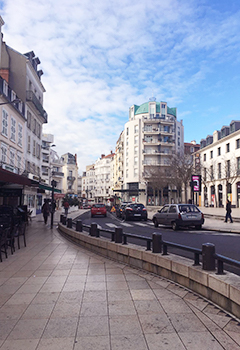 After leaving my family on an emotional New Year’s Eve and travelling for a few days in London, I made my way to the picturesque town of Vichy, France to start my Intensive French course at CAVILAM Alliance Français.

Vichy is straight out of a fairy tale. If I could just find a chateau close enough, I would think I were in Beauty and the Beast. Everything you need is within walking distance. The shopping district is a four minute walk, if that, in one direction meanwhile CAVILAM is a four or five minute walk in the opposite direction.

Through my two weeks in Vichy so far, we’ve ended up doing a bit of a foodie tour to find out where exactly to get the best food. In terms of baguettes, Maison Jouainnet is by far a favourite of most AIM Overseas students, including myself. I don’t think that anywhere can come close to making sandwiches like the French. There is a special place in my heart for the coffee machines in the foyer at CAVILAM, so cheap, so good. The crêpes deserve their own award, but I don’t think I’ve sampled quite enough to be entirely sure who takes out the title yet. In terms of hot chocolate, a little café hidden away called Keck’s Nature Store takes the cake (Le Petit Quebecois is my personal recommendation if you’re having something to eat). 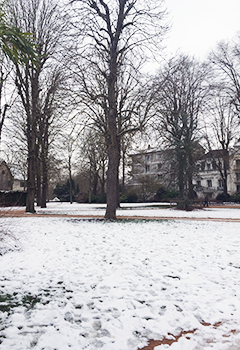 On arriving at CAVILAM, we all sat down and took the ‘teste de niveau’ to put us in the right class and chose between an oral or a written workshop as an elective for the afternoons. We all started to mingle and then we were off to class. We started to play a game to practice our speaking and responded to some challenging questions, like ‘what would you name your autobiography?’ We then had lunch, followed by oral language class where we introduced ourselves once again and started a class discussion.

The rest of the week started a routine with language class in the morning, then our chosen elective in the afternoons on Tuesdays, Thursdays and Fridays. There are no classes in the afternoon on a Wednesday at CAVILAM, and on Mondays, class starts at 11am and finishes at 3:30pm. In terms of what’s covered in class – all sorts – vocabulary, current events, discussions, debates, and grammar. Intense is a good word to describe this program – that’s how it feels being surrounded by French constantly. It is amazing to be learning so much and to be able to interact with people in your second language, but it seemed to all catch up with us by the middle of the second week. 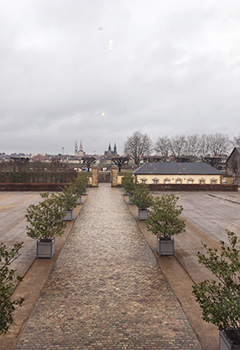 CAVILAM has an amazing cultural program ranging from excursions to movie nights. One night was the adorable film Les Choristes, which while emotional, is a highly recommended watch. Each week is different, with a range of activities to choose from to really immerse yourself in the French culture. In terms of excursions, while some chose to climb the volcano, a few of us decided to go to Clermont-Ferrand instead. Indulging in great cathedrals, a Duc’s house (with a nineteenth century version of a turntable so you wouldn’t have to reverse your horse out the driveway), fountains, and a little shopping.  The weekend before that, most of us trekked out to Moulins to go and see the costume museum, where a few of us had some fun with the costumes we could try. We saw costumes from famous Broadway musicals such as Cats, Singing in the Rain, Grease, Phantom of the Opera and my personal favourite, the clothes made out of curtains for the Von Trapp kids from The Sound of Music. We then did a little exploring, visiting a nativity scene in a cathedral, and found some much needed coffee and pastries.

One of the most amazing experiences I’ve had so far is meeting the people here. My host family is lovely and have tried their best to make me feel welcome. The teachers at CAVILAM are always happy to answer any questions or queries one might have. Our AIM Overseas group and the other students at CAVILAM are lovely, and I have made some great friends. Although, there is also irony in coming to the other side of the world and the majority of your new friends and the people you meet come from Adelaide and go to the same university as you. It’s a small world.

This entry was posted in Europe, Faculty of Arts, France, Student Experience. Bookmark the permalink.