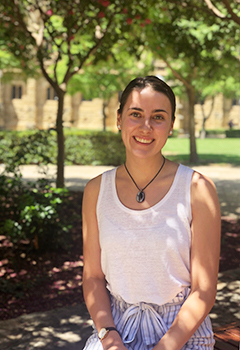 Mary Kelly is currently studying a Bachelor of Innovation and Entrepreneurship. At the end of 2018, she completed a Hacker Exchange program to San Francisco to learn about the start-up scene. Her time with HEX allowed her to return and further develop her own start-up. Mary is currently the president of the Adelaide University Entrepreneur Club and is also involved in the Adelaide Sustainability Association.

“I studied in San Francisco, particularly Silicon Valley, which is the start-up capital of the United States. The Hacker Exchange is a two week program for any student to learn about the culture of starting a business. You then work on your own business project which you pitch to a panel of judges at the end.
It was the most rewarding experience ever. It coincided with a lot of what I was learning in my degree. There were a lot of business students there, as well as engineering, science, law… people from everywhere. To them it was a lot of new stuff, but to me it was a lot of the same stuff I was covering in my degree, but in a completely different context – it was less about reading a textbook and more about how you can actually use and apply it.” 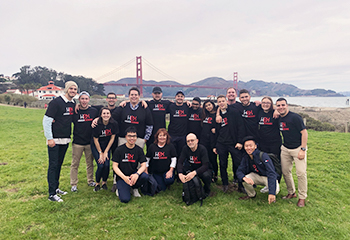 As President of the Adelaide University Entrepreneur Club, Mary has a lot of involvement in Adelaide’s start-up scene.

“A lot of the people that we met over there [in the USA] and who ran the workshops were actually Australian, so it was good to have them teach us about the cultural differences. I’m used to the business, so the environment was quite familiar. It’s very much about who you know and building those relationships. It’s as simple as setting up a meeting through a LinkedIn search – there’s always a way to build networks to get what you want and where you want, you just have to get yourself in the room. 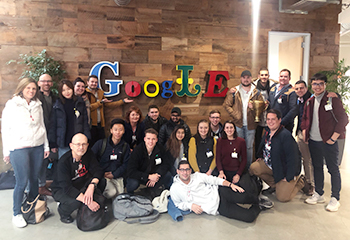 “We did a prototyping workshop. I know the start-up scene really well and I know how to network and connect with people – but in terms of my own ideas, I had no clue of how to go from idea to business model. I knew where I wanted to be in ten years, but I didn’t know what the actual process to get there looked like. In the prototyping workshop, they walked us through the process from developing an idea for a prototype to a full business model, and that kind of changed my perspective completely. It had been a roadblock for me, and once that was gone, I had a light bulb moment. It was exactly what I was there for.

I made a lot of great friends. I was on my own personal journey with my business, but I was able to get input from everyone else who was on the same page as me. We got mentorship from all these great CEOs, but it’s just as valuable to get it from your peers who are thinking in your perspective.

I learnt a little bit more about what I’m capable of. I started off knowing absolutely nothing about the start-up space, so this last year and a half has been snowballing a lot. I hadn’t quite realised how much I’d learnt and how many skills I’d picked up. I realised I actually do have quite a few capabilities. It reaffirmed that I was in the right space and that this was the right career pathway for me, which was good considering I’d transferred degrees a few times!

On opportunities she’s received because of the Hacker Exchange program, Mary said:
“They basically say that when you finish the program you have access to their network. If you’ve been in Silicon Valley and done the program, you have a bit more credibility and people are more willing to get in the room with you. If I need something, I can just say ‘Hey, I’m a HEX alumni’, and I’m more likely to get in the room with someone. I’ve also been appointed as a student delegate for their program. Having been there before, I feel more equipped to promote it than I did before. I get a lot of students who email the club and say that they’ve either got an idea for a start-up or they have a start-up but they need help finding certain things. When I first started I had no clue how to help them, but now I’ve got more of an idea, I know exactly how to identify where they’re at and how I can better help them. For me, that’s a huge benefit. I value being able to help other students.”

Mary is currently in the process of further developing her own start-up idea – Cleancup.

“It’s a virtual keep cup system. There’s been a bit of talk about the banning of reusable coffee cups because it’s become a bit of a hygiene issue. So we’d have to go back to disposables, which is not what we want to do. So this is a system where instead of purchasing a reusable coffee cup, you buy it as a token on your phone. When you buy your coffee you scan your token, it gets redeemed, and they give you your coffee in a reusable coffee cup. When you’ve finished drinking it, you give the cup back and get your token back. It passes the responsibility of cleaning the cup on to someone else. You can use the system anywhere that’s participating. So if you bought your coffee at one end of the city, you could drop it off at another participating place on the other end of the city. To start off with, the cafes and restaurants themselves would do the cleaning in their industrial dishwashers, but eventually once it’s large-scale, there would be a separate company that comes and picks them up to clean them. Kind of like how we currently have normal bins, recycling bins, and green bins – we’d just have a cup bin as well. It’s a good community initiative, because it gets all the cafes and restaurants involved. 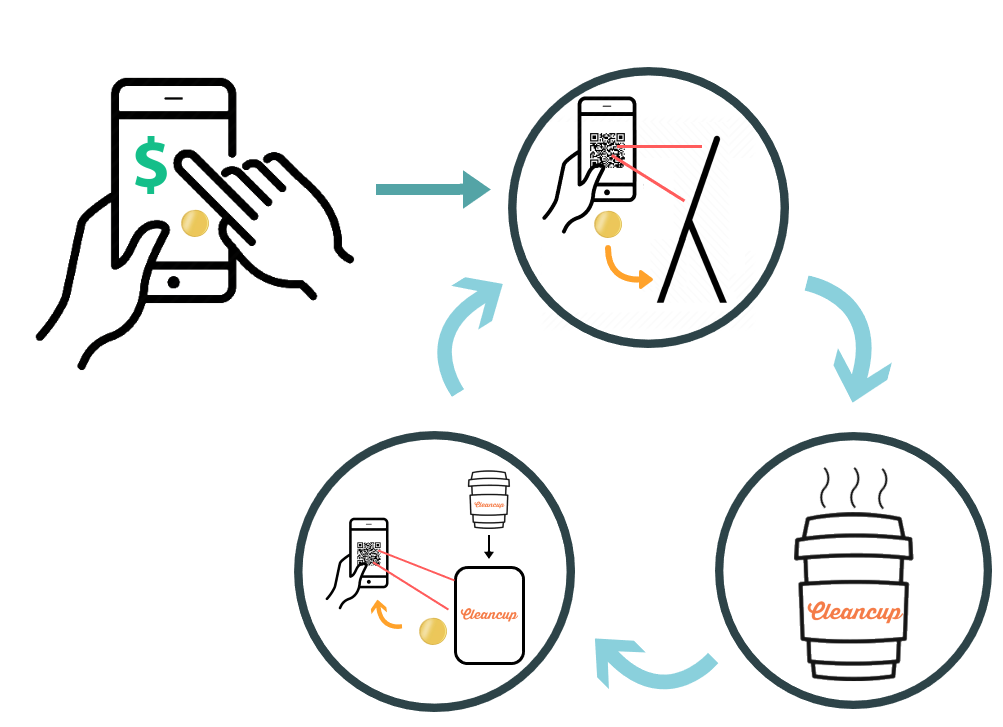 I’ve been speaking with the University about potentially launching it here. I’m 100% ready to build the app. I went to the US wanting to learn how to find a team and where to look, how to ask, and they gave us those tools.

An amazing thing about the program is that everyone is so passionate about what they’re working on. It’s not just a 9-5 job. To be in the start-up space, you have to love it. When you start it’s a lot of hours and hard work. It was great to work with like-minded people. When you’re building something, it’s good to be in that environment.”

Mary is currently in her last year at university and is a strong advocate for student clubs.

“Clubs are a huge part of my university experience, and this year I’m just working to make it amazing and be able to pass it on. The culture amongst clubs has changed a lot in the past couple of years. We work together a lot and it’s more about the students now. I want to pass it on successfully and make sure that positive culture continues, by building the student community. In my case, I don’t feel like it’s ‘finish study, start career’ – I already feel like I’ve started my career. That’s why I study part-time, so I can use my other time to get involved. It’s more than just going to lectures, you’re here for years so you may as well make the most of it. The first six months of university I was miserable and I didn’t have the community feeling. The more I got involved in clubs, and when I went on the Hacker Exchange, I started to love university.

When asked if she had any advice to give on students who may be considering studying overseas, Mary said:

“When I was on the HEX program, I gave a practice pitch to a guy who helps people with their TED talks. I gave my pitch and he goes “I don’t get it, why would someone want to carry a cup around with them?” And I was like “Well, actually it’s quite okay to do that in Australia”. But to them in the US, it was just silly. Understanding those cultural differences, I had to change my pitch to give the judges a bit of context. To make them understand why it’s a good idea. Studying overseas is the perfect way to learn new cultures so that you know the little things about business markets.

Don’t be afraid of the word entrepreneurship. I hate that word! When students think entrepreneur, they think they have to have this big idea or that they have to be really creative. They think they’re either going to make no money or they’re going to be the next Steve Jobs or Elon Musk. It can be applied to anything. It’s about having a different mind-set and how you approach problem solving. I would suggest taking even just one entrepreneurship class no matter what you’re doing. It changes your perspective and opens so many doors. HEX is a great way to do that as it puts you in the deep end. Either way, if you decide not to pursue entrepreneurship, you come out of it knowing what you’re capable of, what you like doing, what you don’t like doing, and you come away with skills that you can apply to anything. It gives you a little one-up in the world. You might meet people over there who are working in the space and realise you love it. Entrepreneurship is the best way to find what you love.”