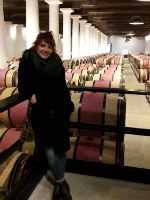 The second half of 2016 was particularly productive (and enjoyable!) for TC-IWP PhD student Ana Hranilovic. Ana flew to France in early July to spend six months at the ISVV (Institut des Sciences de la Vigne et du Vin), University of Bordeaux. The ISVV is among the world’s most reputable institutions in wine and vine research, with cutting-edge work done on wine microbiology and microbial terroir. Ana joined a highly prolific team consisting of Drs Warren Albertin, Isabelle Masneuf-Pomarède and Marina Bely, specialists in non-Saccharomyces diversity studies. Non-Saccharomyces yeasts are naturally present in the wine-related environment, but are far less studied compared to ‘conventional’ wine yeast that conducts wine fermentation, Saccharomyces cerevisiae. One such yeast is Lachancea thermotolerans, a species of remarkable oenological potential; as its partial fermentation can lead to wine acidification, lower ethanol content and an increased aromatic complexity. 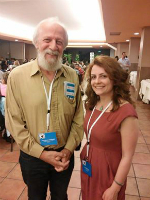 During her time in Bordeaux, Ana has undertaken a study looking at the diversity of a large set of L. thermotolerans isolates sourced from all continents and a variety of substrates, including grape fermentations from Australia, Europe and the Americas, forests in Canada and cacti in Hawaii. Some isolates showed genetic similarity based on their geographic origin of isolation, as for example all Hawaiian isolates were quite similar on the genetic level. On the other hand, certain isolates from wine and grapes were genetically close even when isolated from distant locations – e.g. samples from Australia, Europe and New Zealand. The follow-up of this study includes attempts to select a L. thermotolerans strain to be used in the wine industry to help address issues exacerbated by climate change, in particular increasing wine alcohol levels and insufficient acidity. Interestingly, while attending a yeast-related conference in Italy, 2015, Ana had an opportunity to meet Marc-André Lachance. Marc-André Lachance is an eminent Canadian yeast ecologist who can often be seen travelling to exotic destinations with his guitar and yeast isolation kit. He is also a person the  studied species (and the whole genus) was named after.

hile in Bordeaux, Ana also had the pleasure to interact with the European wine industry and she met a number of wine research fellows and winemakers during her studies as well as at events such as Vinitech, Tasting Bordeaux and an exquisite visit to Chateau Margaux.

This entry was posted in News and tagged Bordeaux, School of Agriculture Food and Wine, Wine science, Yeast. Bookmark the permalink.