Anzac is an acronym that stands for ‘Australian and New Zealand Armed Corps’, and is a term that was used during World War I (1914-1918).

Anzac Day is a public holiday held every year on 25 April, which commemorates the service of Australian and New Zealand soldiers throughout history. 25 April was the day that the Anzac forces landed at Gallipoli during World War I. The Australian War Memorial has more information about the origins of Anzac Day.

There are a few traditions that take place each Anzac Day: 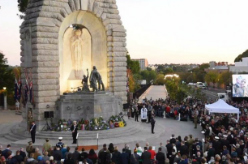 The dawn service is a ceremony of rememberence that occurs early in the morning of Anzac Day. It’s typically held at a war memorial monument. During the dawn service, a minute’s silence is observed, and the Last Post is played.

In 2018, the Adelaide dawn service takes place at 6.00am at the SA National War Memorial (North Terrace) 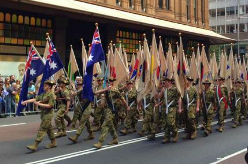 Following the dawn service, there is a march of ex-soldiers through the city. In 2018, the Anzac march take place at 9.30am from the SA National War Memorial (North Terrace). 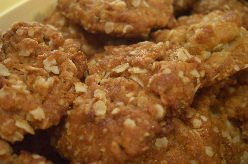 Anzac biscuits are sweet biscuits made from rolled oats and golden syrup. The story often attached to their origin is that they were sent by the wives of soldiers to their husbands on the front lines of World War I. This story remains unproven, but nevertheless there is a strong association between the biscuit and the Anzac story.

You can buy Anzac biscuits all year round (or make your own)  – they’re not just eaten on Anzac Day. 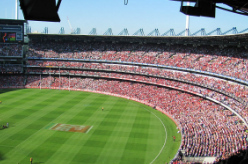 A more recent tradition is the game of Australian Rules football (AFL) that takes place on 25 April. The game is held at the Melbourne Cricket Ground stadium, between two Melbourne teams (Collingwood and Essendon), and is generally considered the biggest AFL event of the year, outside of the Grand Final in September.