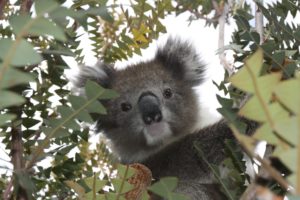 Image by Di Reynolds from Pixabay

Each week in our international student newsletter, we introduce you to an Aussie English phrase or word –  ranging from indigenous language to popular culture expressions. This list of collects all the terms that have appeared so far in the newsletter. Try some out during your time in Australia!

“About as happy as a tin of worms going fishing”

Example: “Sam has three exams on the same day. She’s about as happy as a tin of worms going fishing.”

Meaning: A person from Queensland.

Etymology: The term comes from the joking notion that Queenslanders spend all their time putting bends into bananas. Nearly all bananas grown in Australia are from Queensland.

Meaning: ‘To work clumsily or carelessly; something that is of inferior quality, or not the genuine article.’

Example: “My sandwich is falling apart, you did a bodgie job of this one.”

Both terms, ‘bodgie’ and ‘shoddy’, come from old manufacturing terms where the quality of workmanship was called into question. A ‘bodger’ was a woodworker that produced weak or inferior products. ‘Shoddy’ refers to pressing wool scraps together to produce yarn. In both cases, the term is used when the final product is sold at a normal price, despite being of lower quality.

Example:  “That class was bonzer; I learnt a lot.”

Advanced example: “That was absolutely bobby dazzler, what a great time!”

Meaning: ‘Bring a plate of food‘

if you’re invited to a BBQ or dinner party in Australia, you may be asked to
“bring a plate”. This means that you should take a plate of food with you to share (e.g. a salad), and not just take a plate with nothing on it!

Example: “If you don’t study for that exam, you’ve got Buckley’s chance of passing the course.”

Notes: There are conflicting theories about the origins of this phrase. One theory suggests it comes from William Buckley (1780 – 1856), an English convict who was transported to Australia, escaped, and then lived with an Aboriginal community for many years.

Explanation: “Bush” means somewhere remote or wild, and “telly” means television. A campfire can therefore be considered entertainment for when you’re in remote places.

Example: “Yesterday, I got a sparkie out to the house to look at the wiring. Next I need to get a chippie and a brickie around to fix up the patio.”

Meaning:  An abbreviation of “chock-a-block”, which means ‘to feel very full of food’.

Advanced example: “I couldn’t eat another thing, I’m jam-packed to the brim!”

Meaning: an expression of surprise. To cry out in shock.

Example: “Crikey! You scared me half to death!”

Advanced example: “Blimey! You should warn someone before you scare them, strewth!”

Meaning: A person from South Australia.

Etymology: The term has been around since the mid-1800s, though its origins are unclear. One account suggests that people from South Australia are called “crow eaters” because, during the early days of British settlement of the colony, a shortage of red meat caused people to eat various birds, including crows.

Although the origins of this term are unknown, a popular theory is they were named after a British clothing company in the 1930’s that made trousers with a self-supporting waistband.

Not to be confused with: ​Dim sum, which are authentic Chinese dumplings.

Example: (To a waiter) “I’ll have a couple of dimmies thanks. And some soy sauce please!”

Explanation: It’s rare for an Aussie to actually use the whole word ‘documentary’ when referring to a film or TV show documentary. The abbreviation ‘doco’ is much more common.

Example:  “Don’t listen to him, he’s an absolute drongo (and/or yobbo).”

Notes: “Drongo” comes from a racehorse in the 1920s named Drongo that consistently failed to win races. “Yobbo” derives from the UK slang word “yob” – itself an insult made from reversal of the word “boy”.

“Do a Harold Holt”

Example: A: “I didn’t see you leave the party last night.”
B: “Yeah, I did a Harold Holt around midnight.”

Etymology:  This phrase is rhyming slang for the phrase ‘to bolt’, meaning to quickly run away. Harold Holt was the 17th Prime Minister of Australia, who vanished (presumed drowned) in 1967 when swimming in the ocean near Melbourne. To ‘do a Harold Holt’ is therefore both rhyming slang as well as a cheeky reference to the disappearance of the PM.

Meaning: A planned question asked in Parliament by a member of a political party during Question Time, in order for a Minister to read a prepared remark in response. A Dorothy Dixer gives the Minister a chance to promote their work / attack the Opposition party. The term has a negative connotation.

Explanation: The name comes from an American advice columnist, Dorothy Dix, who was suspected of writing both the questions and answers in her column.

Example:  “Go chuck some ice in the esky before the drinks get warm!”

Though ‘Esky’ is a brand name, the term is used a generic word for all portable coolers in Australia. It is thought to originate from the word ‘eskimo’ to denote how cold it keeps its contents.

“Fair shake of the sauce bottle”

Meaning: “Give me a break”.

Example:
Person A: “You’re late!”
Person B: “Fair shake of the sauce bottle, mate. I’m only one minute late.”

Example: “I am just flat out with all my assignments!”

Advanced example: “I am going completely flat chat, full bore until exams are over!”

Meaning: A manufactured sausage meat product that is known as ‘luncheon meat’ elsewhere in the world. Fritz is particularly popular with kids.

Explanation: ‘Fritz’ is a term specific to South Australia, and the product is known as ‘Devon’, ‘Strass’, or ‘Polony’ elsewhere in Australia. It is a mystery why such a simple food has so many different names.

Meaning: An exclamation of surprise about something, usually in a positive sense. Similar to ‘My goodness!’

Example: ‘Hooly dooly, I got an HD on that assignment!’

Meaning: (Pejorative) A reckless and dangerous driver, especially someone who drives too fast.

Example:  “Get off the road you hoon!”

Origins of the word are unknown; however, it is suggested that it comes from the Scottish word ‘hune’, meaning a lazy, or silly person. A ‘Hoonmobile’ refers to the car that is being driven recklessly.

Example: “This restaurant is cash only and I don’t have any cash on me… can I borrow a lobster?”

“Mad as a cut snake”

Example:  “Be careful of that guy. He’s mad as a cut snake.”

The term has dual meanings as ‘mad’ can be interpreted as either ‘angry’ or ‘crazy’. In both meanings, it is used to caution people about a persons’ behaviour. A similar expression ‘mad as a gumtree full of galahs’, has the same dual meaning.

‘Nakutha’ [NAH-ka-tah] is sometimes spelt Nakkota, and is a traditional farewell from the Kaurna language. The expression can be repeated back to the speaker in response.

Meaning: The Kaurna phrase meaning ‘Hi, how are you?’ Find out how to pronounce this phrase, and learn more Kaurna words, here.

‘Niina marni’ [NEE-nah marr-nee] Means ‘hello’ in the Kaurna language (the Kaurna people are the traditional custodians of the land known today as Adelaide).

Learn some other common Kaurna phrases through this video from the University’s Wirltu Yarlu Aboriginal Education centre.

Meaning: ‘No worries / No problem’

Example:
Person A: ‘Thanks for your help with that assignment.’
Person B: ‘No wukkas mate!’

Meaning:  “I am not pleased with this situation.”

Etymology: This phrase is from an early-2000s TV advertisement for the Yellow Pages. The ad was so popular that its catchphrase “not happy Jan!” has remained in the Australian vernacular ever since. Watch the ad here.

Example: “Have you met Steve? He’s a real ocker Aussie.”

The origin of this term is a nickname for a person named ‘Oscar’. It grew in popularity and entered the Australian vernacular from a 1960’s television series. Abbreviating a name is to show affection or familiarity with someone. Australian culture has several common abbreviations where the name is shortened, and a suffix is added to the end like; “-o”, “-ee” or “-za”. So the name Shane becomes ‘Shano’, Elizabeth – ‘Lizzie’, and Gary – ‘Gazza’.

“Pull your head in”

Meaning: An admonishment telling someone to stop acting stupidly and behave themselves, or to mind their own business.

Example: “Pull your head in mate, you don’t know what you’re talking about.”

Meaning: A person from Western Australia.

Etymology: A ‘sandgroper’ is a type of insect that lives predominantly in Western Australia, and residents of that state have had the nickname since the late 1800s.

Example: “That Vegemite sanger I had for lunch was delish.”

Advanced example: “I think I will grab another sambo, I’m starving.”

Explanation: When someone says ‘seeya later’ in Australia, it doesn’t mean that they will literally meet you later, but rather is just a form of saying ‘goodbye’. Other forms include just ‘seeya’ or ‘later’.

Meaning: A schnitzel / parmigiana (which is a schnitzel topped with cheese, Italian tomato sauce, and ham). Both are very popular meals to have at pubs in Australia.

Advanced Aussie: On the east coast of Australia (Sydney, Melbourne, etc), a parmy is known as a ‘parma’. Be careful!

Example: “What a ripper of a day – chuck some snags on the barbie and get the dead horse ready!”
<Translation: “The weather’s nice today – put some sausages on the barbeque and get the tomato sauce ready!”>

Example: “I have three exams scheduled on the same day. Such is life.”

Notes: This phrase is famous as the alleged final words of Australian outlaw (bushranger) Ned Kelly. Ned was executed in 1880 after a crime spree that culminated in him wearing iron armour during a shootout with police at Glenrowan, Victoria. He also had an excellent beard.

Meaning:  Someone with a face of pure confusion and surprise (like the fish called the ‘mullet’).

Example: “Don’t just stand there like a stunned mullet, say something!”

The phrase refers to the wide-eyed vacant stare (and sometimes gaping mouth) of a fish that has been recently caught. A person typically looks like a stunned mullet as the result of a sudden shock or surprise. It can also refer to someone who is procrastinating or day dreaming.

Note: The same sentence pattern can also be found in other expressions; for example, “hot as”, “slow as”, “nice as”, as in:
– “It’s 40 degrees today, it’s hot as!”
– “I’ve been waiting for my meal for an hour, this chef is slow as!”
– “That tutor always leaves really detailed notes, she’s nice as!”

Meaning: Dinner. When someone ask you out for ‘tea’ in Australia, they are usually referring to an evening meal, rather than a drink of tea.

Explanation: When someone invites you to his/her house for tea, they’re inviting you over for dinner. This use of ‘tea’ meaning ‘dinner’ originated from the north of England, but is also common in Australia.

If someone is inviting you to literally just drink tea, they’ll generally invite you for a ‘cuppa’ (meaning ‘cup of tea’). Yes it’s confusing.

“To spit the dummy”

Meaning: To overreact, have a tantrum or behave like a child. The expression refers to a baby spitting out their dummy (pacifier).

Example: “Bob’s team started losing the game, so he spit the dummy and went home!”

Meaning: Tutorial (a type of class at university).  (Pronounced “Chew-t”)

Example: “We better not miss this tute, they are going through the exam today.”

It is common practice in Australia to abbreviate regularly-used phrases to one syllable where possible. There is an estimated 5000 abbreviations used in everyday Australian conversation, some might say that we are a bit addicted!

Meaning: A vehicle with passenger seats in the front and a cargo tray built into the rear. Known as a ‘pickup truck’ in America.

Explanation: The term ‘ute’ is an abbreviation of the word ‘utility’. The word is used in both Australia and New Zealand.

Synonyms: “Back of Burke” / “Beyond the black stump”

This entry was posted in Information and tagged Aussie English, Culture, Discover Australia. Bookmark the permalink.