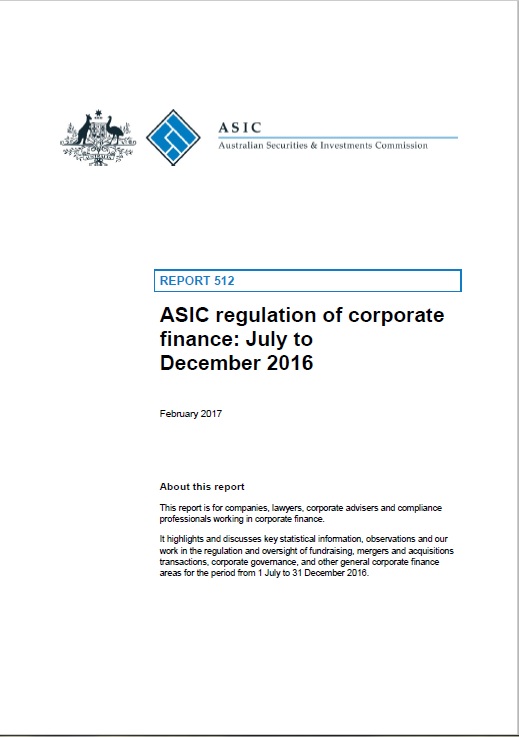 The Australian Securities and Investments Commission (‘ASIC’) hosted a Corporate Finance Liason meeting in Adelaide on 7 March 2017, along with similar meetings in Sydney, Melbourne, Brisbane and Perth, to discuss Report 512, encapsulating the last six months of regulation of public corporate finance activity in Australia.The report, released in February and available on the ASIC website, provides key statistical information and observations from the work ASIC has undertaken in the regulation of fundraising, mergers and acquisitions, corporate governance and other general corporate finance areas in the previous six months (from 1 July to 31 December 2016).

In relation to the issue of prospectuses, ASIC confirmed that they expect a prospectus to include:

In relation to marketing and disclosure, following up from Report 494, specific mention of the use of social media was made.  ASIC’s data indicates that small to medium sized firms tend to use social media for marketing IPOs more often, in particular emerging market issuers or technology companies targeting retail investors.  ASIC recommends that firms take careful control over the use of social media by their staff, to ensure that material is not released prior to the lodgment of the prospectus.

In relation to corporate governance, ASIC confirmed that shareholder-requisitioned meetings must be called and concluded within the two month period set out in the Corporations Act 2001 (Cth).  Directors are not empowered to extend this two month time limit, and may only seek a postponement or adjournment through court order.

Further, in relation to climate and cyber risk management, directors need to bear in mind appropriate and effective disclosure of these and other sustainability risks, where these risks could affect the achievement of financial performance or outcomes disclosed within the prospectus.  The report refers explicitly to the Centre for Policy Development and the Future Business Council memorandum of opinion by Noel Hutley SC and Sebastian Hartford-Davis, entitled Climate Change and Directors’ Duties.

The report also makes particular mention of the ASIC legal action in relation to Storm Financial Limited, ASIC v Cassimatis (No 8) [2016] FCA 1023, and the New South Wales Court of Appeal’s decision in Duncan v Independent Commission Against Corruption [2016] NSWCA 143, as being worthy of note in relation to corporate governance.

Dr Beth Nosworthy studied for undergraduate degrees in Science (Maths and Computer Science), Language and Law at the University of Adelaide, completing her Honours Dissertation for Law in 2003.  After graduating, she worked as an Associate in the Supreme Court of South Australia and as a commercial lawyer with an Adelaide firm, before moving to the […]