Last week, John Williams and Suzanne Le Mire appeared before the Senate Legal and Constitutional Affairs Committee to give evidence in support of the Adelaide Law School’s submission on the Courts Legislation Amendment (Judicial Complaints) Bill 2012 and Judicial Misbehaviour and Incapacity (Parliamentary Commissions) Bill 2012. Suzanne explains the submission, and what happened at the hearing.

On Friday, 11 May 2012, Professor John Williams and I travelled to Canberra for a hearing before the Senate Legal and Constitutional Affairs Committee.  Our appearance followed a submission on the proposed legislation that aims to set up a system for addressing complaints about members of the federal judiciary.  The submission, written by Ms Gabrielle Appleby, Dr Matthew Stubbs, Prof Geoff Lindell, Associate Professor Alex Reilly, Ms Anna Olynik , Mr Adam Webster, Professor John Williams and me, generally supported the proposed legislation.  The Bills formalise existing arrangements where the head of jurisdiction deals with complaints about judges within their jurisdiction.  They also set up a Judicial Commission to assist Parliament with the investigation of the most serious complaints with a view to making recommendations as to whether the removal of a judge is warranted.

Our main points in the submission were that:

Further information on the submission is available here.

Our submissions were very well received by the committee members: Senators Crossin (Labor), Humphries (Liberal), Pratt (Labor), Wright (Green) and Heffernan (Liberal).  Questions were asked about the inclusion of the High Court and the omission of heads of jurisdiction from the process. Senator Wright specifically wanted more information on our points about the need for accountability and criteria in the handling of judicial complaints and has encouraged us to develop a few points that we can send to the Committee for its consideration.

In relation to the Judicial Misbehaviour and Incapacity (Parliamentary Commissions) Bill 2012, the Committee members appeared to accept our point that difficulties could arise if serving judges acted on the Commission. However, they were concerned that if the membership of the Commission was restricted to former judges it might create a perception that judges were looking after their own.

The surprise of the day was Senator Bill Heffernan who at one point asked that the Committee convene in camera to hear some confidential matters. He had a number of large files. The Committee Chair, Senator Crossin, did not take up this suggestion. 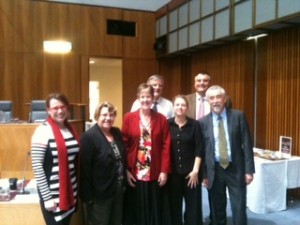 The full transcript from the hearing can be accessed through the Australian Parliament’s website, here.

Suzanne Le Mire is a Senior Lecturer at the Adelaide Law School. She is a specialist in legal ethics and the discipline of legal practitioners.